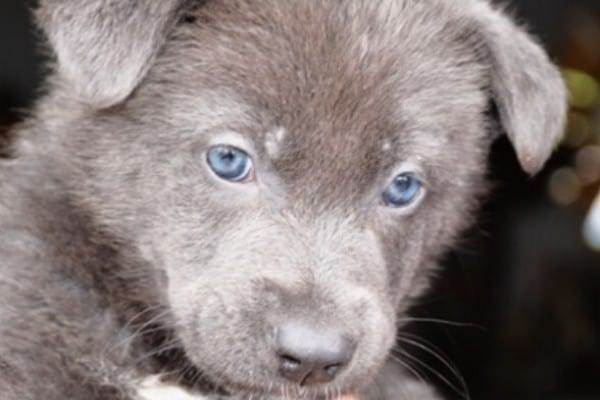 It’s no secret that large, purebred dogs often come with a high price tag, but what about large breeds still being developed that have not yet achieved official recognition, such as the Blue Bay Shepherd?

After the addition of several other breeds including Alaskan Malamutes, the newly emerging breed sports a rich, thick blue coat and a definite lupine appearance.

How much do Blue Bay Shepherds cost? A Blue Bay Shepherd puppy costs between $2,000 and $3,500. The price is mainly based on the decades of work that have gone into creating this new breed and the costs associated with the care and housing of the foundation stock, which included wolf dogs.

Once you take a look at the tremendous effort and responsible breeding practices required to produce the Blue Bay Shepherd and keep the line pure, you’ll understand why the purchase price is reasonable.

To find the exact price for males and females, you’ll need to contact the founder of the breed directly (contact information provided below).

It is possible that you’ll run across dogs marketed as true Blue Bay Shepherds at a fraction of the cost.

Be aware that true American Blue Bay Shepherds are currently only sold through Southern Breeze Kennels in Palm Bay, Florida.

Southern Breeze Kennels is the birthplace of the breed and home of the continuing development of Blue Bays.

All legitimate Blue Bay Shepherds are registered with a number and a certificate hand signed by the founder.

Any “Blue Bay” without this identification is not a Blue Bay Shepherd.

If you’re curious about how big they grow to be (hint – they’re certainly not tiny), read this article on Blue Bay size.

Interesting fact – A few Blue Bay enthusiasts formed what is called the Lycan Shepherd Project and are mixing Blue Bays with German Shepherds and Belgian Malinois to create what they have dubbed Lycan Shepherds.

Why Are They So Expensive?

Creating a new breed incurs a lot of expenses. Multiple breeds must be properly cared for and expenses like vet and feed bills quickly add up.

Additionally, building and maintaining expansive outdoor enclosures for the wolf dogs used initially is not an inexpensive endeavor.

The breed’s creator has more than 20 years invested in producing this exciting new breed, and we all know that time is a valuable commodity.

It’s only fair that she is compensated for her dedicated work with this dog.

Another reason these dogs are priced on the high end is to ensure that they’ll be well cared for by the new owners.

The thinking behind this is that a person who can afford the purchase cost will likely have the means to provide for the dog’s lifetime needs.

This is not meant to discriminate, but rather to put the dogs’ best interests first.

Will the Price Decrease Soon?

More than likely, the price of these beautiful dogs won’t drop for many years, as this is still a developing breed.

Although the breeder has a definite vision for the breed’s standards, she is still working towards this goal by tweaking certain features and traits.

Once a true standard has been established, a breed club has been formed, other dedicated breeders are involved in furthering the breed, and the Blue Bay is well on the way to full AKC recognition, prices may start to decrease.

Why Can’t I Find the Price Online?

The kennel through which all Blue Bay Shepherds are sold purposely does not list prices online. While this may be a little frustrating, the reasons for this are valid.

If prices were widely advertised, it wouldn’t be long before underhanded breeders attempted to reproduce the Blue Bay Shepherd’s appearance.

The resulting pups, of course, would not be Blue Bay Shepherds at all, but that wouldn’t prevent them from being marketed as such and offered at a discount price.

These cheap, copycat dogs would do serious damage to the true breed’s reputation and would undermine the founder’s decades of work.

When you consider the cost of other large dogs who also bear a resemblance to wolves, you’ll see that a Blue Bay’s price is quite reasonable, especially when you factor in the decades of work that have gone into this breed thus far.

Just keep in mind that the following prices are approximations and only apply to a pet-quality dog.

Are Blue Bay Shepherds Expensive to Own?

In many ways, the cost of owning a Blue Bay Shepherd is similar to that of any large dog.

It should be noted that only the most durable toys (check out the list of recommended toys we put together featuring only what we have tested ourselves) will do for these strong dogs.

They last a super long time, have no odor, are all natural, and contain essential nutrients such as calcium, phosphorous, manganese, and zinc.

Best of all, they’ll satisfy the instinctive need to chew.

Similarly, toys made of thick, natural rubber, like this wildly popular toy, would be suitable too.

They are practically indestructible, can be stuffed with treats like kibble or peanut butter, and bounce wildly when thrown, much to the delight of dogs, as this mimics the antics or pursued prey.

These are large, active dogs who need lots of daily exercise.

If you don’t already have a large, fenced-in yard, installing a secure perimeter for your dog to safely romp and play will be a rather large initial expense.

Special Consideration for This Breed

In some states, a permit and/or license, and sometimes special enclosures are required by law for any dog with traceable wolf background.

The associated fees will vary from state to state.

With some states, these laws and regulations even apply to dogs who only slightly resemble a wolf, regardless of whether there is any wolf content at all in the dog.

Even though the earliest Blue Bays were created with only one wolf hybrid parent and that parent’s wolf ancestry was five or six generations back in the bloodline, laws may affect Blue Bay ownership due to the lupine appearance of these dogs.

Other states outright ban any wolf dog hybrids, but in other states, it’s perfectly legal for a private citizen to own one.

We have a collection of articles dealing specifically with wolf dogs that will answer any questions you may have about owning one of these majestic canines.

A Blue Bay Shepherd may be viewed as a hybrid (though this is not accurate) or as a domestic dog, depending on the wording in your state’s laws.

There doesn’t seem to be any rhyme or reason for the differing laws, and it does seem unfair that a breed as gentle and temperament stable as the Blue Bay Shepherd is often discriminated against, but the law is the law.

It is highly recommended that you not only check your state laws but also county, city, and town ordinances before purchasing a Blue Bay Shepherd.

Because domestic dogs make up a large portion of the Blue Bay Shepherd’s DNA, many of these majestic-looking dogs will do well on a diet of high-quality kibble, such as Blue Buffalo Wilderness.

However, some Blue Bays, particularly those with a higher wolf content, will do much better on a raw diet.

If you choose to go this route, your veterinarian can provide guidelines to ensure that your dog receives all necessary nutrients.

Where Can I Find a Blue Bay Shepherd?

Currently, true Blue Bays can only be obtained through the breed’s founder, Vicki Spencer.

She can be reached through the following websites:

Can I Adopt a Blue Bay Shepherd?

The odds of finding a Blue Bay Shepherd up for adoption are very slim. There are two main reasons for this.

First of all, because this is such a new breed, there simply aren’t very many of them around yet.

They are only sold through the breed’s founder’s kennel, so even the availability of puppies is still quite limited.

Secondly, because of the Blue Bay’s incredibly good temperament and lack of negative issues, the vast majority of owners are extremely happy with their dogs and would never consider relinquishing them to a shelter or rescue group.

One option worth trying would be to contact the breed’s creator to inquire about any older dogs who may be retiring from her breeding program and are up for adoption, but know beforehand that this is a long shot.

Although this is bad news if you had hoped to adopt an older dog, these facts speak highly of the breed and point to an exceptionally bright future.