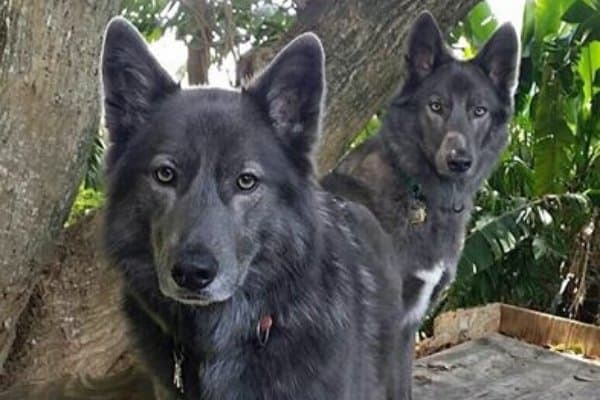 The Blue Bay Shepherd is an up-and-coming new breed that many people are not yet aware of, but this is one to definitely keep an eye on.

With mesmerizing eyes and an almost mystic aura, the Blue Bay Shepherd seems destined for greatness.

What is a Blue Bay Shepherd? The Blue Bay Shepherd resulted from the pairing of wolf dogs to blue Old German Shepherds and features a long, blue coat. Despite their large size, high energy levels, and distinct lupine appearance, these dogs have a gentle, affectionate disposition and are ideal family dogs.

If you love dogs as much as we do, you’re sure to find the newly created Blue Bay Shepherd particularly interesting.

Everything about this breed, from his early beginnings to his striking appearance is captivating.

The Blue Bay Shepherd is over 20 years in the making with the first litters being born in March of 2011.

While still in the development phase, this new breed is already showing established, highly desirable traits.

The story begins with a lady by the name of Vicki Spencer and her Southern Breeze Ranch in Palm Bay, Florida.

Vicki’s dream was to produce a large dog with a lupine (wolf-like) appearance and a willing, loyal nature.

She also wanted to produce a breed with robust health; an affectionate, gentle, stable temperament; the trainability of the German Shepherd Dog (GSD); and a deep blue coloration.

While that is a long list of lofty goals, Vicki also had a clear idea of features that she did not want in her dogs.

She was determined to eliminate traits such as the steeply sloped back and propensity for hip dysplasia of modern GSDs, aggression, timidness, shyness, dark eyes, and large ears.

To achieve her goals, Vicki bred her own wolf dogs, which she had been working with for years, to two European-imported, blue Altdeustsche Schaferhunds (Old German Shepherd Dogs – different from today’s GSDs) named Jordan and Passion.

The resulting litters were the foundation Blue Bay stock and considered to be F6 generation, meaning that the original wolf-to-dog pairing was five generations back in the line.

In order to protect her accomplishments with the breed thus far and to prevent unscrupulous breeders from attempting to use shortcuts to reproduce the “look,” Vicki has been rather secretive in revealing which other breeds were added to the gene pool.

However, she does reveal that a total of eight breeds played a part in the breed’s development.

We also know, based on Embark DNA testing, that, at some point, Alaskan Malamutes and Siberian Huskies were included in the mix.

You won’t be surprised to learn that the breed was named for the beautiful blue coat color and the location of the kennel, Palm Bay.

It certainly will be exciting to follow the continuing development and standardization of this breed as the founder strives to improve her line with each successive litter.

You’re bound to enjoy this clip from Animal Watch of an interview with the breed’s founder and a glimpse at some of the foundation dogs used to create this new breed.

Yes. Though there are likely people out there marketing their puppies as Blue Bay Shepherds, only dogs from Southern Breeze Kennels and their approved breeding dogs are true American Blue Bays.

Because only one person (and a few helpers) is overseeing this new breed’s development, the number of puppies produced each year is low, and thus the dogs are quite rare.

All Blue Bays are issued a registration number and a hand-signed certificate by the founder of the breed.

Without this proof, a dog is not a true Blue Bay.

How Much Wolf Is in a Blue Bay Shepherd?

Although the percentage of wolf DNA can vary quite a bit from dog to dog and dogs from earlier breedings may contain as much as 30%, most of the recent Blue Bays contain only a small amount of wolf DNA.

Vicki Spencer claims that the wolf dogs used to create foundation stock were already five or six generations away from pure wolf blood.

Now, the breedings taking place are between two American Blue Bay Shepherds, so wolf DNA percentage will only continue to decrease.

Most Blue Bays have a long, deep blue coat, and light green, blue, or brown eyes.

There is a clear resemblance to their wolf ancestors, but many GSD features come through as well, particularly in the shape of the head.

Blue Bays are slightly lanky in appearance but by no means are weak or frail.

They are sturdy, well-muscled, and athletic with upright ears and an intelligence that emanates from within.

How Big Will a Blue Bay Shepherd Be?

As mentioned, some variation can still be expected in the breed, but regardless of actual size, a Blue Bay will be a large, tall dog.

Most males will grow up to stand more than 30 inches tall at the shoulder and weigh between 85 and 105 pounds, though Blue Bays weighing 130 pounds are not unheard of.

Females are typically slightly smaller, weighing between 70 and 85 pounds and reaching a shoulder height of approximately 30 inches.

Do They Come In Any Other Colors?

Surprisingly, not all Blue Bay Shepherds are blue.

Though most will be blue, until this breed becomes standardized and consistently breeds true, other color possibilities include:

Note that puppies born with black and tan or blue and tan coloration often fade to much lighter colors as they approach adulthood.

In addition to sheer beauty, the Blue Bay Shepherd’s incredibly sweet, affectionate temperament is one of his most noteworthy characteristics.

In fact, after an extensive search, we were unable to find any evidence of negative personality aspects at all, which is very, very rare.

Granted, any dog’s temperament can be largely shaped by the way in which he was raised.

However, with this breed, credit for such a stable, gentle temperament must be given to the breed’s creator and her temperament-focused breeding standards.

Blue Bay Shepherds are nonaggressive, friendly, playful, and very sociable. They love people and typically get along well with other animals.

As a matter of fact, despite their GSD herding background, many Blue Bays have proven trustworthy around livestock and small animals.

How Energetic Are They?

Make no mistake. These are active dogs who can handle a 4-mile hike easily and still have energy to spare.

A large fenced yard is almost a requirement to allow them room to romp and play at will, but simply letting them out in the yard will not be enough to satisfy their exercise requirements.

Dog sports, such as agility and flyball, may be ideal outlets for this breed’s energy as these activities engage the mind as well as exercise the body.

Will the Blue Bay Shepherd Ever Be a Fully Recognized Breed?

Full recognition by major kennel clubs is, of course, the ultimate goal when creating a new breed.

However, that goal takes many years of dedicated work to achieve.

Before the American Kennel Club will give full breed recognition, certain criteria must be met.

You can see that Blue Bay Shepherds are still quite far from this end goal, but thanks to the extreme dedication and perseverance of the breed’s founder, this amazing new breed is definitely on the right track.