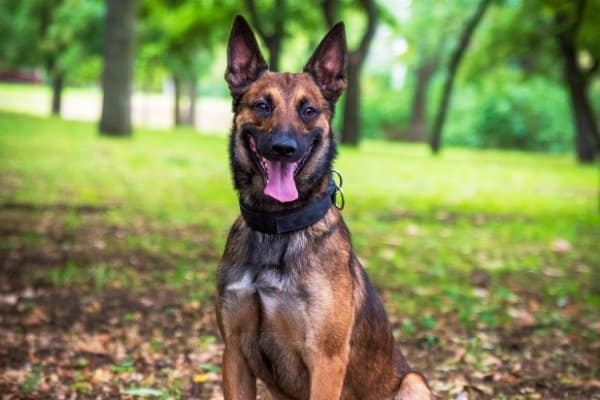 Have you noticed that police dogs seem to be a little bit smaller and sleeker looking than they used to be?

There are some very good reasons why police are using Belgian Malinois instead of German Shepherds or any other breeds.

Here is what you need to know about why the police use Belgian Malinois for all kinds of police work throughout the United States.

What Makes the Best Police Dog?

The police dog is a highly versatile working dog with the stamina to go all day. Police dogs may be trained in scent work, bite work, or both.

There are a few characteristics that are essential for any police dog who will practice both bite work and scent work.

There was a time when many police dogs were trained to be aggressive and could be difficult to handle. Those days are largely over.

Police dogs today are trained to have extraordinary self-control so that they can be released in a crowd and safely take down a target without harming bystanders.

Police dogs should also have perfect recall when being called back from an attack or chase.

Every police dog will be asked to put themselves in situations where they know that they are in danger.

They must be brave enough to leap into an attack even if they know they are physically outmatched.

They must also be willing to run blindly into dangerous situations without taking time to scope out their surroundings.

Police dogs must be strong enough to take down an assailant and agile enough to effectively chase after suspects even if they climb over something, are trying to escape in a car, etc.

Therefore strength and agility are essential in a good police dog.

A dog’s drive refers to how motivated he is to pursue a goal.

Police dogs must have very high drive because they need to work all day and be extremely dedicated to learning difficult and complicated behavior.

Why do Police Use Belgian Malinois?

Belgian Malinois have all of the characteristics that make a good police dog, and they are among the most agile dog breeds.

They have extremely high work drive and never-ending energy that allows them to work all day long and keep going well into the night.

Furthermore, these dogs have extreme bravery and are devoted to their handlers, which makes them able to take on any situation that they may face in police work.

German Shepherds used to be the standard for police dogs, but recently Belgian Malinois are replacing them in many police departments.

For instance, in the Los Angeles Police Department and the US Military, 75% of dogs are Belgian Malinois.

There are a lot of reasons that Belgian Malinois make a good fit for police work and why they are replacing German Shepherds.

However, German Shepherds are still a good option for police work as well. Here are some comparison points between them.

Belgian Malinois are smaller and more athletic then German Shepherds. They are so athletic that they are even able to do things like walk across a tightrope and climb a tree!

Surprised? Wait till you see them in action in this video.

While German Shepherds are bigger, Belgian Malinois are so intense that they manage to pack nearly as much of a punch as a Shepherd.

That said, when you need a heavy, powerful dog to take down a big person, the German Shepherd is still an excellent choice.

Belgian Malinois have even higher work drive than Shepherds.

Like most herding breeds, German Shepherds are well known for having very high work drive, but Belgian Malinois have even more intensity for work.

They keep going all day long and seem almost tireless.

Furthermore, Belgian Malinois tend to have single-minded focus on their work and may be less likely to be distracted.

German Shepherds have a distinct shape with a slanted back and angled hips. This is largely due to the fact that they have been bred for show purposes rather than for work for a long time.

Unfortunately, this particular shape makes them more prone to hip and back problems.

Because it takes so much money and time to train a police dog, it is essential that you invest in a dog who can perform for some time after being trained.

Both German Shepherds and Belgian Malinois have an excellent sense of smell and are dedicated to scent work.

However, because Belgian Malinois have a stronger work drive in general, they also tend to have a higher work drive when it comes to sniffing out scents.

The increased energy and athleticism of the Belgian Malinois mean they are more likely to follow a smell wherever it goes, whereas a German Shepherd may be deterred by obstacles.

Why are Belgian Malinois Replacing German Shepherds as Police Dogs?

Some police departments, such as the Ventura County Sheriff’s Department, have no intention of switching from German Shepherds to Malinois.

They think that their Shepherds have a steadier and calmer temperament than the Malinois, able to do a good day’s work as police dogs and also mingle with children at school events.

However, this mentality is in the minority for most police departments in the United States.

After all, the primary goal is a dog who can do excellent work, and it is hard to argue that the Belgian Malinois isn’t the better worker of the two when it comes to most of the jobs that are important for police dogs.

Some people still worry that the Belgian Malinois is too high strung and won’t do as well in groups of pedestrians, but handlers working with Belgian Malinois find them to be just as steady as German Shepherds with civilians.

Perhaps the primary reason that Belgian Malinois are replacing German Shepherds is simply their work drive.

Belgian Malinois are willing to work all day long and they are always happy and enthusiastic about doing their work.

They are absolutely fearless and utterly devoted to their handler. With proper training, their innate intelligence gives them excellent self-control.

When you add in the greater health of the Belgian Malinois over the German Shepherd, it is not at all surprising that Malinois are overtaking the Shepherd in popularity throughout the U.S.

In many disciplines that are extremely important, such as seeing-eye dogs and police dogs, dogs may be purposely bred across breeds in order to arrive at an ideal work dog.

Various types of Golden Retriever and Labrador crosses are useful for seeing-eye dogs, and when it comes to police work, a Belgian Malinois crossed with a German Shepherd is an excellent working dog.

Mixing the breeds allows some of the best aspects of each to come out, although these traits are also less predictable.

Ideally, a mixed breed dog will have the tenacity and superior health of a Belgian Malinois along with the size and calm temperament of the German Shepherd.

How much do Belgian Malinois cost?

Well-bred Belgian Malinois with some basic training for police work cost about $6,500 each. By contrast, a good working German Shepherd might cost as much as $10,000.

This is largely because Belgian Malinois have fewer innate health problems, and therefore it is easier to get a healthy one.

Are Labradors good for all types of police work?

Labrador retrievers are well known as America’s favorite dog and are a good fit for some kinds of police work as well, but they do not do well with any kind of bite work.

Labradors love people and never meet a stranger. It’s just not in their nature to show the kind of aggression that is required for a dog to do well in bite work.