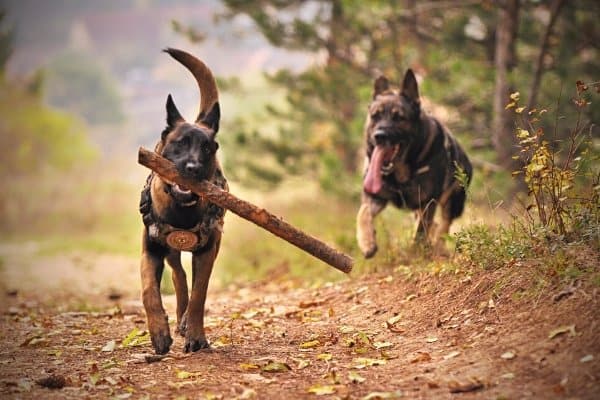 Many people wishing for a dog similar to the ever-popular German Shepherd but yet uniquely different in their own right often opt for a Belgian Malinois.

While this breed may not be the right choice for everyone, dedicated fans praise the Begian Malinois’ loyalty, trainability, intelligence, and confidence.

Curious to learn more about this hard-working breed? Enjoy the following 13 fun facts about the Belgian Malinois.

1. The Malinois is one of four closely related breeds of Belgian herding dogs

The Belgian Malinois is one of four breeds of dogs that developed in the northwestern area of Belgium.

All four of these breeds were developed to be herding dogs, but they all have distinct characteristics and appearances.

The Belgian Tervuren looks similar to the Belgian Malinois but has a longer coat with a thick mane around the chest and neck.

These dogs tend to have a mellower personality than the Malinois but are still very energetic.

The Belgian Laekenois is a very unusual dog that is rarely seen outside of its native Belgium.

They have a unique, rough coat that appears almost wiry. The coat is generally tan or wheat in color.

The Belgian Groenendael, or Belgian Sheepdog, is a majestic black dog with a long coat.

They tend to be a bit more sensitive than the Malinois but are still very active dogs.

2. The Belgian Malinois is named for a Belgian City

The Belgian Malinois comes from the Belgian city of Malines and still carries its name. These dogs were prized as herding dogs and protectors of the family in their native area.

Unlike the other three Belgian sheepdogs who were largely bred for looks as well as function, the Malinois was bred entirely to be a workaholic.

They were able to herd sheep for long days over the fields of Malines and also drive them through the narrow city streets when necessary, thanks to their excellent control.

3. Belgian Malinois have worked with American police officers for a hundred years

As early as 1908, Belgian Malinois were working with the New York City police force.

The breed was barely recognized in the U.S. at the time, so it is remarkable that they were so rapidly prized for police work.

This fact points to the breed’s incredible capacity and natural affinity for police work.

Belgian Malinois have a long history of being military dogs.

They even served as assistants and messengers to the Red Cross and may even have pulled carts carrying ambulance supplies and firearms during World War I.

This breed’s remarkable versatility made them great all-around workers during the war.

In 2011, a Belgian Malinois known as Cairo helped a U.S. Seal team take down Osama bin Laden. The use of this dog in this most important of jobs points to the breed’s dependability.

The Malinois is fast and agile enough to do some work even more effectively than a trained soldier would be able to.

Belgian Malinois are brave and driven to protect their families, which means they’re excellent personal protection dogs as well as being great military and police dogs.

Even actress Eva Mendes trusted her Belgian Malinois named Hugo to keep her safe when she took out a restraining order against a stalker.

7. Bred for work, not style

Belgian Malinois are striking, beautiful dogs, but their appearance is entirely a result of function, not intentional breeding for looks.

Belgian Malinois were always bred by devoted dog people who cared more about a dog’s functionality than the appearance.

Breeders of Malinois wanted to put showier dogs to shame with their efficient working dog.

Thus, this breed stands out in contrast to more stylish breeds like the German Shepherd or Groenendael.

Belgian Malinois are naturally quite reserved with strangers and are brave enough to protect their family from attack.

Any dog who is going to be asked to do protection work should have specific training, but Malinois tend to be natural guard dogs provided they have a strong bond with their family.

Because Malinois are natural guard dogs, it is essential that you provide careful socialization and direction for them.

Without proper training, Malinois may try to guard against friends and family or may show a preference for one family member and guard them from other family members.

It is essential that your Malinois know when they need to stand down and when it is appropriate to guard.

9. Favorite Breed of the Navy Seals

Belgian Malinois are favorites of Navy Seals, despite the fact that they were not originally bred to work in the water.

What’s most important for a Navy Seal dog is bravery and willingness to leap into the moment.

Belgian Malinois are small and light enough that they can be strapped to their handlers during a skydive.

They are also intelligent and brave enough that they can be trained to jump out of airplanes with parachutes on their own, land, and get the job done. Pretty impressive, huh?

Unfortunately, Belgian Malinois are frequently purchased by owners who are not up to their intensity, and therefore they end up being abandoned.

It is not uncommon to find this dog in shelters, and it is easy to get a Malinois through a breed rescue since breed rescues are generally quite full.

This is one of the dogs that is too often acquired by people with unrealistic expectations and a lack of knowledge about the breed.

Some people imagine themselves being non-stop athletes who want a dog who can keep up. In reality, very few people are as energetic as a Malinois.

Add to this the fact that the Malinois can be quite stubborn and determined without proper training and handling, and you get a recipe for abandonment.

Unlike many large breed dogs who rarely live past 10 or 12 years, the Belgian Malinois is quite a healthy and long-lived breed.

You can expect your dog to live 14 to 16 years, and they will likely be quite energetic the whole time.

While this breed does suffer from typical issues that plague large dogs, like hip and elbow dysplasia, they’re less likely to experience these issues than most other large breed dogs.

The pricked ears mean they are less susceptible to ear infections than some other breeds, and allergies or other skin issues are fairly uncommon.

This is a mistake.

The Belgian Malinois is quite prone to shedding, and sheds profusely seasonally.

Regular brushing with a pin and bristle brush or rubber grooming gloves helps to shed loose hair and distribute oils for the health of the coat.

13. The Malinois is still a great herding dog

The Malinois was originally bred to herd livestock, especially sheep, and they are still excellent herding dogs today.

Malinois are used across the world to herd livestock, so you can expect any given Malinois to display strong herding instincts.

It is important to keep in mind that because Malinois display herding instincts regardless of training, you may find your pet Malinois herding your children or other pets.

It is important to direct or channel these instincts appropriately.

Who should get a Belgian Malinois?

You should only get a Belgian Malinois if you have a specific job in mind for them to do.

These are dogs who need lots of training and active engagement and will not tolerate being treated like house dogs and only taken on a couple of walks per week.

If you don’t have an active job for your Malinois to do, you should have some kind of game or competitive activity that your Malinois can treat as a job.

These dogs excel in competitive Frisbee, agility, and other dog sports.

Is it a good idea to adopt a retired police Belgian Malinois?

If you have your heart set on a Belgian Malinois, you have the choice of buying a puppy or adopting an adult dog.

Many Malinois are retired from the police department every year, and while most are adopted by their handlers, this is not always an option.

Adopting a retired working dog is a great idea, provided you understand their unique needs.

These dogs are generally very well trained and ready to form a powerful bond with their owner, but they must be transitioned from a life of work to one in which play is work.

You’ll need to be ready to train your dog to substitute Frisbee or fetch for hunting bad guys.