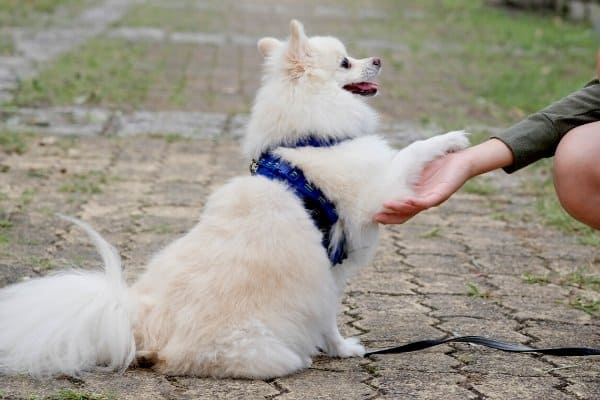 The Japanese Spitz is not very well known in America, largely due to their relative rarity compared to similar breeds like the American Eskimo Dog.

However, this is a very distinct breed with lots of unusual characteristics.

What are some Japanese Spitz fun facts? The Japanese Spitz has all kinds of surprises in store, from their German ancestry to their unusual standing with the AKC, to a coat that seems to keep itself clean. These dogs are surprisingly adaptable to most families, but prepare to deal with a lot of shedding.

Here are some answers to every question you’ve ever had about the Japanese Spitz, from history to grooming, training, and ideal lifestyle.

Whether you’re curious just for the fun of it or making a decision about whether this dog is right for you, these facts can help.

20 Fun Facts About the Japanese Spitz

The Japanese Spitz has a unique history. They descended from German dogs that came to Japan through Siberia and China in the 1920s.

We aren’t sure exactly what happened after this because records were destroyed in World War II.

The breed appears to have gained popularity not only in Japan but throughout the East and West during this time.

2. The Keeshond Was Instrumental in the Creation of the Japanese Spitz

The Keeshond is a unique Dutch dog that appears to have black spectacles due to the markings on its face.

While white coloration is not common in the breed, a white Keeshond from Canada was an important part of building the Japanese Spitz that we know today.

3. Not Registered With the AKC

While the AKC does have some recognition of the Japanese Spitz, the breed is not currently registered fully with this organization.

Instead, it belongs to a program known as the Foundation Stock Program.

Breeds in this program are purebred dogs that are still developing. The AKC offers reputable avenues for the breed’s records, but foundation stock dogs are not yet officially registered with the AKC.

4. Only Come in White

Some other breeds that are generally light colored, such as the Samoyed, are allowed to come in colors like cream and biscuit.

The Japanese Spitz, however, can only be pure, bright white.

5. Japanese Spitzes Have a Mane

At first glance, the Japanese Spitz may appear to be generally fluffy all over.

However, they grow a distinct mane around their neck and chest, which is thicker and longer than the rest of their hair.

This mane gives the dog a very noble and distinctive appearance as well as making him adorably fluffy.

6. There Are Over 50 Distinct Spitz Breeds

The Japanese Spitz is in good company with over 50 distinct breeds all sharing common characteristics of a Spitz dog.

All of these dogs were developed for cold climates and have lush coats, wedge-shaped faces, pricked ears, and a plume tail.

Japanese Spitzes are born with ears that are folded over. As the dogs get older, the ears become more upright.

Most puppies go through a charming awkward stage as the ears flop just at the tip before they become fully erect. Some dogs may also have a stage when one ear is more upright than the other.

How much does one of these cuties cost? Read this to find out.

Many people see the pure white coat of the Japanese Spitz and assume that it must take daily bathing in order to keep it looking so bright.

In fact, these coats have an amazing ability to repel dirt, seeds, and debris. If your Japanese Spitz gets muddy, you only need to wait for him to dry again to brush out the dirt.

9. Should Not Have Frequent Baths

The sparkling white coat of the Japanese Spitz stays cleaner without frequent baths with water.

Frequent washing can deplete oil, causing the coat to become dry and damaged. Rather than bathing, expect very frequent brushing if you want to keep your Japanese Spitz in optimal condition.

Japanese Spitzes shed profusely year-round. Expect to find flurries of fur everywhere, even if you brush your dog frequently.

Twice a year, Japanese Spitzes blow their coat, which means that they shed their entire undercoat in around three weeks.

At this time, extensive brushing is needed to remove the loose hair. Regardless of how much you brush, expect to find shed hair everywhere throughout your home.

You may assume that because of their small size, Japanese Spitzes don’t need a lot of exercise. In fact, these energetic little dogs are often on the go.

Because of their small size and their willingness to entertain themselves, they are able to get sufficient exercise playing by themselves inside your home.

Many Spitz-type dogs tend to be less trainable than other breeds groups, but this is not the case with the Japanese Spitz.

These intelligent little companion dogs are highly trainable and eager to please.

They are easy to motivate with treats or toys. Many are more than happy to perform just to please their owners.

13. They Never Meet a Stranger

If you’re looking for a guard dog, look elsewhere. The Japanese Spitz is friendly, gregarious, and loves meeting new people.

These outgoing dogs like going to places and having new experiences. They are more than happy to welcome your friends into your home.

In fact, you’ll probably have more trouble keeping your Japanese Spitz from annoying your guests with their constant requests to play than anything else.

14. They Are Healthy Dogs

Japanese Spitzes can live to be 12 to 14 years old. Most are happy and energetic throughout their lives.

Patella luxation has been found within the breed, so be careful to choose a breeder who screens their dogs to be sure that your puppy doesn’t have this painful condition.

Otherwise, you can expect your Japanese Spitz to live a long, healthy life.

15. Don’t Like the Cold as Much as Some Other Spitz Breeds

Most Spitz breeds would sooner lie in the snow than on a rug most of the time, but this is generally not true of the Japanese Spitz.

These dogs can’t tolerate very warm temperatures; they generally prefer about the same temperatures as people do, somewhere around the low to mid 70s.

Because of their ability to entertain themselves inside and their love of being close to their people, Japanese Spitzes tend to make wonderful apartment dogs.

A short walk once or twice a day will suffice for most dogs. Some can even be litter box trained if that is your preference.

Unlike many breeds which were developed for specific purposes and then bred down in size to become companions, the Japanese Spitz has been developed as a companion dog throughout its history.

This means that these dogs are likely to be more eager to please and trainable and less likely to have strong instinctual urges to hunt small prey, dig, etc.

Most Japanese Spitzes enjoy the company of other dogs. They are good natured and rarely pick a fight with housemates or new dogs that they meet.

These dogs typically excel at dog parks and usually get along with other dogs that they meet, even larger ones, provided they are gentle.

You may have to be careful to guide your Japanese Spitz in play, as these playful and outgoing dogs can sometimes get themselves into more than they can handle.

If you’re thinking that your children would probably love to cuddle this adorable teddy bear look alike, you are probably correct, and the Japanese Spitz is unlikely to complain.

At around 10 or 15 pounds, these dogs are sturdy enough to hold up to playing with older children.

Their confident, outgoing nature makes them less likely to be scared by quick movements or the unpredictable behavior of children.

These active, trainable, eager-to-please dogs do a good job of bonding with your child and working to understand their needs.

These are dogs who absolutely love their people, so it really shouldn’t come as too much of a surprise that they hate to be separated from their family.

Many Japanese Spitzes suffer from some level of separation anxiety. It is important to train your dog to tolerate being away from you.

Only choose this breed if you expect to spend significant amounts of your time with them.