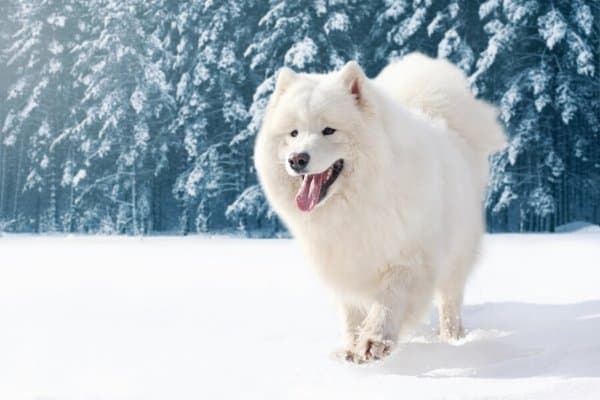 You have probably heard the term “Spitz” in reference to a dog or dog breed, but many people aren’t sure what the term really refers to.

Spitz breeds come in a range of sizes and vary in characteristics, but there are some things that all Spitz breeds have in common.

What are Spitz breed dogs? Spitz dogs are a group of breeds who were developed in northern climates, have a wolf-like appearance, high prey drive, independent nature, and a double coat. They come in a variety of sizes and colors, but are easily recognized as belonging to the Spitz family.

If you have ever wondered what Spitz breed dogs really are or had trouble understanding the similarities and differences between different Spitz breeds, here is everything that you need to know about this intriguing group.

Is Spitz a Breed?

The term “Spitz” is often used to describe the way a dog looks but is Spitz a breed?

The word describes a type of dog developed in a specific climate and having a particular appearance.

The term “Spitz” encompasses a group of dogs with similar features and backgrounds, but “Spitz” is not a breed, just a descriptive term.

A number of breeds compose the Spitz group. Mixed-breed dogs that have the appearance of a Spitz (like Pomskies) are often generally called Spitz dogs too.

As many as 50 or 70 different kinds of Spitz breeds exist.

Spitz breeds come in a number of different shapes and sizes, but all bear a particular resemblance to one another. Here are a few characteristics that are common among all Spitz breeds.

Depending on where you live, Spitz-type dogs may be more or less common.

All of these dogs are better suited to cold climates, so if you live in a warmer part of the country you may be less likely to have these dogs around.

In warmer areas, you are more likely to see smaller Spitz dogs who can get their exercise within an air-conditioned indoor space.

Here are some of the most common Spitz dogs that you can expect to see. 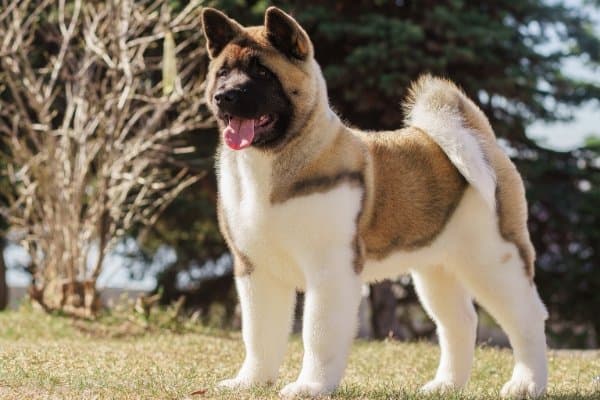 The majestic Akita is among the largest of the Spitz breeds. These Japanese dogs can weigh as much as 130 lbs. They have massive heads that are broader than most Spitz-type dogs.

These dogs tend to be very protective of their family and wary of strangers, so they need careful socialization as they grow up in order to be well socialized with people and other animals. 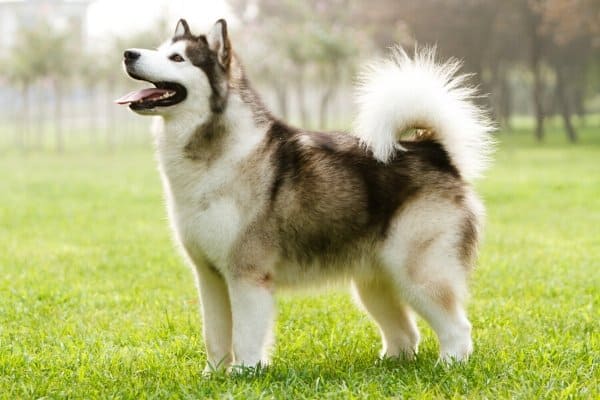 These strong working dogs developed in the Alaskan Tundra. Their primary goal has always been to pull the sleds of their humans.

These are still dogs who need a job to do today. Without work to do, Alaskan Malamutes can easily make pests of themselves. 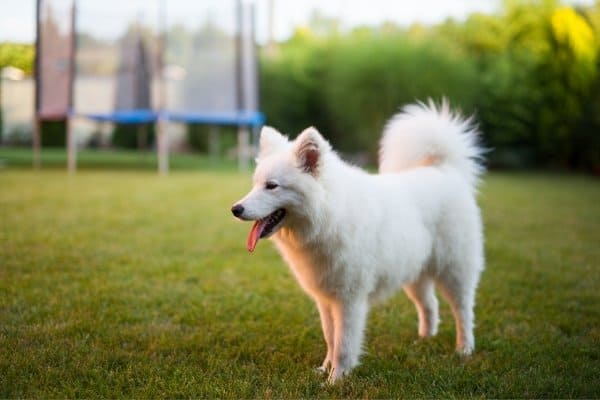 These smaller lap-dog Spitzes are more common in warmer climates than their larger counterparts.

These adorable, little dogs look like tiny polar bears and are popular in households throughout the United States. 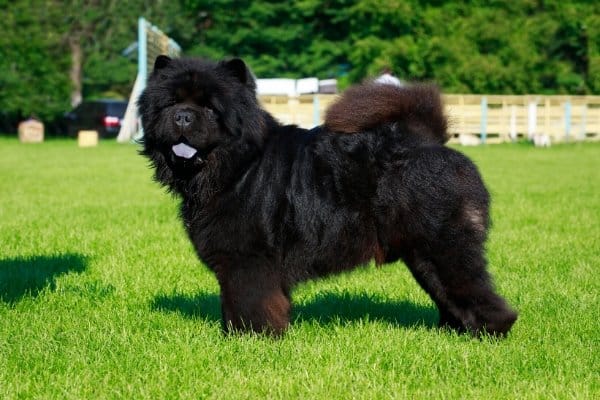 This unique dog has even more fur than the average Spitz. In fact, some dogs almost look like a round poof of fur more than a dog. Chow Chows are also unique because of their black tongue.

While these dogs have upright ears like all Spitzes, the ears almost seem to vanish in their hair, making them look more like bears. 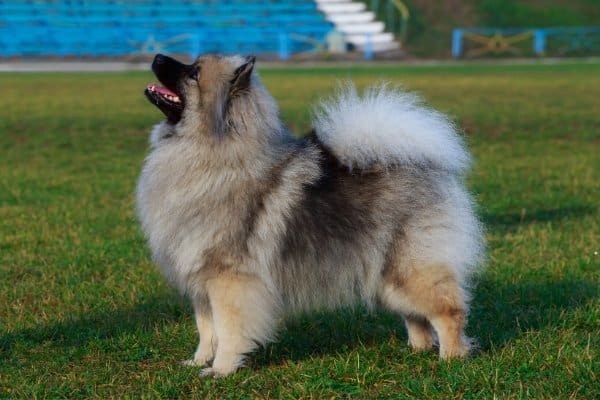 These beautiful Dutch dogs are medium-sized Spitzes. They are not as common as some other members of the group, but are beloved by their fan base.

These dogs have a fox-like appearance. They almost appear to be wearing spectacles due to the markings around their eyes. 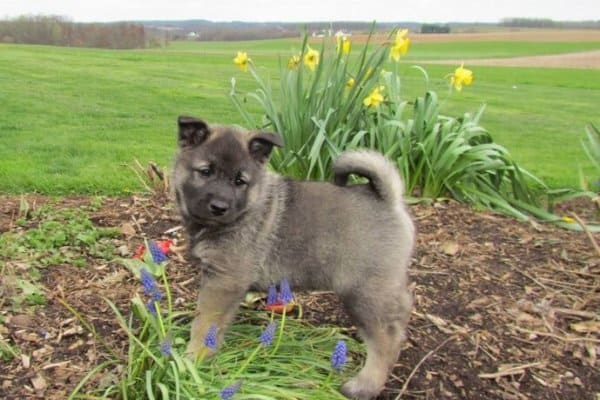 These dogs are lesser-known but nonetheless, very striking. They’re one of the oldest dogs from Europe.

They have a distinct wolf-like appearance. Elkhounds are well known for being excellent watchdogs as well as first-class companions but tend to be sensitive. 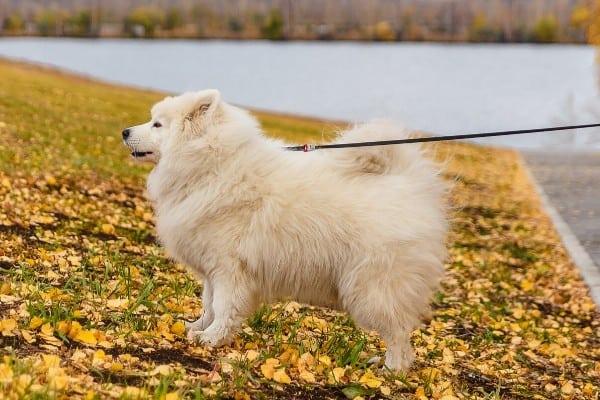 These gorgeous white dogs are best known for their playful smile, distinctive among dog breeds.

Bred to live in the frigid Siberian Arctic, Samoyeds are extremely well suited to cold temperatures and are intolerant of the heat.

The Shiba Inu is one of the most popular dogs in their native Japan. These smaller Spitzes are very much like little foxes.

Distinctive red and white markings are the most common coloration.

Shiba Inus have lush coats that tend to be a bit shorter than some other Spitzes, making them better suited to warmer climates. 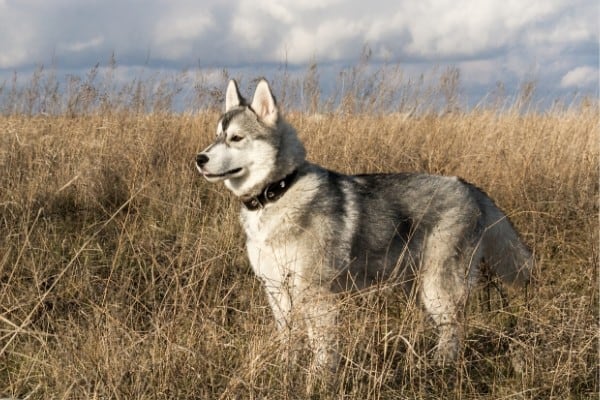 The Siberian Husky is one of the most striking dog breeds. With their beautiful blue or brown eyes and wide range of colors and patterns, these dogs are truly able to turn heads.

They also tend to be a bit on the mischievous side, so be ready for an adventure if you choose this Spitz breed.

Every breed of Spitz dog is unique, and each individual dog has its own personality and characteristics within the breed.

That said, there are some traits that you can expect to find in common among most Spitz-type dogs.

Every Spitz type of dog is marked by erect ears, a curled and plumed tail, and a plush coat. They also have a wolfish shape regardless of size.

Nearly every type of Spitz breed either actively hunted for its human or foraged for their own food by hunting when they weren’t pulling a sled.

Therefore, high prey drive tends to be common among all Spitz breeds. These dogs can rarely be allowed off-leash since they are unable to resist the urge to chase a prey animal if they see one.

Some Spitz breeds are more devoted to their families than others, but for the most part, these are dogs who are more like roommates than they are like devoted pets.

They are much less eager to please than many other types of dogs. Some people find this independence frustrating while others love the distinct personalities that these dogs have.

Spitz-type dogs always have thick, double coats that tend to shed a fair amount. Coats may be longer or shorter and colors vary dramatically.

Some coats are harsher while others are softer. However, Spitz-type dogs will never have a single coat of hair.

Spitz breeds tend to have a few things in common, but they also have a lot of variation among them. These are a few of the things that vary between different Spitz breeds.

The smallest Spitz breeds only weigh around 10 pounds while the largest can weigh as much as 120 pounds.

Spitzes come in pretty much every size variation in between, so if you have your heart set on a Spitz, the chances are good that you’ll find one that is an appropriate size for your needs.

Some Spitz breeds are known for being highly gregarious towards strangers and make terrible watchdogs.

Other Spitz breeds are famous for their loyalty and bravery and are extremely wary and reserved with strangers.

Carefully research your breed, because friendliness varies dramatically even when other characteristics, like size, may be the same.

All Spitzes have similar types of coat, but the color changes dramatically.

From the Samoyed and Eskimo dog that nearly always come in white to the many colors and markings of a Malamute or Husky, Spitzes run the gamut of dog colors.