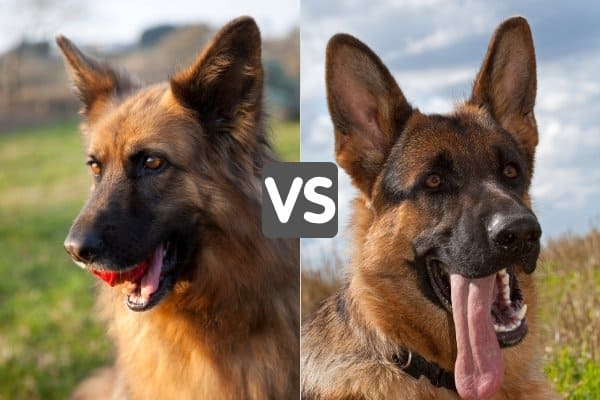 You are probably at least somewhat familiar with the German Shepherd Dog, a breed who has been made famous across the world due to service in the military and police force and notable Hollywood roles such as Rin Tin Tin.

However, the Shiloh Shepherd is a much lesser-known breed.

What are the differences between these two breeds anyhow, and how can you decide which is best for your family?

If you are debating between these two breeds, there are some important differences to consider.

Here’s what you need to know when deciding between the Shiloh Shepherd and the German Shepherd.

The American Kennel Club (AKC) does not recognize the Shiloh Shepherd as a breed.

This dog has been in development since the 1970s, and while quite consistent to the standard, the new breed has not yet met the rigorous requirements of the AKC to achieve breed recognition.

Shiloh Shepherds were developed using German Shepherds and other breeds, like the Malamute, so it may be many years before these dogs are consistent enough for the AKC to acknowledge them.

Therefore, if you are considering a Shiloh Shepherd, keep in mind that you will not be able to register your dog with the AKC or compete in AKC shows or purebred training events.

Keep in mind that while well-bred Shiloh Shepherds are likely to have ideal characteristics, Shilohs are not going to be as consistent as purebred dogs since their characteristics and genes are not as well established.

An individual puppy may show more Malamute or other breed characteristics or he may seem more like a purebred German Shepherd.

The German Shepherd Dog, on the other hand, is descended from German herding dogs who were already in development in the late 1800s.

One breeder, a German Cavalry officer named Captain Max von Stephanitz, made it his mission to produce a superb herding breed and created the German Shepherd as we know it today.

The breed quickly spread across the world and became a popular working dog worldwide.

Shiloh Shepherds weigh between 80 and 130 pounds, depending on gender.

Male Shiloh Shepherds stay between 28 and 32 inches at the shoulder while females will be between 26 and 30 inches tall.

This sets the Shiloh Shepherd a head taller than the German Shepherd and means that they are considerably heavier.

German Shepherds are big dogs, but they are a little bit smaller than Shiloh Shepherds.

Male German Shepherds stand between 24 and 26 inches at the shoulder and weigh between 65 and 90 pounds while females are 22 to 24 inches tall and weigh 50 to 70 pounds.

Shiloh Shepherds come in either smooth or plush coat types.

In either type of coat, the hair should be shorter on the sides of the body, face, the forelegs, and the feet but longer on the shoulders and neck, down the back, and on the underside of the tail.

Smooth-coated Shiloh Shepherds should have a thick, double coat with the outer coat lying close to the body and slightly longer hair on the forelegs and hind legs.

Plush-coated Shiloh Shepherds may not have as coarse of a coat as the smooth-coated varieties.

They should have a distinctly longer mane and chest hair and more pronounced feathering on the head and the back of the legs and tail.

Shiloh Shepherds can have a small white patch on the chest but should have no other markings other than the distinct black saddle on the back.

The German Shepherd comes in various coat types, but the most common and AKC recognized is a medium-length double coat.

The coat tends to be very dense, and the outer coat lies flat for a sleek appearance.

It is common for the hair on the hind legs and the back of the forelegs to be a little bit longer and for the neck to have longer and thicker hair as well.

German Shepherds can come in a range of colors and most colors are allowed by the AKC standard.

If there are markings present, they should be the black saddle with lighter contrasting hair.

Any pale or washed-out colors are considered inappropriate.

Blues and livers are also not allowed, and white dogs are not permitted by AKC standards.

Shiloh Shepherds have been bred to be less aggressive and more mellow than German Shepherds.

They tend to be friendlier with strangers and make excellent therapy dogs for this reason.

Their good-natured personality and empathy extend to everyone they meet.

While they may bark when a stranger approaches and some may show aggression in certain situations, in general, a Shiloh Shepherd will back down from conflict much more readily than a German Shepherd.

That said, this breed should still be brave enough to protect their family if the need arises.

These dogs tend to be very adaptive to their surroundings and are extremely inquisitive.

They should be self-assured, and while submissive, they should not appear fearful or anxious.

The German Shepherd is known to have a direct and fearless personality.

While they are not generally unfriendly towards new people, they don’t make friends easily.

German Shepherds are not afraid to courageously defend their home and family as timidness is not characteristic of the breed.

While sensitive, they are not considered a nervous breed.

It is typical of them to ignore strangers and it’s normal for them to be indifferent to extravagant efforts to win their attention and affection.

It is very normal for a German Shepherd to display aggression if a stranger threatens their home or family, and with training, these are excellent protection and attack dogs.

Shiloh Shepherds, on average, have considerably less energy and drive than the typical German Shepherd.

They’re still relatively high-energy dogs, and many will need more than a quick walk to wear down their energy every day, but they’re not the non-stop powerhouses that German Shepherds are.

Their energy levels are better suited to an active family than an engaging, demanding job.

German Shepherds are eager working dogs who need to have a job to do in order to be satisfied.

They can be challenging to handle when they are excited and need extensive training with a firm hand in order to be able to resist impulses.

The instinct to herd is quite strong in many German Shepherds and may result in a high prey drive or an attempt to herd household pets or even perhaps children.

Which is a better family dog, the German Shepherd or the Shiloh Shepherd?

You can expect Shilohs to have less aggression with visitors and more empathy with your family than the German Shepherd.

Which is a healthier breed?

Shiloh Shepherds were bred to eliminate some problems that are common in German Shepherds, such as hip and elbow dysplasia.

That said, the Shiloh is a large breed, and larger dogs often suffer from various health problems.

You may expect fewer hip and joint problems with the Shiloh Shepherd, but you must still be careful of bloat and other large dog concerns.