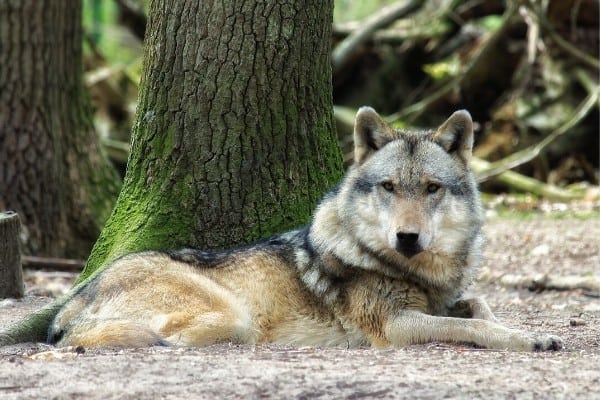 Have you ever wondered what it would be like to actually live with a wolf dog or how one typically behaves on a day-to-day basis?

Wolf dogs are absolutely unique, being neither pure dog nor pure wolf.

Their behavior and temperament can vary a great deal, but there are some things that every wolf dog owner should anticipate.

How do wolf dogs behave? Though some wolf dogs may become friendly and people oriented, many will be shy, timid, and distrusting of humans. Many don’t respond well to training or socialization and may be aggressive if they feel their sense of security is threatened in any way.

Many hopeful owners of wolf hybrids soon find themselves overwhelmed and ill equipped to handle their new pet.

As heartbreaking as it may be for the owners, the situation is usually much worse for the wolf dog who can’t seem to adjust to the environment in which he finds himself.

It is imperative that people understand that a canine with 50% wolf DNA will not behave like an ordinary dog because, simply, he is so much more than that.

With wolf blood circulating in their veins, it’s unrealistic to expect wolf dogs to behave identically to dog breeds that have been carefully bred for years for desirable temperament traits.

The following behaviors come naturally to these hybrid animals who often act on instinct rather than seeking your permission or approval.

It is perfectly normal for a wolf dog to instinctively guard their resources and property.

In their minds, possessions can include food, toys, stolen items (thievery seems to be a favorite activity), and even their territory and human family.

An attempt to take away a wolf dog’s possessions may result in a show of aggression or even a bite.

Sometimes you can distract a wolf dog away from something that he has stolen or values highly if you have a very desirable treat available, but do not allow the them to see you take it away, or they may turn aggressive.

They seem to adhere to the rationale, “Once mine, always mine, and I will defend my possessions.”

Wolf dogs are extremely intelligent. Too often, they utilize their intelligence in ways that are highly undesirable, such as escaping.

Wolf dogs need very tall, secure fences. Either a roofed enclosure or fencing that bends inward at the top is necessary to prevent these very capable climbers from scaling a fence.

These accomplished diggers can tunnel out as well unless buried concrete barriers are placed around the perimeter of their enclosure.

Believe it or not, wolf dogs locked in rooms have been known to chew through a wall to get out.

You must be fully prepared for repeated escape attempts, some of which your wolf dog may be able to achieve incredibly quickly.

It is normal for wolf dogs to have extremely high prey drive.

They tend to perceive all smaller animals as potential prey and may be triggered to chase and even attack anything that is running away from them.

In the wild, wolves sometimes attack even large game.

Your wolf dog may inherit the instinct to hunt large game from his wolf ancestry along with the a bold, fearless confidence, resulting in an animal who won’t hesitate to attack livestock.

You must always keep prey drive in mind when you are working with your wolf dog.

They should never be allowed off leash or loose in an area that has any type of animal that they may hurt.

One of the things that most of us imagine when we think about getting any kind of new pet is the positive interactions that we will have.

When you imagine a dog, you probably think about them staring into your eyes lovingly or relaxed at your feet.

Granted, wolf dogs do sometimes have great relationships with people. They can be playful, affectionate, and endearing.

However, wolf dogs are often independent and do not rely on people for affirmation, love, or comfort.

They have not evolved to follow human commands like dogs have and may not even understand basic gestures, such as pointing, that we take for granted with dogs.

Unlike dogs, who live in a loose social structure, readily accept human leadership, and don’t often actively seek dominance, it’s normal for wolves to engage in assertive, dominant behaviors as they near adulthood.

Your wolf dog may suddenly show aggression or other dominant behavior towards other animals or even towards family members.

Any training that your wolf dog does have may seem to vanish when your dog reaches sexual maturity.

Marking behaviors typically appear in conjunction with sexual maturity and can be extremely difficult to curb once they begin.

Like dogs, most wolf dogs love to play, but their definition of a good time may be quite different from what you’re used to seeing in dogs.

For instance, it can be much harder to teach a wolf dog to bring back a toy when you play games of fetch, because trust and sharing do not come easily to this hybrid.

The problem is further compounded because intentionally taking a toy away from your wolf dog may spark aggressive behavior.

That said, if your wolf dog will willingly drop a toy for you to throw repeatedly or will take another toy in exchange, that is a great way to play.

Most wolf dogs love to run, so running for long distances with your dog is a good way to burn off some of that nonstop energy so that your wolf dog can relax at the end of the day.

What Is it Like to Live With a Wolf Dog?

Every wolf dog is different as each one inherits a different combination of traits from the parents.

Because one parent is a domestic animal and the other is very much a wild creature, you never really know what to expect from a wolf dog until you get to know them very well.

Some will behave similarly to domestic dogs and will be friendly, trainable, and affectionate.

Others may behave very much like their wolf parents and never lose their instinctive fear and distrust of people, remaining timid and rather feral throughout their lives.

Furthermore, behavior often changes dramatically once wolf dogs reach sexual maturity, so you can expect to have new issues to deal with as your pet matures.

Case in point: Patricia McConnell, PhD, an animal behaviorist was once called upon for help with a 4-month-old wolf dog.

The young dog’s owners had called the trainer in desperation, after failing to manage the wolf dog in an upstairs apartment.

After witnessing the destruction caused after only a few moments, including urinating at will inside the apartment, Dr. McConnell described the pup as being “virtually unstoppable.”

Eventually, the owners realized that they could not handle their pet anymore but soon learned that placing the canine in a new home proved to be virtually impossible.

You can probably guess that this situation did not end well.

Reasons Why Living With a Wolf Dog Can Be Difficult

Life with a wolf dog presents certain challenges not encountered with your average domestic dog.

Remember that half of their genetic makeup is from a wild animal who has not been bred for years to live in companionship and harmony with people.

Wolf Dogs are Big and Energetic

Many wolf dogs seem to be in constant motion. If you think that a Husky is active, you will be astounded by the continuous activity of a wolf dog.

This combination can lead to your home becoming a disaster zone if your pet is not provided with appropriate channels for all that energy.

Furthermore, relaxing and lounging around for hours on end are not high on their list of priorities.

Unlike a dog, who can learn to settle down with a favorite chew toy or relax with you on the couch, wolf dogs tend to be into everything, all of the time.

They are also extremely intelligent, which means that they become easily bored and will look for ways to entertain themselves.

They Are Not Very Responsive

Unlike dogs who have been bred for thousands of years to be responsive to humans, wolf dogs often act more like their wolf ancestors, avoiding eye contact and being unwilling to respond to humans at all.

Studies have found that wolves are less able to establish eye contact and “react to a lesser degree to intensive socialization in contrast to dogs.”

This means that working with a wolf dog can be very challenging.

How Can You Train a Wolf Dog?

Wolf dogs are highly intelligent and they will have no trouble understanding a task, but it may not be in their nature to intentionally seek to please you.

Motivating them to perform a requested action can also be very difficult. In fact, training a wolf dog can be more like training a cat.

You can shape behaviors occasionally, but you really can’t expect them to obey your every whim or learn not to jump on the kitchen counters.

Be aware that any disciplinary actions or harsh corrections can quickly and permanently lead to a bad relationship between the two of you.

Therefore, training should be kept to brief and fun exercises with lots of positive reinforcements. Teach yourself not to expect your wolf dog to behave perfectly in a home environment.

Instead, make sure that your wolf dog has a large, secure enclosure in which to burn off some steam.

What can I do to deal with my wolf dog’s behavior problems?

Traditional training is not an effective option for many wolf dogs.

Instead, the best way to manage behavior problems is by giving your wolf dog room to act out natural behavior in a space where he won’t hurt anything.

This is why a strong, inescapable, large closure is so important if you are going to consider owning a wolf dog.

Will my wolf dog love me?

Most people who form relationships with wolf dogs claim that their animals express affection and seem loving towards them.

You cannot expect the kind of utter devotion that dogs typically show towards their owners, but you can expect your wolf dog to enjoy your presence, seek out attention, and show a preference for you over other people.

Just expect that this show of love will come on the wolf dog’s terms, and do not expect them to obey you unless it happens to fit their agenda.