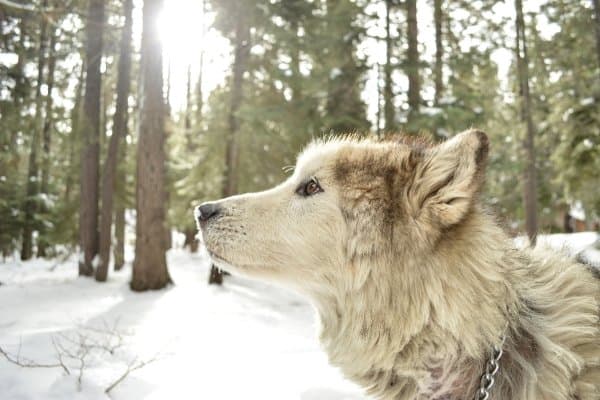 Low-content wolf dogs may be a better option for those with their heart set on owning a wolf-dog mix as they may be better suited to living a domestic life than their high-content counterparts.

However, even a low-content wolf dog is like a wild animal in many ways, and owning one is not the same as caring for a standard dog.

What is a low-content wolf dog? A low-content wolf dog is any wolf-dog hybrid which contains less than 50% pure wolf. Genetically, they are more domestic dog than wolf, though evidence of their wolf ancestry will likely be apparent in their temperament, behaviors, and independence.

Low-content wolf dogs tend to have specific traits and differ significantly from other types of wolf-dog hybrids.

Educating yourself on all aspects of life with a wolf dog can be invaluable if you are considering owning one and can spare you disappointment in the future by allowing you to form realistic expectations.

First of all, what is a low-content wolf dog exactly? A wolf dog, simply put, is part wolf and part domestic dog. Sometimes a wolf dog results from the direct pairing of a wolf to a dog.

However, a wolf dog can be bred to another wolf dog or bred back to either a pure wolf or pure domestic dog, and the puppies would still be considered wolf dogs because they contain pure wolf blood in their recent history.

This is where the content classification comes into play. Wolf dogs with pure wolf percentages of less than 50% are considered to be low-content dogs.

Those with percentages ranging from 51 to 75% are called mid-content hybrids, and anything higher than that is referred to as high content.

Low-content wolf dogs are technically, at the biological level, more dog than wolf, so their appearance often tends to be more like a dog in many ways.

However, occasionally a low-content wolf dog has an unusually strong wolf-like appearance. It really depends on how the genes interplay and are expressed in each individual.

Low-content wolf dogs with a wolf-like appearance and a dog-like personality are some of the most sought-after wolf dogs as they can sometimes do well in family homes while still looking remarkably like wolves.

Low-content wolf dogs may have finer guard hairs, and the individual hairs might not show as much color variation as wolf dogs with a higher content of wolf.

In some cases, the coloration may show distinct markings such as the black saddle of a German Shepherd, which gives a clue as to the type of dog used in breeding.

A thick undercoat is to be expected.

Wolves have much longer snouts than dogs. This is one of the first differences noted when comparing low-content wolf dogs to high-content animals.

Low-content wolf dogs rarely have the distinctive, long snout of a wolf.

Wolves are known for their piercing light-colored, often amber eyes. Low-content wolf dogs are much less likely to inherit these stunning eyes and more likely to have dark brown or blue eyes like a domestic dog.

This may or may not be the case, but it certainly doesn’t mean that most low-content wolf dogs are easily managed in a home environment.

Just as a low content wolf dog may inherit a very wolf-like appearance, they may also end up inheriting wolf-like tendencies in behavior even if they are mostly dog.

Low-content wolf dogs tend to be independent, like all wolf dogs, but they may be more likely to enjoy human contact than wolf dogs with a higher wolf content.

It takes most wolf dogs, regardless of content levels, considerable time to trust and interact with a new person, regardless of their socialization previously. It’s just a part of who they are.

The best way to teach your low-content wolf dog to enjoy seeking out your attention is to have tasty treats available and offer them frequently.

It also helps to respect your dog’s space and only offer attention when your dog actively seeks it.

Low-content wolf dogs are more likely to want to share space and affection with you than higher content wolf dogs, but their wolfish ways of communicating sometimes result in nipping or a “love bite.”

You may also find that a wolf dog has a strange desire to lick your teeth or the inside of your mouth.

While this is sometimes an indication of hunger, this behavior is also used to demonstrate affection. Just don’t feel as though you have to return the gesture.

Delicious, highly valued treats are often great for motivation, though some can be trained using toys and/or affection.

The trick is to always have motivators on hand and be sure to only ask for behaviors that your dog won’t mind doing, especially at the beginning

Living With a Low-Content Wolf Dog

Owners will still need to make certain adjustments to their lives and should not expect their new pet to behave exactly as an ordinary dog would.

One of the most common misconceptions about low-content wolf dogs is that they do not need special enclosures.

While some low-content wolf dogs may learn to live in your home quite well, others never master the skills of staying off of the furniture or not chewing on everything in sight.

The last thing that you want is to be stuck with a dog that you can’t control and have nowhere safe to keep him.

Therefore, even if you don’t expect to use it most of the time, it is important to have a specially made, escape-proof enclosure with dig-proof barriers and sturdy fencing that bends inward available.

All wolf dogs are more difficult to potty train than domestic dogs, but low-content wolf dogs may be easier to teach than higher content animals.

Some wolf dogs will have a harder time with housebreaking than others.

Keep in mind that once wolf dogs reach sexual maturity, they may have an instinct to urinate near resources like food or on their favorite couch.

In these instances, the problem is due to hormonal changes, and while spaying or neutering may help, this issue can be very difficult to curtail.

Are Low-Content Wolf Dogs Safe With Other Dogs?

Most low-content wolf dogs love the company of other dogs. After all, dogs and wolves are both naturally social.

That said, the tendency to seek out dominance can make wolf dogs reactive to even other dogs that they have played well with for years.

Furthermore, because low-content wolf dogs tend to have a very high prey drive, they may see smaller dogs as prey.

Can Low-Content Wolf Dogs Live in a City?

For the vast majority of wolf dogs, including low-content wolf dogs, city living is not desirable and may even prove to be impossible.

These dogs are often scared by the constantly changing sounds and sights of city life.

They will not enjoy having to be constantly on a leash when outdoors, and dog parks are generally out of the question, so providing sufficient exercise can be very challenging.

What if You Need to Rehome your Low-Content Wolf Dog?

If you find that you can’t take care of your low-content wolf dog, you may have a difficult situation on your hands.

Wolf dogs who are brought to shelters are often euthanized without ever being put up for adoption unless a rescue group can take possession of them.

Most wolf dog rescues are completely overwhelmed by the animals already in their care and are unlikely to agree to take your wolf dog.

Wolf sanctuaries may be an option; however, these too are usually at capacity.

Since very few people are equipped to deal with a challenging wolf hybrid, rehoming a wolf dog to an individual may be next to impossible.

Think long and hard about whether you can commit to a wolf dog for its entire life (up to 14 years) before you get a puppy.

Many wolf dogs that are purchased as puppies end up being euthanized at a young age when their owners fail to care for them.

If you adopt a low-content wolf dog from a wolf dog rescue, talk to them about what would happen if you could no longer care for the dog.

When Can You Get a Low-Content Wolf dog?