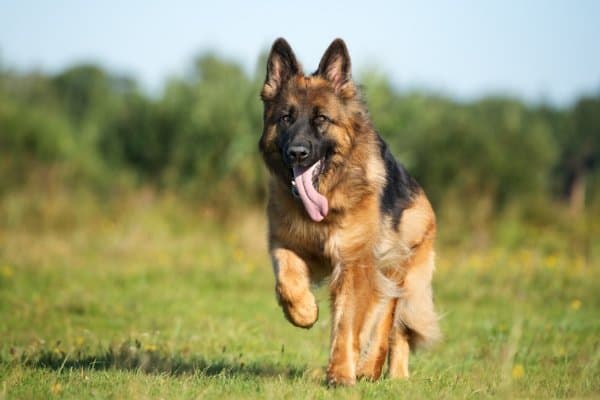 The Shiloh Shepherd is a huge, beautiful dog that has been developed from the German Shepherd but is a separate breed that is not yet recognized by the American Kennel Club or other major kennel clubs.

These dogs are known for being sweet-tempered and utterly devoted to their family.

What is a Shiloh Shepherd? Shiloh Shepherds are big, even-tempered, empathetic relatives of the German Shepherd. They have a magnificent, intimidating bearing but are unlikely to show aggression. These gentle giants excel in therapy and service work and are perfect family dogs.

If you’re wondering what the Shiloh Shepherd is and whether it’s a good fit for your family, here is what you need to know.

Shiloh Shepherds were developed in the mid-1970s.

She found that many German Shepherds were too much dog for the average family.

She was also concerned by the prevalence of health problems like hip dysplasia in many German Shepherd lines.

Her goal was to breed a dog who was mellow enough to be handled by a small child and excelled in a family setting.

She wanted a dog with an intimidating appearance and bark who wasn’t actually a danger to anybody.

She also wanted a dog that looked more like the German Shepherds that she remembered when she was a child in Germany.

Her goal was a big, healthy, dependable dog who would be an excellent fit for families. She separated from the AKC and began breeding a separate breed, known as the Shiloh Shepherd.

What Are Shiloh Shepherds Bred For?

The Shiloh Shepherd was bred to be large, intelligent, and even-tempered.

Aggression was bred out of this breed so they are no longer suitable for protection or bite work like their primary ancestor, the German Shepherd.

They retain some natural protectiveness and can have a fierce bark, but for the most part this bread doesn’t have the aggression or bravery with which to back up their bark.

Instead of aggressiveness and strong protection drive, this dog was bred to be empathetic and thoughtful. For this reason, they excel in all kinds of service dog work and therapy roles.

The increased size also makes these dogs an excellent fit for service work, since they are strong and stable enough for work that requires their handlers to lean on them.

These dogs can do very well in all sorts of dog sports like agility, rally, dock diving, and tracking, but at heart, they are family dogs who are happiest just spending time with their people.

They tend to be sociable dogs who get along with everybody and do very well with other animals.

While some individuals may have the strong herding or prey drive that is typical to a herding breed like a German Shepherd, most individuals do not experience drives strongly.

How Big Do Shiloh Shepherds Get?

One of the key distinguishing factors that separates the Shiloh Shepherd from the German Shepherd is size.

Shiloh Shepherds were created by breeding particular German Shepherds who most closely matched the breed founder’s standards with other breeds, such as the Malamute, in order to increase the size.

Most Shiloh Shepherds weigh between 80 and 130 lb, with males tending to be a bit larger than females.

Weight should be proportional to their height, but most will average about 100 pounds.

Any dog that doesn’t reach the minimum height requirement by the time they are 36 months of age will not meet breed standards.

What Colors Can They Come In?

In general, you can expect to find Shiloh Shepherds in the same shades as German Shepherds.

Dogs with a dual-colored coat should have a distinctive black saddle or blanket marking over their back and shoulders like the markings of a German Shepherd.

You may also find silver, beige, and cream. Dogs may also be solid colors of gold, red, dark gray, or dark brown.

Sable is also a completely acceptable color and quite beautiful in Shiloh Shepherds, with guard hairs tinted black and a light undercoat that is usually either fawn or gray.

It is also acceptable to find Shiloh Shepherds in pure black or white.

The Shiloh Shepherd should have lips, nose, eye rims, pads, and toenails that are black. They may also have lighter or darker facial masks and eye patches.

It is acceptable to have a small patch of white on the chest and some white hairs on the toes, but any white markings larger than a person’s palm are not acceptable.

All colors should be richly pigmented, so washed-out or dull colors are not permissible. Blue and liver are also not acceptable.

There are plenty of good things to say about Shiloh Shepherds.

It is clear that the decision to divert this breed from the German Shepherd has resulted in some distinct differences that are preferable for some people.

Here are some good things to know about the Shiloh Shepherd.

Shiloh Shepherds are one of the few breeds today who is primarily bred for temperament.

Instead of being bred to do a specific job like herding or hunting, Shiloh Shepherds have been bred to do nothing more than to get along well with your family.

Unlike most of our companion dogs which have been bred to do specific jobs, such as the German Shepherd Dog or Belgian Malinois, the Shiloh Shepherd has been bred, first and foremost, to be a good family pet.

As such, if you want a dog with a lot of intelligence and an intimidating appearance but you don’t want to have to worry about a dog having an inappropriate drive to protect, the Shiloh Shepherd is a great choice.

These are absolutely majestic dogs. They come in a massive size with lush, gorgeous coats of rich color.

You can choose between a short or a long coat, but regardless of the coat type, you can expect a gorgeous, plush coat with lovely coloration.

Paired with the regal bearing and upright ears, you can be certain that this is a dog who will impress.

Shiloh Shepherds were bred to be devoted and empathetic. These traits are true of the breed when they interact with their family but also can be found in their interactions with new people.

This makes them superb therapy dogs as well as being great service dogs.

Keep in mind that dogs that are so devoted and love people so much may not do well when left alone.

Part of the reason that the Shiloh Shepherd was developed was to eliminate problems such as hip dysplasia so frequently found in purebred German Shepherds.

While this goal has not yet been entirely accomplished and it’s entirely possible to find hip and elbow dysplasia in Shiloh Shepherds, generally, this breed is healthier than most German Shepherds and many other large breeds.

With all the wonderful things about Shiloh Shepherds, you may be wondering what there is to lose in choosing this breed.

Like all breeds, there are some downsides to these gentle dogs as well.

Shiloh Shepherds shed. A lot. Whether you choose the long or short-coated variety, expect to spend a fair amount of time brushing and cleaning up after this dog.

Integration of breeds like the Malamute means that this breed may shed even more than a standard German Shepherd.

The lush coat of this breed means they aren’t a great choice for warm climates.

Short-coated dogs will certainly do better in hot weather than long-coated dogs, but both varieties have a lush, double coat that may make them uncomfortable in very hot temperatures.

They Can Be Needy

If you want a dog who is as devoted to you as is the Shiloh Shepherd, be prepared to meet their needs to be with you as well.

This is not a dog who can tolerate being left alone for long periods, and many may experience separation anxiety.