Having a dog in your life is an amazing experience.  They will bring you happiness, affection, and companionship. Our side of the bargain is to make sure we care for them, protect them and prepare them for the experiences they’ll have in the world. Socialization is a huge part of that!

How will your pup react to new people? New animals? New sounds and places? It’s our job to make sure they can interact with the world confidently. Socializing your dog means giving them the experiences to foster confidence and security. By exposing them to new things in a controlled way that they can handle, you’ll give them the foundation they need in life.

A well-socialized dog will react well to new sights, sounds, people and animals. You’re helping them live a happy and full life in the world around them!

In this guide, we’ll share with you common situations you and your pup will encounter and how to introduce them to your dog. By reading through this, you’re taking a huge step in being a loving and responsible caretaker for your pup.

Socialization is the process of helping your dog become acclimated and comfortable around new and strange surroundings. It involves getting them used to strange smells, sounds, and sights as well as doing new things, such as riding in a car, watching a parade or playing in the park in a positive way. Socialization is important because it plays a major role in the overall health and wellness of your dog. An improperly socialized dog can pose a risk to himself and others around him. The socialization the dog gets at a young age plays a big part in what type of dog he is as an adult.

Not socializing your dog can have almost as many negative effects as socializing will have positive effects. Failure to properly socialize a dog can result in the dog being afraid of almost anything new and unfamiliar to him. Even the flapping of a window-blown curtain can send the un-socialized dog into a frenzy, and a frightened dog can easily become aggressive because he’s frightened. A dog that’s not socialized is going to be anxious and nervous about some of the most common situations (being groomed, listening to thunder or even getting into a car).

Although socializing a dog generally involves taking the dog to new and unfamiliar surroundings and introducing him to new and unfamiliar people, places and things, it actually goes much deeper than that. You’ll want to give your dog various types of socialization at as early of an age as possible. Simple socialization can begin when the pup is as young as a couple of weeks of age.

Socialization period and timeline – A puppy’s most effective socialization period is between 4 weeks and 16 weeks. During this time, they’re curious and want to experience as must about life as they can. They also have not yet developed deep-rooted fears that can be hard to overcome. Socializing your puppy isn’t just about introducing him to new people, places and things. It’s also about monitoring how he reacts to these things and if he’s reacting in a positive manner.

Importance of starting young – When puppies are young, they’re still more inquisitive than they are fearful, and it’s easy to introduce them to new things. The younger they are, the easier it is to get them accustomed to new people and new things. Let’s not forget their weight. A small puppy is going to be a lot easier to handle on or off leash than an older dog.

What has the breeder done already – If you got your puppy from a reputable, responsible breeder, your puppy has probably begun his socialization period already. Breeders usually begin handling the puppies when they’re only one or two weeks old. Even if their eyes aren’t open, they can still hear sounds and feel different touches. Handling puppies at a young age is usually what makes them calmer as adult dogs.

Fear stages and the importance of caution – Your puppy will display certain mannerisms to express his emotions. Pay attention to what he’s telling you. Never try to force your puppy to “get over it and accept it”. Give him time to become comfortable at his own pace. If you try to force the issue when the dog is afraid, you’re almost reinforcing the fear and letting the dog know it’s ok to behave that way. If, for instance, your puppy is acting afraid of a child, ask the child to just sit or stand there. There is a good chance the puppy will become curious and walk to the child on his own. Let it be the dog’s decision. Forcing a fearful dog to do something he’s afraid to do can cause unnecessary aggression and even more fear.

Bring other pups into your home – It’s never too early to begin socializing your puppy with other puppies and dogs. Vets don’t recommend taking them out and around other dogs until they’ve received all their vaccinations, but this is not to say others can’t bring their puppies to your home. Short simple visits work best at first – enough to introduce them and allow for a little playtime. 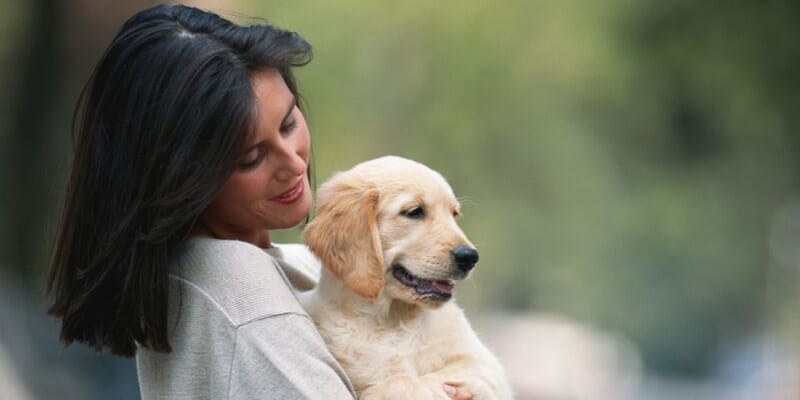 Never too late even if they’re older – Socializing an older dog is going to be more challenging – no doubt about it. However, it is possible. Avoid taking him to dog parks in the beginning. You can take him there, but keep him on the outside just observing. You may want to use a muzzle the first couple of times if he appears to be showing signs of aggression. It may make you and others feel more comfortable. Take him for walks to allow him to see as much of the world around him as possible and to wear off excess energy. Introduce him to only one dog or person at a time to gauge his reaction. If he does act nervous or upset, try to ignore the behavior and keep moving. Calling his attention to negative behavior will only encourage it further. Feeding him treats may help relax him a bit.

AKC Canine Good Citizen Training/Test – This program is a great way to begin the training process for your dog and can act as a foundation for any further training you may want your dog to have. You can join and participate in an AKC Canine Good Citizen training group or train the dog on your own. If you train your dog, you’ll have to bring him to an authorized AKC evaluator and tester. To earn the award, the dog must pass ten tests.

Tips for Safe and Successful Socialization With Other Puppies and Dogs

Many new dog owners underestimate the importance of proper and adequate socialization until they are forced to take their dog outside of its home. They’re often surprised and annoyed at the dog’s behavior. A common statement is often, “I don’t know what’s wrong. He’s never acted this way.” The dog never acted that way because he was never forced in that situation. Socialization is not just important for your dog. It’s almost as important for your dog’s overall health as food and water.

We’ve put together an 80+ Point Socialization Checklist to help guide you through the process. In it, you’ll get ideas on experiences and situations to expose your puppy or dog to so they’re better prepared for their life ahead. Take a look below or download it here.