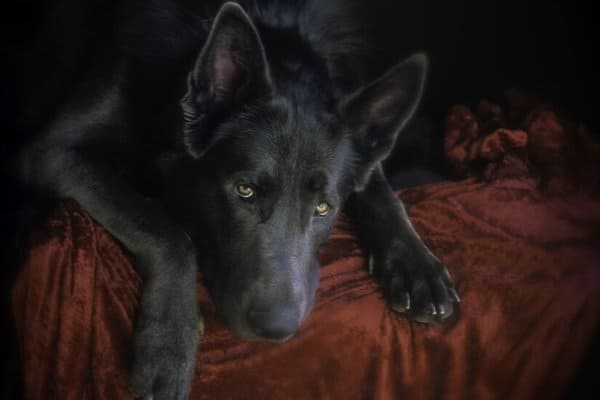 Blue Bay Shepherds are relatively new to the dog world and are still in the developmental phase.

Those lucky folks who have the pleasure of meeting and interacting with these beautiful dogs find themselves instantly hooked and intrigued.

How big are Blue Bay Shepherds? A Blue Bay Shepherd will typically be close to 30 inches tall at the shoulder and weigh between 70 and 100 pounds on average, with males usually being taller and heavier. Because this breed is still being developed, variations in size can be expected.

Considering the future size of an adorable little puppy is something many potential owners fail to do.

Too often, owners find themselves with a dog that has all too quickly become bigger than they anticipated, and space is suddenly a major issue.

Let’s take a look at how large you can expect these gentle, energetic dogs to become and key factors to consider before you decide to bring one home.

How Big Do Blue Bay Shepherds Get?

Due to the fact that Blue Bay Shepherds are still a work in progress, some variations in size can be expected for quite a few more years, but there is no doubt that these dogs will be large when fully grown.

Keep in mind that the following size range stated for both sexes is merely an approximation, and it is perfectly normal for dogs to fall below or exceed the average size at this stage of a new breed’s development.

As Blue Bays become more standardized, a breed club is formed, and the dogs breed true for several generations, the average size may change slightly before becoming consistent in the breed.

Most male Blue Bay Shepherds will be somewhere between 85 and 105 pounds. Of course, some may be slightly lighter, and others may be well over 100 pounds.

In fact, there have been several who reached a whopping 130 pounds.

Many males will be around 30 inches tall at the uppermost point of the shoulder (the withers), though measurements below this are fairly common.

The owner of Kurgan, a Blue Bay with a rather large YouTube following, says that at 1 year old, Kurgan weighed more than 100 pounds and stood about 33 inches tall, and this dog wasn’t even finished growing yet!

To give you an even better idea of how big that actually is, consider this: When Kurgan stands upright on two feet, he is nearly as tall as his 6-foot tall owner. That is one big boy.

Female Blue Bay Shepherds can generally be expected to be a bit smaller than males. This is true of most dog breeds.

On average, a female will weigh between 70 and 85 pounds, but as with males, these numbers aren’t set in stone.

Some may never quite reach 70 pounds, and others may be closer to 100 pounds or even more.

Generally, females will be under 30 inches tall at the withers.

Jazz, a female Blue Bay out of Dillon and Passion (an original foundation breeding pair to first produce a litter of Blue Bay Shepherds), only stands at 26 inches tall.

A Blue Bay Shepherd’s size is most dependent on the size of the parents, though dogs farther back in the bloodline can influence size as well.

A total of eight breeds was used in the development of Blue Bays, and so, depending on how far back a particular breed was added, a Blue Bay may inherit certain features, such as size, from that breed.

Be sure to read our article explaining how the Blue Bay Shepherd was created.

With eight breeds in the mix, you can understand why some Blue Bays will be quite large and some may be somewhat smaller.

However, with both wolves and German Shepherds in their background, you can be sure that Blue Bays will be large and tall no matter which parent had more influence biologically.

Usually, the larger a dog is, the longer it takes for him to stop growing.

Whereas a Toy Poodle often reaches full size by 8-9 months of age, a large canine such as a wolf or German Shepherd can continue to increase in size past their second birthday.

A Blue Bay Shepherd’s growth will begin to slow sometime around the 12 month mark but will not stop completely.

By the time they are 2 ½ years old or so, they should be very close to their final adult size.

Several owners have commented on the fact that their Blue Bay appeared quite thin for the first three years of life no matter how much food they consumed.

This appears to be normal for the breed as their bodies focus on growth, not bulk, for the first few years.

Blue Bay Shepherds will not be content to snooze away the hours day after day. These are active, highly energetic dogs who will need plenty of outdoor exercise each day.

They’ll love long walks, hikes over various terrain, games like fetch, or zooming around the yard with a buddy.

If you live an active lifestyle and enjoy spending time outdoors, a Blue Bay may be perfect for you.

Unfortunately, as badly as you may want a Blue Bay Shepherd, your dream may not be possible, thanks to legislation concerning dogs with wolves in their genetic makeup.

Although Blue Bay Shepherds are now many generations away from any pure wolf additions to the bloodline and the breed’s creator has no plans for further wolf pairings, you may run into issues with your state or local governing bodies.

It is highly recommended that you check with your state’s wildlife agency and your local animal control officers before making plans to purchase a Blue Bay Shepherd.

Of course, private citizen ownership of a pure wolf as a pet is banned across all 50 U.S. States, but for wolf dogs and hybrids, the laws can vary quite a bit from state to state.

Despite the fact that the Federal Animal Welfare Act classifies wolf dogs as domestic animals, in some states, such as Massachusetts, Georgia, Wyoming, and Illinois, all wolf dogs are banned.

Be aware that in some states, the laws also pertain to dogs who merely resemble wolves regardless of their actual genetic makeup.

According to Animal Wised, other states which completely ban private ownership of wolf dogs include:

In other states, wolf dogs are recognized as domestic animals, but certain restrictions are imposed.

The stipulations may include special permits, difficult-to-obtain licenses, enclosure guidelines, and restriction of dogs with high percentages of wolf DNA.

Be aware that in some states, if a wolf dog bites a person, no matter the reason, the law states that the dog must be put down.

Some restricted states include California, Virginia, Pennsylvania, and Florida.

In other states, such as New Mexico, Kansas, South Carolina, and New Jersey, ownership of wolf dogs is legal.

However, many counties and cities impose restrictions on wolf hybrids regardless of state laws, and their regulations are often quietly changed or updated.

It’s critical that you research the specific laws that pertain to your area before considering one of these amazing dogs.

Many rental contracts expressly forbid dogs while others may only permit certain sizes and/or breeds.

To save yourself future heartbreak, it’s best to carefully review your lease agreement before bringing home any dog.

Unfortunately, the same thing applies to many insurance policies.

Certain breeds, such as Pit Bulls, Rottweilers, and yes, wolf hybrids, are often discriminated against, and owning one may cause the cancellation of your coverage.

Blue Bays were bred specifically for a stable, gentle, affectionate temperament. These beauties can be excellent family dogs provided that their exercise needs are met daily.

While they’re often praised for being nonaggressive, caution will be needed around any small children as they could be easily knocked over by an enthusiastic Blue Bay zipping by.