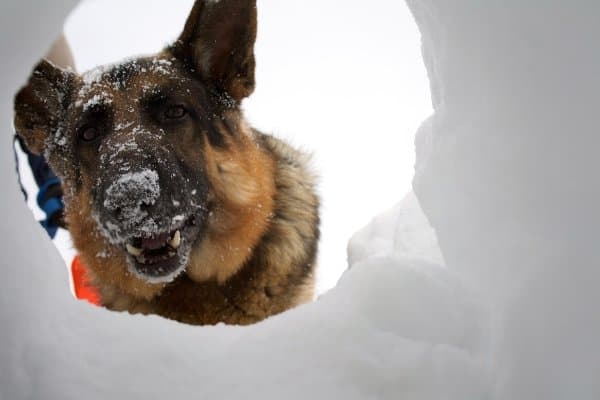 German Shepherds are popular throughout America and are known for being highly versatile working dogs, but how will they do if you spend a lot of time outside in cold temperatures? Here is what you need to know about how German Shepherds handle the cold.

Are all German Shepherds equally well suited to the cold? What are some things that you should keep in mind when bringing your German Shepherd out in the snow?

Here is everything that you need to know about the German Shepherd and cold weather.

The German Shepherd is known as the finest worker among dogs and is renowned for their loyalty, courage, and steadiness in the face of danger. However, what makes them a great cold-weather breed?

The first physical attribute that prepares German Shepherds for the cold is their size. Male German Shepherds weigh from 65 to 90 lb while females range from 50 to 70 lb. This significant size means that Shepherds have some bulk to keep them warm as the temperature decreases.

The outer coat is dense, a bit harsh to the touch, and lies quite close for a sleek appearance. The undercoat is soft, lush, and provides extensive insulation.

These two types of coats work together, with the outer coat protecting from weather and wind and the inner coat providing dry insulation regardless of the weather.

Because these dogs are not accepted by the AKC, they are considerably rarer and often more expensive.

Importantly, while long-haired German Shepherds may look fluffier and seem like they would do better in the cold, most of the time these dogs only have one coat, rather than the double coat that characterizes the standard German Shepherd.

With only the guard hairs to protect them, long-haired Shepherds are much more vulnerable to the cold because they do not have the dense undercoat required to insulate them. You can expect your long-haired Shepherd to get cold faster and be less resistant to weather than shorter varieties. On the plus side, they shed less too.

If you want a German Shepherd who truly excels in the cold, it may be worth seeking out the somewhat unusual double-coated long-haired Shepherd. Keep in mind that even though these dogs have a double coat like the AKC recognized variety, they are still not recognized.

The German Shepherd is a highly active breed who can likely keep themselves warm on a chilly day just by staying busy. Your Shepherd will probably want to run at least several hours a day and of course, Shepherds are skilled in all sorts of activity from agility to herding, to tracking.

This is a dog who is bred to go all day regardless of the temperature, and all that activity helps to keep your Shepherd warm.

How Cold Is Too Cold?

Unlike some Northern breeds who were bred to live and sleep in the snow, like Huskies, Saint Bernards, and Malamutes, German Shepherds were bred to live and work with people and livestock. Your Shepherd won’t mind even extremely cold temperatures as long as they are on the move and active.

In extremely cold temperatures, you made need to protect your Shepherd’s paws with boots/booties or balm.

Their paws were not designed for running through snow all day for extended periods, but rather the Shepherd typically has bursts of activity along with time to lick their paws. If you expect your dog to run all day in the snow, paw protection is in order.

You may assume that your Shepherd will be able to handle the cold with no problem. After all, this is what they were made for, and your Shepherd sure isn’t slowing down. However, even if your dog seems to be having a great time in the snow, there are some things that you can do to make it safer and easier for them.

Keep an eye on indications of your dog’s temperature. If they’re panting while they run and play, they’re probably doing ok. If, however, your dog is running extensively without panting, and especially if you notice your dog shivering or seeming lethargic, get them somewhere warmer immediately.

Paw balm has been used throughout history to protect the paws of dogs who have to track over ice and snow. Musher’s Secret Pet Paw Protection Wax has an excellent reputation for being easy to apply.

The formula even includes vitamin E to heal any wounds as well as keeping paws healthy. Just rub on your dog’s paws before you go outside to protect them from ice, snow, and salt.

Can a German Shepherd Freeze to Death?

While German Shepherds are more resistant to the cold than some other breeds, they certainly can freeze to death. A Shepherd left without cover or provided with only a simple shelter in freezing temperatures may well succumb and freeze to death.

Young dogs, older dogs, and pregnant and nursing mothers are especially vulnerable. This is not a dog who is designed to be out in the elements 24/7, but rather a companion who should stay with the livestock or the family.

How do German Shepherds do in Hot Weather?

The German Shepherd has a versatile coat that tends to do well in all different temperatures. You can expect your German Shepherd to tolerate the hot weather just fine, as long as you make sure that you provide them with plenty of water and don’t let them overexert themselves.

Never shave your German Shepherd in an attempt to cool them off. Their double coat is designed to regulate their temperature and actually keeps them cool. The exception may be with long-haired, single-coated Shepherds, who may benefit from being clipped in hot weather.

Things to Keep Your Shepherd Warm in the Cold

How do I protect German Shepherd paws if they hate paw palm?

If your dog will tolerate wearing them, dog boots (like these) are an excellent way to protect your German Shepherd’s paws from snow, ice, and debris. If your dog works long hours, especially on questionable terrain, these are a great choice.

The best way to train your dog to wear boots is to reward and distract them at first, then get them into the midst of activity so they stop worrying about what’s on their feet.

Can German Shepherds sleep in the snow?

When the workday is over or when your dog is less active, Shepherds will quickly become cold outside in the snow. Shepherds were bred to work hard in the cold but sleep in the warmth. Shepherds need to sleep in an insulated barn with the livestock or in the home with the people.