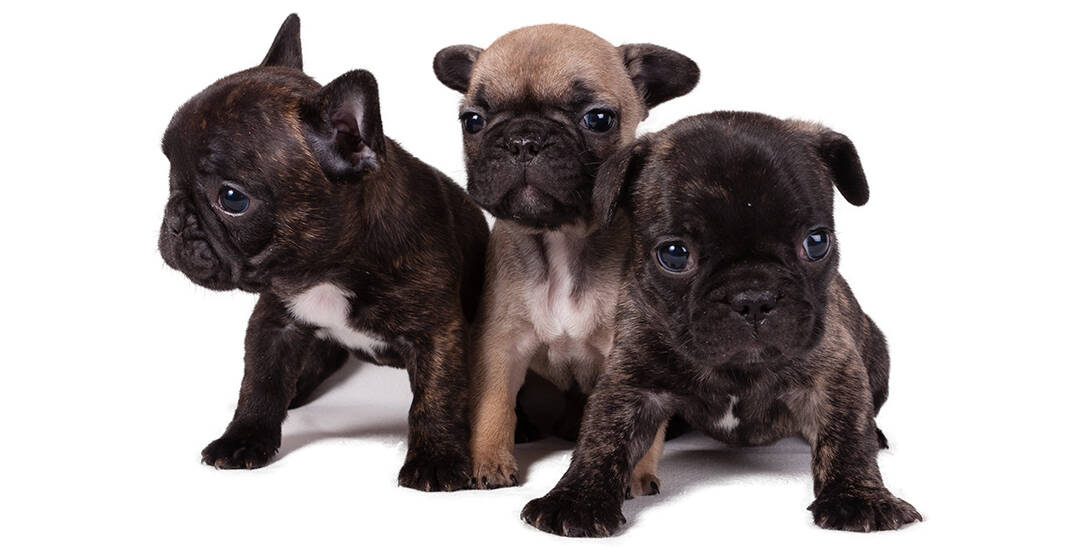 The adult size that a dog will grow to is often a top concern for those looking to add a new pup to their family. With the soaring popularity of French Bulldogs, more people are choosing this breed. They’re highly prized in major cities, where living spaces tend to be smaller. In those areas and others, a relatively small dog breed…that also doesn’t bark much, is a definite plus.

French Bulldogs are a small breed of dog. Not as tiny as a chihuahua but significantly smaller than an English Bulldog.  They were first bred in the 1800s in England when breeders mixed the English Bulldogs with local ratter dogs in an attempt to create a miniature Bulldog.

The result of the experiment was a huge success. Very popular with British lace workers, when those workers then immigrated to France they brought the dogs with them.

Popularity in France grew steadily as these dogs were favorites of many workers. Given the nickname of Frenchie, their small size plays a huge part in its popularity.

So, how big do French Bulldogs get?

Depending on if the French Bulldog is a male or female, the size may vary from 18 pounds to 28 pounds. While this may not seem like a big difference, it can be noticeable in a small dog like the Frenchie. Their height doesn’t really vary that much between genders.

Are There Different Sizes Of Frenchies?

There are two other variations of the French Bulldog, which are substantially smaller than the traditional French Bulldog; Mini and Teacup. These smaller versions are created by breeding the runts of a few different litters.

Unlike the French Bulldog, the Mini (or Micro) and Teacup French Bulldog are not recognized by the American Kennel Club (AKC) because they don’t meet the Traditional breed standard.

They claim they are simply the result of regular French Bulldogs being bred down to that smaller size. Yet, other breeders, who breed, raise and sell these little dogs, claim that they not only exist but also are extremely valuable.

They get their titles of Mini and Teacup from their size. Some breeders of these little dogs state that Mini and Teacups are two different titles for the same dog, but are dependent on the dog’s size. Whereas regular French Bulldogs can weigh up to 28 pounds and be up to 12” tall, these little guys and gals are much smaller.

You won’t find a Teacup French Bulldog that weighs more than 18 pounds, and many Mini Frenchies weigh from 7 to 14 pounds with some as little as 5 pounds.

Just how do these little dogs come about? Through some very careful breeding. Mini or Teacup French Bulldogs are “created” by breeding the runts of the litters. Unfortunately, this is not as easy as one might think.

They seldom get what they want the first time but generally have to try several years and generations to get the exact size French Bulldog they want. It’s been said that it’s taken some breeders up to 20 years to get what they considered the perfect Mini or Teacup dog. One way they’re able to turn a teacup into an even smaller mini dog is by using the smallest runt and mixing it with an even smaller runt.

The downside of using the runts of the litters is that in addition to being runts, these little guys and gals are often also the weakest pups of the litter. It’s not uncommon for one or two pups of a litter to die a day or two after birth and, when this happens, it’s usually the runts that are the first to go. The runts that do survive may become more prone to developing health issues.

Runt to runt breeding can lead to the pups being prone to the same health issues as the French Bulldog plus any issues that have arisen due to their small size. However, those that do survive are believed to have a very good life span. It’s not unusual for a Mini or Teacup French Bulldog to have a life span of 12 to 16 years or more.

Another way of creating Mini French Bulldogs is by breeding the French Bulldog with a small dog of another breed. The disadvantage of doing this is that the puppies would not be able to be registered with the AKC because they have parents of two different breeds.

Mini or Teacup French Bulldogs should be registerable because they are not over 28 pounds. However, their characteristics must stay within the breed standard set by the AKC.

Mini and Teacup French Bulldogs are very popular not just because of their cuteness, but they also make great family pets. While little dogs are seldom a good choice of a dog for children, mini and teacup French Bulldogs love little children and make excellent playmates. These little dogs are also really popular with Royalty. They love a little dog they can actually carry in their pocket!

The traditional French Bulldog is recognized as a breed that can be registered in the AKC. They do have to meet the AKC Breed standards in various areas, and the size is one of these critical areas.

How Much Do French Bulldogs Weigh?

How to Tell if Your Frenchie is Overweight

Being overweight is a problem that affects more than 50% of the dogs in the world, and the French Bulldog is by no means exempt from this problem. With so many families working all day, Frenchie’s are often left home alone and don’t get the exercise they need, which can result in the dog being overweight. Here are some signs your French Bulldog might be overweight.

How Can I Keep My French Bulldog Trim and Healthy?

Exercise is the key here.  As well as monitoring food intake and treats.  While Frenchies do not require a lot of exercise, it’s definitely important to take them on daily walks.  Even around the house or apartment will do the trick. Playtime is also something that keeps your French Bulldog active enough to avoid being unhealthy.

What Size Are They When Born?

Breeding French Bulldogs can be a difficult venture and often dangerous for the mother. This is why the majority of French Bulldog pregnancies are the result of artificial insemination. Many of the deliveries end up being by C-section. New Frenchie mothers often do not know how to care for their newborn, which results in many dead puppies if humans are not around to help.

Needless to say, French Bulldog puppies are a valuable commodity to Frenchie lovers. French Bulldogs generally have small litters with the average litter size at 2 to 4 Frenchies. The size of each puppy is usually affected by the size of the litter. The average weight for newborn French Bulldogs is 11 to 14 ounces with weights ranging from 8 to 20 ounces. 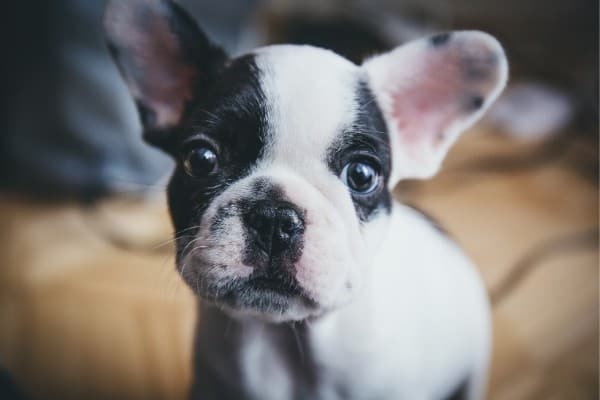 Unlike many other dog breeds that continue growing until they’re almost two years old, the French Bulldog gains most of its height between the ages of 9 months and a year. Height is determined by the height at the withers. The French Bulldog continues to gain weight and fill out until it reaches maturity at about two years of age.

Weight can be determined mostly by the size of the parents. Although it’s not an exact science, experienced breeders can often predict what the dog’s adult size will be by using a formula called and Double Up and Four-Fold.

What is the life expectancy of a French Bulldog?

French Bulldogs have a life expectancy of about 10 to 12 years. While this may seem like a long time, it’s only a moderate life span when compared to other small breed dogs. The various health issues Frenchies are prone to developing often contribute to the shorter life expectancy.

Yes. Like all breeds, French Bulldogs do indeed shed. The degree to which they lose fur, however, can vary from one dog to the next. Learn more about their shedding habits and grooming needs, here.

How much attention do Frenchies need?

Frenchies are infamous for being attention seekers and need a lot of attention. They love attention and do not like being left alone. Often, when they do decide to bark or make noise, it’s because they want attention.

People who are gone from home for long hours yet want a dog should not consider getting a Frenchie because being alone for extended periods of time will not make for a happy Frenchie.

What are similar breeds to French Bulldogs?

French Bulldogs may be small in size, but they’ve proven to be big in terms of popularity. The AKC ranked them No. 4 among the most popular dogs in the United States. With a Frenchie as a family pet, you’ll have a loving and faithful companion as well as one that’s not a monster in size.

For many dog owners, the French Bulldog is the perfect dog! It’s intelligent, loyal, very trainable, small, playful, funny and not too noisy. What more could you ask for?