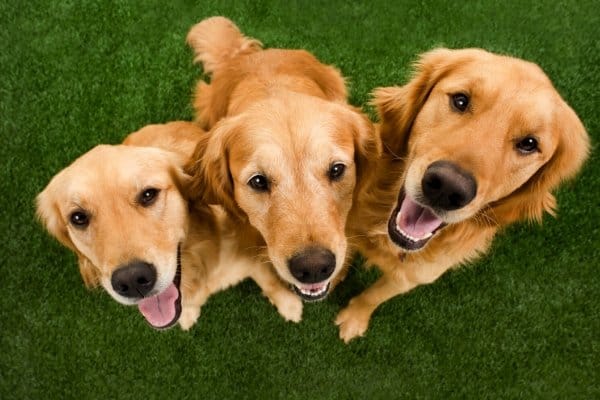 You might have noticed that not all Golden Retrievers look the same. If so, you have a keen eye.

Some have a dark, coppery coat while others are light-colored. Some are stocky, and some are lanky, but have you ever wondered why there is so much variety within this beautiful breed?

To be well versed in all things Golden Retriever related, you should understand the slight variances that are commonly seen in the breed.

In the following, we’ll look at the different types and the various colors that can occur in America’s third most popular breed.

It’s important to understand that while there may be several “types” or varieties of Golden Retrievers, as long as the dog is purebred, it is 100% Golden Retriever, regardless of type.

Each type is not a separate breed; rather each type is simply a variety of one breed, the Golden Retriever.

Most people are very familiar with American Golden Retrievers as they are so popular. Compared to the other types, the American version is lankier and slightly less muscular.

Shades of gold can range from light to dark in American Goldens, but on average, the American tends to be darker than its British predecessor.

British Golden Retrievers are the original breed, and the other “types” stem from them.

Generally, the British Goldens are shorter, stockier, and heavier with broader heads, shorter muzzles, and a more muscular build. They are usually light in color and have round, dark eyes.

Beginning around 1881, Canada began developing its own “version” of the Golden Retriever with stock imported from the United Kingdom.

Today, the most distinguishing feature of Canadian Golden Retrievers is the appearance, specifically of the coat.

There is significantly less feathering on the legs, neck, tail, and underbody.

In addition, the coat itself is generally shorter, slightly thinner, wavier, and lies flat against the body, without the silky, flowing nature of other Goldens.

The undercoat is very dense and acts to not only protect and insulate but also to hold the outer coat down firmly, effectively creating a “jacket” of sorts.

Do Their Temperaments Differ?

All three types of Golden Retriever should have the same classic temperament for which the breed is known and well-loved.

All Goldens should be friendly, affectionate, playful, obedient, gentle, and intelligent.

Of course, poor breeding practices can negatively affect temperament. The way in which a dog is raised, socialized, and trained can also greatly impact temperament.

That said, no matter which region Golden Retrievers come from, they should display a temperament true to their breed, as temperament is one of the defining hallmarks of the breed.

Golden Retrievers are, you guessed it, golden. However, there are three separate variations, or shades, that are recognized.

Each color is unique and lovely but in no way affects the dog’s temperament or intelligence.

With any shade of Golden Retriever, the feathering may be lighter than the rest of the coat. This is normal and is not considered a fault in the show ring.

However, any extremely pale or dark body coloration is deemed undesirable, according to the American Kennel Club.

The shade called golden is what most people think of when they picture a Golden Retriever. This classic look is darker, of course, than the light golden color, and is a lustrous, bright gold.

Also known as standard gold, this classic color has been the most popular for a long time.

The paler shade of the standard color is termed light golden and is the second most common Golden Retriever color.

If you can picture being able to take a standard gold dog and wash out some of the color, you can imagine what a light golden Golden Retriever looks like. Some might describe this coloration as blond.

The term cream refers to Goldens who exhibit an unmistakably lighter shade than a light golden colored dog.

Ranging from a nearly white or off-white color to a very, very light gold, cream Golden Retrievers have been steadily gaining popularity in recent years.

The coloration is often called an English cream or European cream, as dogs with this color are more commonly found in the United Kingdom. However, they are widely available in America as well.

The Golden Retriever Club of America states, “…the cream color has always been part of the full spectrum of colors found in our breed.” Clearly, this color is not unique to British Golden Retrievers.

Perhaps the most striking coat color variation is the dark golden color. Deeply saturated and rich in color, there’s no mistaking a dark golden Golden Retriever for either of the two lighter shades.

The dark, deep gold should not contain any hint of red or amber hues; it should just be a darker version of the standard gold, perhaps with copper undertones.

Puppies born with this coloration are often born with a much lighter colored coat. Breeders recommend looking at the color of the pup’s ears to get a fairly good idea of what the future adult color will be.

Can A Golden Retriever Be White?

Some Golden Retrievers may appear to be white under certain lighting conditions, but in reality, they are actually only a very light cream color.

That is simply an underhanded marketing technique and reflects poorly on the quality and honesty of the breeder.

Are There Red Golden Retrievers?

Though not an officially recognized color, Golden Retrievers can have a coat that is decidedly red or mahogany in color.

The red coloration is probably due to the Irish Setters who were once used in the creation of Golden Retrievers.

Not to be confused with the dark golden coloration, the red color is dark, rich, and deeply saturated.

Although Golden Retrievers with red coloration are disqualified from the show ring, they are still purebred dogs, perfect companions, and identical in temperament to their color-conforming counterparts.

There is a great deal of controversy surrounding this question.

Some die-hard breed enthusiasts take the stance that the genetic makeup of a purebred Golden Retriever does not permit the possibility of a black puppy, ever.

It’s thought that the addition of Flat-Coated Retrievers to the bloodline way back when the Golden Retriever breed was being developed accounts for the occasional Golden born solid black.

Crossbreeding a Golden to another breed can also result in black pups, but these dogs are obviously not purebred Golden Retrievers. They nonetheless can be amazing, beautiful pets!

What is a Black Goldador?

A Goldador, or Golden Labrador, is a mix of a purebred Golden Retriever to a purebred Labrador Retriever.

Depending on the genes contributed from the Labrador parent, some all-black puppies may result in a coat that is either a nice combination of both breeds or that closely resembles just one parent.

Do Golden Retrievers Change Color as They Mature?

Some lighter-colored puppies may darken or deepen slightly as they mature and transition from the soft puppy coat to the adult coat.

By the time a Golden Retriever turns 7 or 8 years old, gray fur is usually evident on the muzzle and around the eyes, giving them a white-masked appearance.