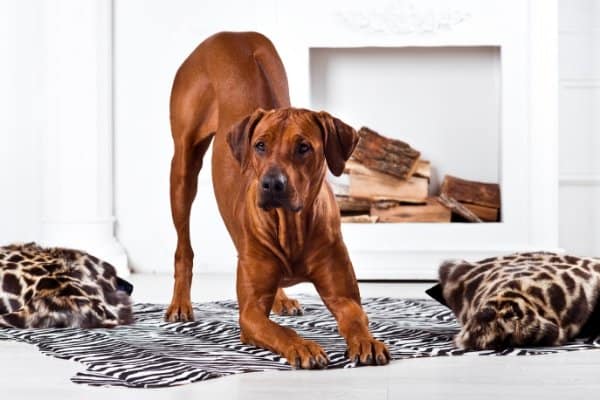 If you are considering a Rhodesian Ridgeback for your family, you are no doubt wondering whether they will be a good house dog or not.

Rhodesian Ridgebacks make excellent family pets, but there are some considerations when choosing one for a house dog.

Here’s what you need to think about before adopting a Rhodesian Ridgeback.

Rhodesian Ridgebacks are utterly devoted to their people, so they do not do well when kept separate from the family.

If you are looking for a guard dog to keep in your backyard, the Ridgeback is not a good choice.

That said, if you have an active and outdoorsy family, your Ridgeback may be able to spend a fair amount of time outside.

Here is what you need to know about ideal living situations for a Rhodesian Ridgeback.

Rhodesian Ridgebacks have short, glossy coats. They do shed, but their shedding is not exceptionally bad, especially compared to other dogs with glossy coats such as Dalmatians.

Ridgebacks do not require much grooming, but brushing weekly or daily will help to reduce shedding in the house.

Otherwise, these dogs tend to keep themselves quite clean. You are unlikely to notice much impact in your home from having a Ridgeback inside.

It is important to note that these are large dogs, and unless they are trained to conduct themselves properly in the house, they can make a nuisance of themselves indoors.

The powerful whip-like tail can easily clear ornaments off of coffee and end tables, so it is best to organize your home with your Ridgeback in mind.

Given enough exercise, Ridgebacks are generally quite lazy in the house and are more likely to spend their time lazing on the couch than doing anything else when indoors.

Rhodesian Ridgebacks are built for warm temperatures and hot climates and will not tolerate the cold. They are devoted family dogs who pine for their family if left alone outdoors.

Furthermore, this dedicated hunting breed may use his superb intelligence to try to escape a yard if he is left alone and bored.

Therefore, it is best not to leave your Rhodesian Ridgeback outside for significant periods.

That said, if you would rather your dog spend his time outdoors instead of in the house while you are away from home, it is possible for your dog to enjoy outside time and act as an excellent watchdog until you return.

Make sure that your yard is extremely secure and resistant to your dog digging under the fence or climbing over it.

It is best that your dog not be able to see through the fence since any sighting of a prey item will drive your dog to try to escape.

Rhodesian Ridgebacks should not be left outside in cold temperatures, and they should always have access to shelter in case of inclement weather.

Once you return home from work or running your errands, your dog should be allowed to come inside with you, or you should go outside to spend time with your dog.

These are dogs who need to be with their families.

Rhodesian Ridgebacks are well known for being excellent family dogs. From their earliest days, this breed served double duty as a fierce hunting dog and family protector.

A Rhodesian Ridgeback won’t think twice about protecting your family from anything that attacks, whether it is a lion, a bear, or an intruder.

Here are some points to keep in mind when considering a Rhodesian Ridgeback for your family.

Rhodesian Ridgebacks have even temperaments and tend to be very patient with children.

No dog should ever have to tolerate a child constantly bothering him, but provided your child is respectful, they will likely have an excellent relationship with your Rhodesian Ridgeback.

It is important to keep in mind that these are very big dogs, so they will need to learn self-control in order to avoid accidentally bumping into your child or knocking them over.

The whip-like tail can be especially difficult to control around children since it tends to be just the right height to hit kids in the face.

They Tend to Be Independent

Rhodesian Ridgebacks are independent dogs who are more likely to make up their own mind than look to you for direction.

Therefore, everyone in the family needs to be on board with training regiments and have clear expectations for the dog.

If you are very excited about having a Rhodesian Ridgeback, but your partner isn’t particularly dedicated to training, this may not be the best breed for your family.

They Have an Overwhelming Prey Drive

Rhodesian Ridgebacks aren’t just driven to hunt prey. They are overwhelmingly driven to chase and kill any kind of prey animal of any size.

It is highly unlikely that you will be able to train your Rhodesian Ridgeback to show self-control on the leash if they see something that they want to chase.

Therefore, this is a dog that only strong members of the family will be able to walk safely.

They Are Reserved With Strangers

Rhodesian Ridgebacks are excellent watchdogs who will not hesitate to defend your family from a potential threat.

Unfortunately, these independently minded dogs have a tendency to make up their own mind about what constitutes a threat.

Therefore, if you have a family with lots of visitors or if your kids often have friends over, a Rhodesian Ridgeback may not be the best choice for your family.

It is essential that adults manage interaction between a Rhodesian Ridgeback and new children in the home, no matter how good the dog is with the family’s children.

Rhodesian Ridgebacks and Other Dogs

Because they have a powerful prey drive, some Rhodesian Ridgebacks may view smaller dogs as prey animals, especially if they were not raised together.

It may be best to keep Rhodesian Ridgebacks only with other large breed dogs.

Because Rhodesian Ridgebacks are brave and tenacious dogs, they are unlikely to back down from a fight.

While it is fairly unlikely for a Rhodesian Ridgeback to start a fight, if another dog in your household engages them, the Ridgeback will probably not back down.

It may be best to monitor your Ridgeback with other dogs in the household until it is clear that they have developed a strong social relationship with lots of positive social signals and play between them.

Mutual indifference is not an indication that a fight is unlikely to break out at some point.

Rhodesian Ridgebacks are not known for being exceptionally difficult to house train, but they are also not one of the breeds who takes to house training naturally.

If your Rhodesian Ridgeback puppy decides to disregard house training, it can be somewhat difficult to change his mind, since these dogs tend to be a bit more independent and less eager to please than some other breeds.

How are Rhodesian Ridgebacks with cats?

If they are raised together, many Rhodesian Ridgebacks will do well with cats, but these dogs do have a strong prey drive, and some individuals may extend their prey instinct to household cats.