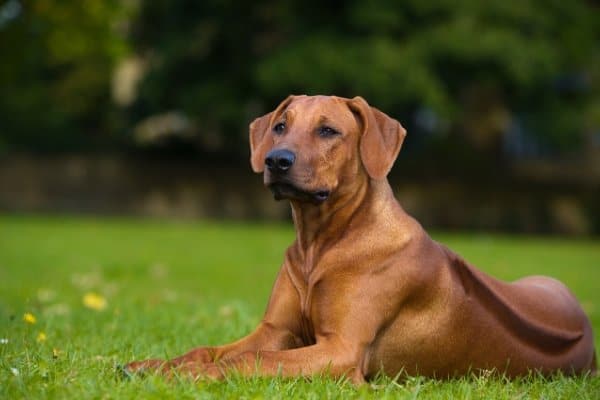 The Rhodesian Ridgeback is a unique breed with stunning good looks, a loyal and affectionate personality, and a fascinating breed background.

However, they also have a reputation for being strong-willed, challenging to train, and aloof with strangers.

What’s good and bad about the Rhodesian Ridgeback? The Rhodesian Ridgeback has great traits like loyalty, bravery, and an even temper. However, they also have characteristics, such as independence and a powerful prey drive, that make them a breed requiring an experienced owner.

If you have ever considered owning a Rhodesian Ridgeback, it is essential that you educate yourself about this breed before adopting one.

The following has everything that you need to know about the Ridgeback, including information about the breed’s personality and characteristics that an ideal owner must have.

The ideal Rhodesian Ridgeback owner will choose this dog for the right reasons.

If the only reason that you want a Ridgeback is because you think that it’s cool to own a dog who was once used to hunt lions, think twice about the decision that you’re making.

Here are some characteristics of an ideal owner for a Rhodesian Ridgeback.

These powerful hunting dogs tend to be independent, like to make up their own minds about situations, and can even be stubborn and domineering.

They need an experienced owner who can enforce rules and boundaries and who knows how to help their dog meet set expectations.

Because these dogs are powerful and courageous, any mishandling can result in a disaster.

Therefore, if you are looking for your first dog, the Rhodesian Ridgeback is probably not a good choice.

Someone Who Understands Prey Drive

If you have never had a hunting breed before, it is probably best that the Rhodesian Ridgeback not be your first dog.

These dogs experience a powerful prey drive which can overwhelm all other instincts and training, including their own sense of self-preservation.

A Rhodesian Ridgeback won’t think twice about putting themselves in danger in order to take on a prey animal.

Their concept of what qualifies as prey includes lions, so don’t expect this dog to back down from anything.

These dogs can never be trusted off-leash and need a securely fenced yard if they are to be allowed off-leash in an open area.

Do not expect your Rhodesian Ridgeback to show self-control when on leash if they see something they want to chase. You must be strong enough to control them.

Considering that Rhodesian Ridgebacks generally weigh around 70 to 85 pounds and are powerfully muscled, it takes a great deal of strength in order to contain them when they decide they would like to run.

Therefore, a Rhodesian Ridgeback owner should be strong enough to control these dogs on leash.

Someone Who Values a Guard Dog

If you want a gregarious dog who loves everybody who comes over, a Ridgeback is probably not the best choice for you.

These dogs are naturally very protective of their family and are unlikely to be easily convinced to accept a new person, even if you try to show them that the new person is okay.

On the other hand, if you want a dog who will protect your home and property from any potential intruders, the Ridgeback is a great choice.

Someone Who Wants a Family Dog

Rhodesian Ridgebacks are highly devoted to their family and cannot be expected to do well if left alone in a yard or kennel for long periods of time.

These dogs need to be with their family and will pine for them if kept alone. Therefore, if you are considering a Rhodesian Ridgeback, you better make space on your couch.

These dogs are well known for their love and tolerance of children, and provided that they are trained to have manners in the home, they make excellent family dogs.

Personality of the Rhodesian Ridgeback

The Rhodesian Ridgeback is a dignified hunting dog who is well known for being brave and tenacious on the hunt and affectionate and loving at home.

These dogs are very even-tempered and especially well known for being gentle with and protective of children.

Brave and Driven to Hunt

A dog bred to hunt lions will never back down from a fight, and these dogs can view practically any kind of animal as potential prey.

Rhodesian Ridgebacks are intelligent and independently minded, and they can even be stubborn or domineering without proper training.

This is a dog who is more likely to have his own thoughts about things and respond accordingly than to look to you for direction.

Ridgebacks cannot be described as eager to please, although they are extremely devoted to their families.

Rhodesian Ridgebacks are more likely to be suspicious than gregarious around new people, so they require a lot of socialization throughout life and may still be reserved and suspicious of strangers even when well-socialized.

Need some more information on correct socialization techniques? Head on over to our in-depth guide to socializing your dog.

These dogs were bred to hunt in a pack, and they generally do well with other large dogs, although some individuals may view smaller dogs and cats as potential prey.

For the most part, provided that they are raised together or carefully introduced, Ridgebacks do well with other large dogs.

May Be Difficult to Train

Characteristics like independence, high prey drive, and reservation with new people are unlikely to be altered even with extensive training and socialization.

Be prepared to accept your Rhodesian Ridgeback for who he is and don’t expect to be able to change many aspects of his personality.

Things Every Owner Should Know

The decision to buy a Rhodesian Ridgeback puppy or adopt an adult dog is a very significant decision.

These are powerful dogs who can do serious damage if not controlled and trained properly, and the choice to own one should never be taken lightly.

Here are some things that every Rhodesian Ridgeback owner should know before choosing to adopt.

Rhodesian Ridgebacks have their own minds, and they are more likely to make a decision on their own than look to you for direction in any given circumstance.

Without proper direction and training throughout life, they can be domineering and very stubborn.

Even with careful direction and training, this is a dog who may need to be physically handled rather than expected to obey in particular circumstances, especially where strange humans or other animals are involved.

These dogs were bred to confront and bay at lions until the hunter could dispatch the big cat.

Furthermore, they were expected to chase down prey like antelopes over huge distances and kill them for their master.

These dogs were never bred to wait for a hunter’s command in order to engage with prey, which means that they have an extremely high prey drive that is unlikely to be tempered by training.

These dogs can never be trusted off-leash and they need strong fences to contain them.

Rhodesian Ridgebacks Are Devoted to Their Families

If you are looking for a guard dog that you can leave out in the yard, look elsewhere.

Rhodesian Ridgebacks are devoted family dogs who will pine for their families if not allowed to spend most of their time with them.

They are well known for being excellent family dogs who are very tolerant of children, but they will likely always be distrustful of new people.

Your Rhodesian Ridgeback won’t hesitate to intimidate intruders, and if the intruder insists on coming into their territory, there is an excellent choice that the dog will engage with them quite ferociously.

These dogs are fearless and utterly devoted to protecting their families.

This is a dog who won’t think twice about fighting off a bear or cougar, and they aren’t afraid to take on human assailants either.

Can Rhodesian Ridgebacks be trained not to chase livestock?

While some individual Ridgebacks may learn to live with livestock without giving into prey drive, this breed is known for having a very strong prey drive that applies to animals of all different sizes.

If you are looking for a dog who can range freely with your livestock, this breed is probably not the best choice.

Why do Rhodesian Ridgebacks have a ridge?

Rhodesian Ridgebacks are descended from the ridged Khoikhoi dog native to South Africa and various European breeds including Terriers and Greyhounds.