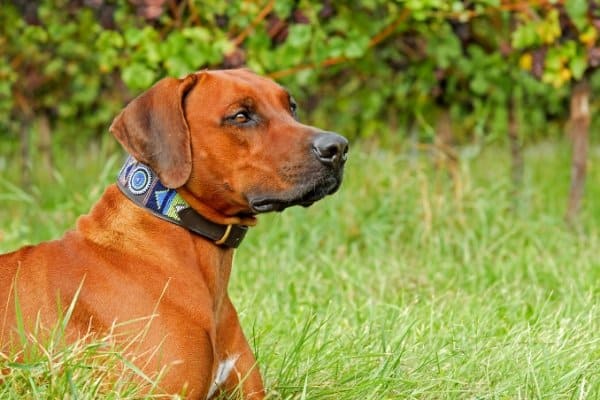 Rhodesian Ridgebacks are powerful, independent, and courageous, but are they dangerous? Well, it depends on the particular circumstance.

Here is everything that you need to know about how and why Rhodesian Ridgebacks can be dangerous, as well as how to raise your dog to be a loving family companion.

Since the earliest days of this breed, Rhodesian Ridgebacks have been well known for their bravery, tenacity, and fearlessness.

After all, these are dogs who have been bred to take on the king of beasts, the lion.

Anyone approaching property that belongs to a Rhodesian Ridgeback will quickly realize that these dogs should not be taken lightly.

The Ridgeback’s bravery, fierce loyalty, and protectiveness of their family have resulted in their reputation as a dangerous dog.

Rhodesian Ridgebacks have always been known for an extremely high prey drive.

They were bred to confront and hold in place an animal that was too big to attack so that the hunter could dispatch it.

When they found any animal small enough to attack, Rhodesian Ridgebacks would not hesitate to do so.

This powerful prey drive still exists in the breed today, and it gives them a reputation for being unsafe around smaller animals.

History of the Rhodesian Ridgeback

Native Khoikhoi Dogs who had the distinct ridge down their backs bred with various European dogs brought by the Dutch colonists, including Terriers of several breeds and Greyhounds.

He found that these dogs and their offspring who carried the distinct back ridge were excellent at confronting lions and holding them at bay, giving the hunter an opportunity to shoot his prey.

Furthermore, the dogs were brave enough to fend off dangerous animals like baboons and leopards and energetic enough to keep up all day with their owners who were riding horses.

They would also periodically break away from the horse and rider in order to chase game. This proved to be an added benefit.

Because of their speed, they were able to chase down even very fast prey animals like antelope, which meant that the hunters also had food to eat on the trail.

These loyal dogs were dedicated to protecting their family and homestead from any sorts of predators or threats.

They were known to be devoted dogs who were tolerant of children in the family and willing to do anything to protect their family from harm.

In 1922, the first Rhodesian Ridgeback standard was written. The breed was on the brink of extinction because large game hunting was fading in South Africa.

At that time, Ridgebacks varied dramatically in size and appearance. The only thing that was common between them was the tawny coloration and the distinctive ridge down the back.

The standard that was developed to describe the ideal appearance of the Ridgeback was actually based on the Dalmatian standard.

Things All Owners Should Know About Rhodesian Ridgebacks

All dogs within a breed vary somewhat, but by looking at a breed’s history and characteristics, you have a much better chance of predicting your particular dog’s tendencies and behavior.

Let’s look at characteristics that are common to most Rhodesian Ridgebacks.

The Rhodesian Ridgeback is not for inexperienced dog owners.

This powerful dog is an independent thinker who is strongly driven by instinct. They can be strong-willed and even domineering.

Rhodesian Ridgebacks should be carefully socialized from puppyhood with people, other dogs, and other animals.

It is essential that you offer them strong leadership and direction so that they know what is and is not appropriate.

Remember that when left to their own devices, a Ridgeback is more than happy to make up his own mind about things in ways you may not like.

While the independent nature of the Ridgeback means that they can occupy themselves around the house, it does not mean that they can tolerate being kept away from their families.

These loyal dogs are famous for their love of children and can be very goofy and charming with their own family, but they will likely always be reserved with strangers.

When you choose to have a Rhodesian Ridgeback, know that you are choosing a dog who is strongly driven to protect your family.

Rhodesian Ridgebacks were bred to chase after pretty much anything that moves without waiting for instruction from the hunter.

Therefore, these dogs can never be trusted to totally ignore their prey drive.

They must never be allowed off-leash, and they need a tall, strong fence in order to keep them from climbing over, digging under, or breaking through in pursuit of prey.

While some individuals can do just fine with smaller pets like cats and little dogs, especially if raised together, others will always experience a strong prey drive that they may act upon at any time toward any type of animal.

Rhodesian Ridgebacks developed running alongside hunters on horseback, and it wasn’t uncommon for them to run all day long.

Not surprisingly, these are energetic dogs who need a fair amount of exercise to stay healthy and happy.

Like most hound dogs, they excel in tracking, and they also will do very well when asked to run alongside you on a jog or beside your bike.

Provided with plenty of exercise for several hours a day, your Ridgeback will probably be happy enough to hang out with you and relax in the house for the rest of the day.

For inspiring ideas and helpful information, visit our Complete Exercise Guide for Puppies and Dogs.

Can Rhodesian Ridgebacks Be Family Dogs?

Rhodesian Ridgebacks have always been noted for their tolerance of children and devotion to their families.

These dogs have even temperaments and tend to be very good-natured with their family.

You shouldn’t be surprised if your Rhodesian Ridgeback fights off a bear or cougar who may be threatening your family, and they won’t think twice about taking on a burglar or assailant either.

That said, these dogs sometimes have a hard time understanding who is a friend and who is a foe.

It is important that they are carefully socialized, and caution should always be used when introducing them to new people.

Even if they know somebody, they cannot be expected to be tolerant of that person coming into their home unexpectedly.

It is best to keep your Rhodesian Ridgeback crated or otherwise contained if you have service people coming over or family members arriving from out of town who your dog doesn’t know well.

It is important to keep in mind that these are big dogs, generally weighing from 70 to 85 pounds, so they need careful training in order to control their big bodies around small children or elderly people.

Do Rhodesian Ridgebacks get along well with other dogs?

Rhodesian Ridgebacks were bred to hunt in packs, and therefore typically do well with other Ridgebacks or other large dogs.

Many Ridgebacks will get along best with members of the opposite sex.

That said, these dogs have a strong prey drive so some individuals may view smaller dogs as possible prey items, especially if they have not been raised together.

Rhodesian Ridgebacks are brave and naturally protective of their family, which makes them excellent watchdogs.

If their intimidating appearance doesn’t scare off an intruder, their powerful baying bark will doubtlessly do the trick.

Can Rhodesian Ridgebacks be apartment dogs?

Rhodesian Ridgebacks are big dogs who require a fair amount of exercise, which means that they are generally not well suited to apartment living.

That said, if you provide your dog with plenty of exercise and mental stimulation, they may be able to handle apartment living.