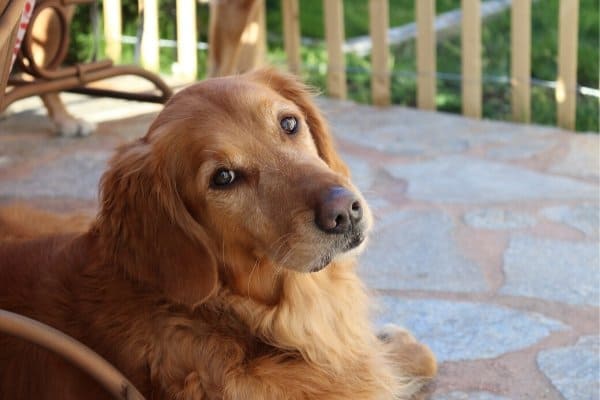 Can Golden Retrievers be aggressive? The fact is that any dog may become aggressive under certain circumstances, even a breed widely praised for its gentle temperament like the Golden Retriever. Fear, abuse, improper rearing, and dominance or territorial issues can contribute to aggression.

Although many conditions can trigger aggressive behavior, there are some factors believed to be leading causes.

Carefully read through the following to learn about each one and how best to deal with an aggressive Golden Retriever.

It’s hard to imagine that a dog with a kind face that always seems to be smiling could ever show aggression, but it can happen.

When it does, owners are often stunned to realize that their sweet dog is capable of this type of behavior.

The first time you witness your Golden exhibiting aggressive behavior, it’s perfectly normal to feel shocked, disappointed, and even a little wary of your dog.

It’s important to remember that, for the most part, dogs act on instinct. In many scenarios, aggression is a natural response, not premeditated bad behavior.

Let’s look at the most common triggers of aggression to help you pinpoint what may be causing the hostile actions.

Aggression borne of fear is also known as defensive aggression and is perhaps the most common cause of hostile behavior in dogs.

Past negative experiences especially contribute to fear aggression. Goldens typically react to fear with the “fight or flight” response.

If the instinct to defend themselves by fighting is chosen, aggression results.

Dogs prone to nervousness are particularly at risk for this type of aggression.

Evidence suggests that genetics play a role in inherited temperament.

Although Golden Retrievers are famous for their gentle and friendly dispositions, if a breeder permits a mentally unstable Golden to reproduce, the offspring may inherit an aggressive temperament.

Only purchase a dog from a well-respected breeder and meet the parent dogs before falling in love with a puppy.

Abuse can take many forms. Goldens who have suffered from emotional or physical neglect, been intentionally harmed physically, been yelled at often, or been mistreated in any way may respond with aggression.

In many instances, the abuse may have occurred before you acquired your dog, and there’s really no way of knowing how bad it was or what the lasting repercussions may be.

Other times, however, abuse may be taking place right under your nose.

For example, I once knew of a Golden who had suddenly become aggressive with no clear explanation as to why… until the children next door were caught red-handed throwing rocks and trash at the poor dog.

No wonder she was an emotional wreck.

A lack of proper socialization can lead to hostile behavior because the dog lacks proper social skills and is unable to distinguish between real and perceived threats.

When this is the case, practically anything can be viewed as a potential threat and is treated accordingly.

Dogs need attention. Being raised without much human contact, exposure to other animals, affection, praise, and training can lead to an unstable, aggressive Golden Retriever.

When a clear “pack leader” is not present, dogs will attempt to assume the role themselves, often aggressively. This dominance could be aimed at you or other animals.

In homes with multiple dogs, squabbles are often witnessed as the dogs establish social hierarchy within their “pack.”

Goldens who are extremely territorial may aggressively protect what they believe is “theirs,” whether the object is property, food, toys, or family members.

Being in pain or not feeling well can lead to irritability that may result in aggressive behaviors.

Dogs often try to hide their pain, so you may not even be aware that something is wrong with your Golden until you see drastic changes, like aggression, in his behavior.

How Do I Stop My Aggressive Golden Retriever?

Regardless of the reason for your Golden Retriever’s aggression, the problem needs to be rectified as soon as possible before disaster strikes.

An aggressive dog could potentially inflict serious damage to you, your family, other people including children, and other animals.

An aggressive dog doesn’t merely present a physical danger. It’s a liability issue as well. In fact, many states hold the dog’s owner strictly liable for any bites.

It’s much better to address your dog’s aggression before a major problem arises.

If you’re at all uncomfortable with trying to correct your Golden’s aggression on your own or are worried about the safety of those around you, enlist a professional’s help to get your dog back on track.

Trainers specializing in aggression issues and behavior modification are available to help as are animal behaviorists, which are basically psychiatrists for pets.

Until the issue has been resolved, avoid all situations that are likely to trigger aggression. It’s simply not worth the risk.

Check with The Association of Professional Dog Trainers to locate an expert near you.

If you prefer to skip the professional and fix the behavior yourself, you must first understand what exactly is causing the aggression.

If you can’t figure out the root of the behavior, your efforts will be in vain.

This step is important because the cause of aggression dictates how it will be best resolved.

For instance, dogs whose aggression is based on fear will need a drastically different approach than dogs who are aggressive because they’re in pain.

The truth is that you may be unknowingly rewarding bad behavior with one of the things a Golden Retriever craves the most, attention.

Too many dogs, any kind of attention, even disciplinary action, is viewed positively.

When your Golden becomes aggressive, your first instinct is often to shout No! and then separate the dog from whatever sparked the response.

Guess what. You not only rewarded him with attention, but you also taught him that if he doesn’t like something, all he has to do is be aggressive, and the problem goes away.

Punishing your Golden for aggressive behavior won’t teach him anything and actually may make the situation much worse.

Hitting, yelling, kicking, or isolating your dog may very well cause him to feel vulnerable or defensive and thus, more aggressive as he attempts to protect himself.

In cases where the aggression is aimed only at other dogs, having your Golden spayed or neutered may help as the hormones that trigger the behavior will be drastically reduced.

Providing the recommended 20 to 30 minutes of exercise twice each day may not be enough when you’re dealing with an aggressive dog.

Increasing physical activity will help to drain off your Golden’s excess energy and leave him in a more relaxed state of mind.

In one of his most popular books, dog-behavior expert Cesar Millan often speaks of the importance of exercising your dog before feeding, training or even offering affection.

He also emphasizes the need to be a calm-assertive leader at all times so your dog won’t feel the need to take on the world all by himself.

Socialization and training should be an ongoing, lifelong process with any dog, but when aggression is an issue, it’s even more important.

However, you’ll need to be extremely cautious to ensure everyone’s safety.

Gradually exposing your Golden, from a safe distance, to situations that tend to trigger aggression and rewarding appropriate, calm behavior can help teach him what is acceptable.

Always use positive reinforcement when socializing and training, and be sure that each session ends on a positive, upbeat note.

Control can be an illusion when you’re dealing with an aggressive dog. Enlisting the help of a professional is really your safest option.