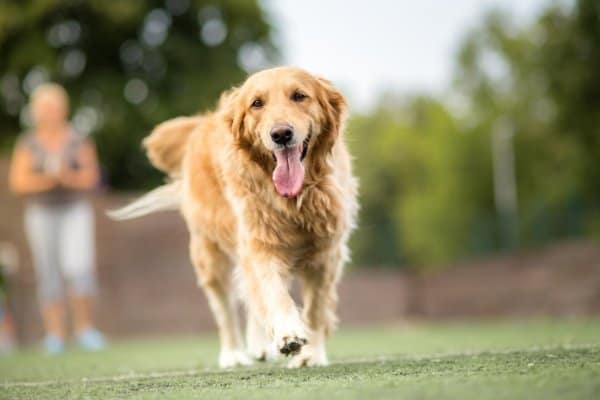 Golden Retriever owners would be quick to tell you that no other dog breed compares to their beloved Goldens. In many ways, they’d be correct.

Golden Retrievers are unique in both appearance and temperament; that’s exactly why they are so incredibly popular.

There are, however, other breeds who bear a slight resemblance to the beautiful Golden Retriever, and who are, without doubt, equally as special in their own way.

What dogs look like Golden Retrievers? Breeds with similar builds, coat type, or coat length, such as the Irish Setter, Labrador Retriever, Great Pyrenees, Nova Scotia Duck Tolling Retriever, and the Kuvasz, can easily be confused with the Golden Retriever.

With over 350 breeds worldwide and 195 breeds registered with the American Kennel Club alone, it’s no wonder that people often confuse one breed for another.

Being familiar with breeds routinely mistaken for a Golden Retriever will prevent you from making an embarrassing mistake.

How to Identify a Golden Retriever

Before we begin looking at breeds similar in appearance to Golden Retrievers, we should first take a close look at the breed to which we’ll be comparing, the Golden Retriever.

This way, we’ll have a clear baseline for comparison.

The Golden Retriever is a well-balanced, sturdy dog with a deep chest and strong, muscular body.

The head is broad with a straight muzzle that is in direct proportion to the head size. The eyes should be round and brown, though dark brown is preferred.

The ears are silky to the touch and hang down close to the cheeks. The face is exceptionally friendly in appearance and gives the impression of a smiling, happy dog.

The gracefully plumed tail is perhaps the most striking feature.

The Golden Retriever is, in part, named for the deep gold coloration of the coat. Interestingly, several degrees of color saturation are common.

Golden Retrievers are classified as being golden, light golden, or dark golden. Various shades within each group are acceptable.

Males weigh between 65 and 75 pounds and are, on average, between 23 and 24 inches tall at the shoulder.

Female Golden Retrievers are slightly smaller and weigh approximately 55 to 65 pounds. They typically reach a height of 21 ½ to 22 ½ inches at the withers.

The Golden Retriever is perhaps one of the happiest, friendliest looking breeds you’re likely to run across.

They are graceful in movement, athletic, and energetic. Goldens are known to retain a puppy-like demeanor well into adulthood and easily charm all new acquaintances.

Their gentle, easy-going, happy-go-lucky temperament is truly a hallmark of this eager-to-please, loyal breed.

Breed enthusiasts are adamant that there is not another breed that rivals their beloved Goldens.

While that may be true, due perhaps to the various depths of shading within the Golden’s coat color spectrum and the classic body composition, there are breeds who are commonly mistaken for Golden Retrievers. 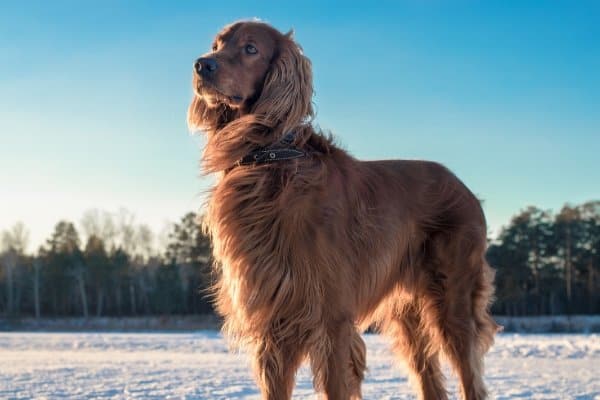 The Irish Setter was one of the breeds used in the development of Golden Retrievers in the 1800s, so it’s no surprise that this breed is sometimes mistaken for a Golden Retriever.

Both Goldens and Irish Setters have kind faces, graceful bodies of similar build, and gorgeous, luxurious long coats with feathering on the legs, chest, ears, belly, and tail.

Both breeds have a sweet, kind nature, are easy to train, and, as members of the sporting group, are superb gundogs.

Irish setters are chestnut or mahogany in color, are much darker than Golden Retrievers, and have a thinner coat. The ears are much longer and set lower on the head.

Irish Setters are larger, standing at 25 to 27 inches tall and weighing between 60 and 70 pounds. Feathering is present but to a much lesser degree. 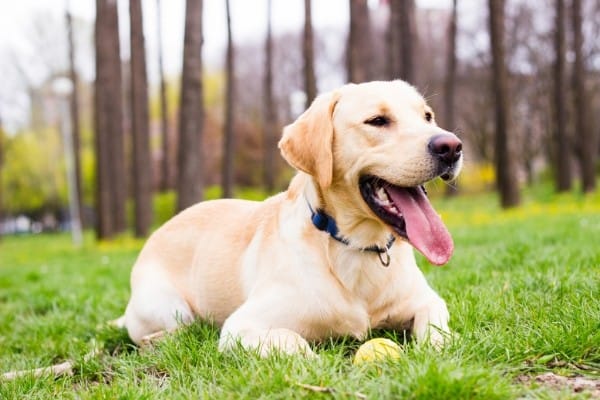 If you were to increase the length of a yellow Lab’s coat, add some feathering and a touch of gold color, the average person would be hard-pressed to differentiate between your creation and a true Golden Retriever.

Goldens and Labs are both retrieving breeds and are very similar in terms of body structure, size, temperament, and facial expression.

They both tend to have large, dark eyes and rather prominent eyebrows which make the eyes and face particularly expressive.

Both breeds are admired for their loyalty and friendly, people-pleasing temperaments.

Labs are usually slightly larger, come in three separate colors, and tend to be more active. The most notable difference is, of course, the coat length.

Compared to a Golden’s long, fluffy coat, a Lab’s coat is always short, nearly completely straight, and does not have any feathering.

A Lab’s muzzle is typically not quite as sharply tapered, and they often appear longer in the leg.

Love Labs? Check out some of our other articles on Labs. 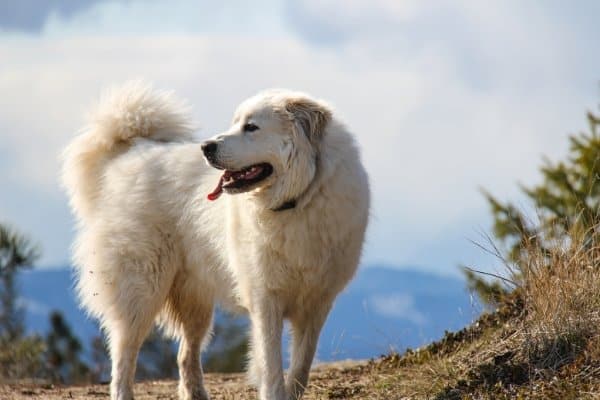 Often described as majestic in appearance, the Great Pyrenees was originally bred to guard and defend flocks in the cold climate of the Pyrenees Mountains.

The Great Pyrenees is similar to the Golden Retriever in that he too is a large dog with an incredibly thick, fluffy coat and gorgeous plumed tail.

Like a Golden Retriever, he’s sturdy and well muscled with a strong love for family and a calm, relaxed, and dignified personality.

Both breeds appear to be smiling when they’re panting and have similar facial features, ears, and body shape.

The Great Pyrenees is much larger at 25 to 30 inches tall and weighing well above 85 pounds.

This breed’s coat is never gold but rather either all white or nearly all white with a few darker markings. Great Pyrenees are sturdier, stockier, and immensely strong.

While both breeds are gentle and calm, the Great Pyrenees possesses a deeply rooted guarding instinct that is not found in Goldens. 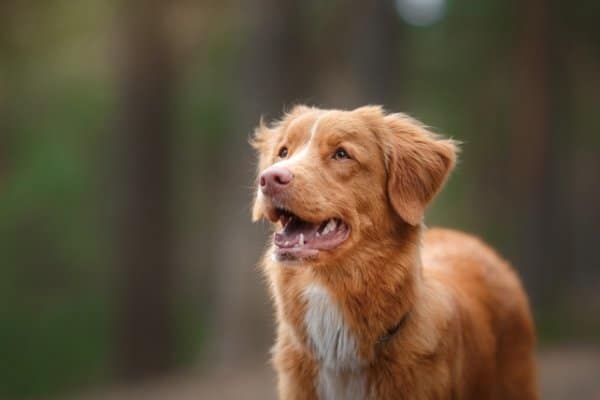 Although not nearly as common as the more popular breeds of today, the Nova Scotia Duck Tolling Retriever could easily be mistaken for a young Golden Retriever.

The medium-length, coppery coat bears a strong resemblance to that of a Golden.

Tollers, as they are affectionately called, are similar in body type to Golden Retrievers with comparable facial features and ears of similar shape and carriage.

The Toller is quite a bit smaller than a Golden at only 35 to 50 pounds and 17 to 21 inches tall. The coat is only lightly feathered and contains more red than a Golden’s does.

White markings on the head, chest, feet, and tip of tail are usually present, and the eyes are almond-shaped rather than round. 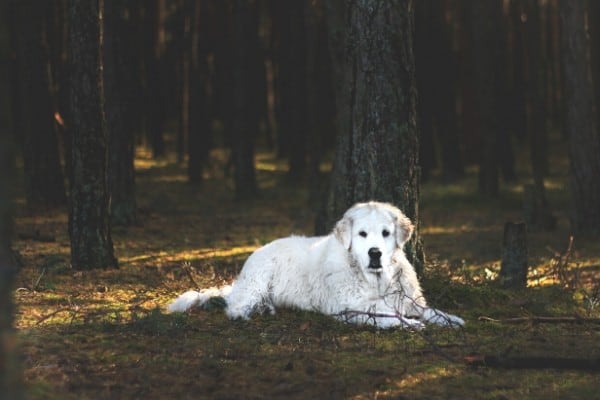 Another breed that might be mistaken for a very light-colored Golden Retriever is the Kuvasz, a flock guardian from Tibet.

Kuvasz and Golden Retrievers both have a thick and luxurious coat that may or may not contain slight waves along the back, feathering on the legs, and a wonderfully plumed tail.

They are both strong, agile, well proportioned, and have intelligent, kind faces with dark eyes.

The two major differences are size and coat. The Kuvasz tips the scales at 70 to 115 pounds and has an average height of 28 inches.

Their coats are pure white (no exceptions) and the skin has heavy gray or black pigmentation.

Unlike the Golden, Kuvasz have a medium-length coat over most of the body, feathering only on the back of the legs and tail, and a thick “mane” around the neck and chest.

Cocker Spaniels, Chesapeake Bay Retrievers, and Curly-Coated Retrievers may also be confused with a Golden, but we felt that these breeds have enough striking features to easily be differentiated from the Golden Retriever.