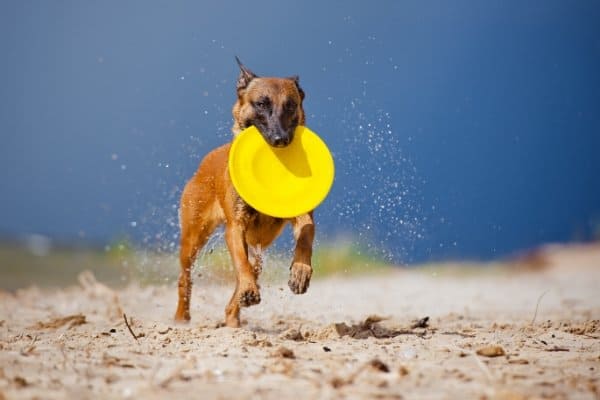 Have you ever noticed that Belgian Malinois puppies have adorable, little folded-over ears, but that the ears change as the dog gets older?

Belgian Malinois are born with folded ears but their ears should straighten as they get older. If your Malinois’ ears aren’t straightening as expected, there are a few things that you can do to help.

Do Belgian Malinois’ ears stand up? Belgian Malinois are supposed to have erect ears, and ears that flop or have folded over tips are not considered appropriate according to the breed standard. If your dog’s ears are not growing upright as they ought to be, there are some things that you can do to help.

Are you wondering when your Belgian Malinois’ ears should stand up, what you can do to help, and what you should do if they’re not up on time? We’ll cover all that and more in the following.

Do Belgian Malinois Ears Stand Up?

The breed standard for the Belgian Malinois states that the ears should be stiff and erect. They should be proportionate to the size of the dog’s head and in the general shape of a triangle.

The outer corner of a Malinois’ ear should not dip below the center of the eye. Ears that hang or fold over at the tip will disqualify a dog for American Kennel Club shows.

How Long Does It Take for a Belgian Malinois’ Ears to Stand Up?

Belgian Malinois are born with floppy ears that fold over adorably into little triangles at the top of their heads.

As the dog gets older, the ears will begin to straighten up. There is usually an awkward stage during which ears are partly folded and partly erect.

It is also perfectly normal for the ears to seem wobbly and unsteady on the top of the dog’s head until they fully grow into their ears.

It is even very common for a puppy’s ears to perk up but then drop back down again before finally coming to their final height.

When this happens, the chances are good that the ears will eventually become erect, so you can set your worries aside if your pup’s ears have gone up and then gone back down.

Most of the time, a Belgian Malinois puppy’s ears will be fully erect by the age of 6 or 8 months.

At this age, the head is not quite fully grown, so the ears may have a tendency to touch at the tips, but in general, the ears will straighten out and arrive at the proper angle by the time the dog is about 8 months or a year old.

A good rule of thumb is that the ears should be erect by the time your puppy has finished teething.

What Can I Do to Encourage My Belgian Malinois Puppy’s Ears to Stand Up?

You want your Belgian Malinois puppy to have the best possible start to life, and that includes growing strong, noble, erect ears.

Here are some things that you can do to set your puppy up for success.

Good nutrition is essential for your dog to develop properly, including the ears.

Your puppy should have enough protein to help them grow but not so much that they gain weight unnecessarily or grow too quickly.

It is very important that they have sufficient calcium in their diet since enough calcium will help the ears develop properly.

Ears are made of cartilage, so glucosamine is a very useful supplement for your puppy as they are growing.

Sufficient glucosamine and another supplement known as chondroitin will help your puppy to develop good, strong cartilage.

Furthermore, these supplements will help your puppy to develop healthy joints, which is an important consideration for large breed dogs like the Belgian Malinois.

Another useful vitamin to make sure is included in your puppy’s diet is vitamin C. Vitamin C is a great source of antioxidants, but more importantly for your dog’s ears, it helps to build cartilage.

Another very important aspect of your puppy’s life to help them develop erect ears are chew toys.

Many owners don’t think about chew toys as related to the ears, but in fact, having good chew toys will exercise your puppy’s jaw, neck, and head.

It’s a good idea to have a nice variety of chew toys on hand to satisfy your puppy’s different chewing urges and to exercise different muscle groups.

Why Does Only One Ear Stand up on My Dog?

Sometimes, puppies may have one ear that stands up before the other. This is perfectly normal and does not mean that the other ear won’t catch up.

However, if your dog is 8 months or older and only has one ear standing up, this may be a bit more permanent.

Sometimes injury, even a relatively minor injury, early in your dog’s life can result in an ear that does not grow properly.

Other times, genetics are at fault for an ear that does not straighten.

Improper nutrition or insufficient calcium early in your dog’s life, as well as worms and other parasites that may rob your puppy’s body of nutrition, can also result in ears not growing properly.

Finally, some dogs are simply genetically predisposed to ears that flop.

This is not a desirable breed characteristic, but if your puppy has unknown or questionable breeding, it may not come as a surprise that the ears do not grow erect as they should.

Some dogs are bred to have larger ears, which can result in ears that are too big for the muscles to hold upright. In these cases, it is unlikely that you will be able to correct the ear.

If your dog’s ears have not stood up by themselves by the time the dog is done teething, it may be necessary to tape the ears if you want to end up with the erect ears that are desirable for this breed.

It is important that taping be done properly since improper taping can cause injury to your dog or result in ears that do not stand the way you want them to.

Here are the steps for properly taping your Belgian Malinois’ ears.

The form should stay in place for about a week.

If your dog insists on messing with it, you may need to use a protective cone to keep your dog from scratching it and knocking the form off.

Some dogs will have erect ears at the end of a week of treatment. Other dogs will need another week or more.

Be sure to clean the ear with adhesive remover and wait a day or so before putting a new form in to give your dog’s ear time to heal.