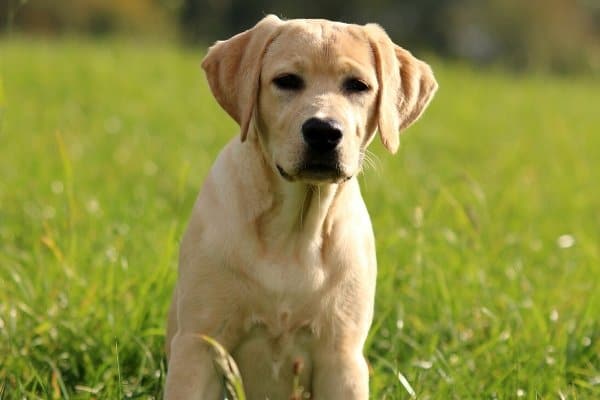 There must be a good reason that Labradors have firmly held onto the #1 position in popularity charts for nearly 30 years, right?

In terms of friendliness, affection, intelligence, and loyalty, this breed is hard to beat. A non-aggressive nature, a playful and exuberant disposition, an eager-to-please attitude, and a love of people has endeared the Labrador to thousands of dedicated enthusiasts.

What you may not be aware of is that while Labs are absolutely wonderful companions, it can take a while for them to reach that point. Actually, quite a while.

When do Labradors mature? Labs will reach physical maturity by 18 months. Sexual maturity will occur between months 6 -9. Though some maturity will be noted before age 2, a Lab will usually take 2 to 4 years to reach full mental maturity, and by the age of 5, a Lab should be well mannered, calm, and a joy to own.

It would be great to wake up one day and say, “Today is my Lab’s first birthday! No more puppy issues! No more chewing slippers! Now he’s an adult! Yippee!” With a Lab, that line of thought is wishful thinking. Not going to happen.

Here’s what you can expect as your Lab slowly inches his way to full maturity and becomes the dog of your dreams and your best friend.

Becoming an adult doesn’t happen overnight. Your Lab will go through several developmental phases, some more drawn out than others, before becoming fully mature.

Still, maturity in Labs can be difficult to measure, because, in some ways, a part of them always seems to retain some endearing puppy characteristics. Really, that’s one of the main reasons they are universally adored.

Let’s look at the three main maturity milestones your Labrador will reach (eventually).

Most Labs will be close to their final height by around the 9-month mark. By 12 months of age, a Lab has reached his full height. However, they’re not quite done growing yet. Until about 18 months, a Lab will continue to add muscle and fat to his frame and fill out quite a bit, leaving behind that gangly, adolescent look.

How Big Will Your Labrador Get?

According to the American Kennel Club, an adult male Labrador should reach 22 ½ – 24 ½ inches tall at the withers (highest point of the shoulders) and weigh between 65 and 80 pounds. Females are typically smaller and should stand between 21 ½ to 23 ½ inches tall and weigh 55 – 70 pounds.

Is There a Difference in Size Between English Labs and American Labs?

American Labs have a finer bone structure, more slender appearance, and narrower, longer muzzles. They’re usually more athletic and energetic and are typically taller and lighter than the English type.

Fun fact: English Labs are more commonly seen in the show ring while American Labs are used more extensively in field trials due to their athleticism and above-average enthusiasm, but both types are Labradors through and through.

Anytime between the ages of 6 -9 months both male and female dogs become sexually mature, capable of producing a litter. Labradors tend to hit sexual maturity a bit later than other breeds of comparable size, but by the time they reach 9 months of age, they’re usually fully capable of reproducing.

Be sure to speak with your veterinarian about having your Lab spayed or neutered. While sterilization was once commonly encouraged before the onset of puberty, recent findings have shown that postponing altering until after a dog’s first birthday may be a better option as his body benefits from the natural hormone production associated with sexual maturity.

This stage of a Labrador’s maturity is often thought of as somewhat elusive, but when it eventually does occur, the difference is like night and day. Large breeds like Labs take longer to mature physically, sexually, and mentally, but Labs, in particular, are famous for taking an extra-long time to finally grow up and calm down a little.

Brace yourself, because the answer here may be far from what you were expecting. Labs retain a puppy-like temperament for at least two full years, but for many Labs, signs of complete maturity won’t be seen until they’re closer to their 4th birthday. Many Labs will still exhibit a puppy’s exuberance, energy, and enthusiasm for fun until they reach 5 years of age.

While defiance, limit testing, and destruction should be on a downward trend by the second year, a 2-year-old Lab is still very much a puppy and will have a ton of energy. Labs who are between 2 and 4 years of age usually have an unrivaled zest for life and are always ready for action.

The question is whether you will dictate your Lab’s activities or allow him to choose his own form of exercise and entertainment.

Be warned, you probably won’t be thrilled with whatever your Lab comes up with. Chewing through Sheetrock, deciding it’s time to replace the kitchen floor, systematically removing your baseboards one by one – these are all possibilities a Lab may come up with when left to his own devices.

For this reason, a sturdy crate is highly recommended until your Lab is fully mature and trustworthy enough to be left on his own in the house.

By the fifth year, most Labs will be well behaved, calm, obedient companions with lower energy levels and a true desire to please their owners.

Of course, every Lab is different, and there’s no magic age when a switch is flipped and they suddenly decide to be perfect pets. Most owners will, however, begin to notice some improvements during their Lab’s second year.

Destructive behavior will begin to subside, not everything will still be viewed as a game, less time will be spent roughhousing, and more time will be spent relaxing. You’ll also notice that your maturing Lab has established a predictable routine as he goes about his days.

Puppy and adolescent behaviors such as stealing shoes, testing the limits, and outright defiance will be gradually replaced by a more calm demeanor and trustworthy behavior.

Will the Teething and Chewing Ever End?

Take heart! By the age of 8 months, your Labrador’s adult teeth should all be in, the needle-sharp puppy teeth will be a distant memory, and teething will be over. Does this mean that the endless chewing and “mouthiness” will magically disappear? Unfortunately, no.

Labradors, by nature, are a mouthy, orally fixated breed. They were, after all, bred to retrieve for hours on end, using their mouths to carry back downed waterfowl (and fish a long time ago) to their masters.

When playing outside, many Labs will constantly have something in their mouths such as a stick, pine cone, ball, anything will do really. Indoors, if appropriate toys (like a Kong) aren’t made available, a Lab will find something to chew on, often to the owner’s dismay. Socks, shoes, remotes, table legs, the list goes on and on (have you ever seen Marley and Me?).

Channeling that love of chewing into appropriate outlets is something you’ll need to do if you’re to survive life with a Lab. A good variety of chew toys, the more “indestructible” the better, will definitely help.

Training your Lab what is acceptable and what is an absolute no-no is crucial. Whenever you find him mouthing something inappropriate, especially if that something happens to be a human hand, immediately say, “No!” in a firm voice, and replace the object with an appropriate toy.

With time and patience on your part, your Labrador will learn, but it’s up to you to teach him and provide him with lots of alternatives to satisfy his need to chew.