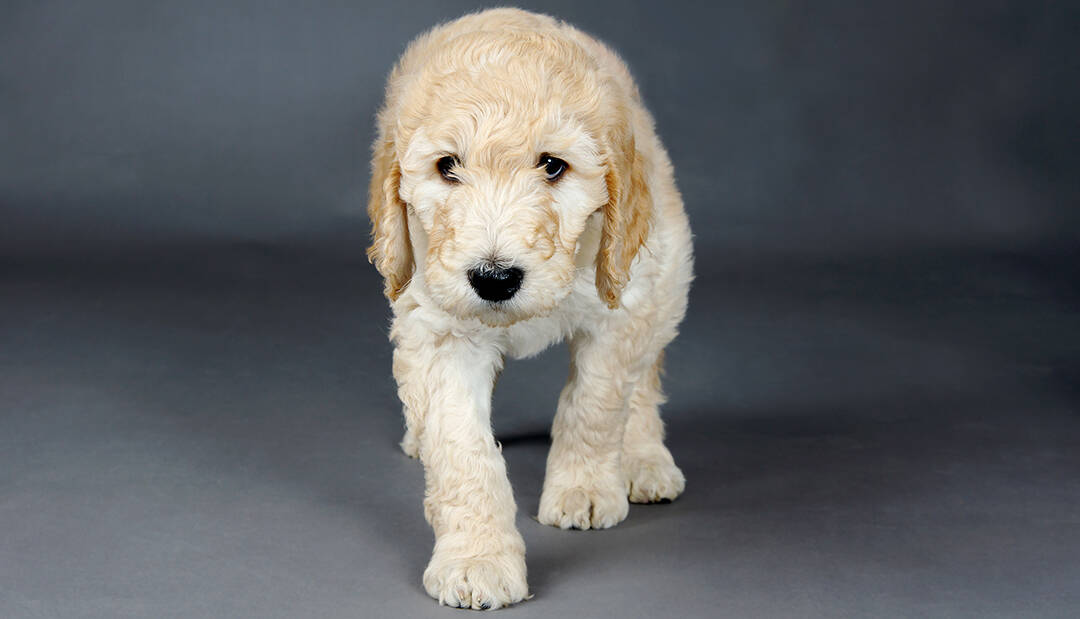 One of the friendliest and most intelligent dogs out there, the Goldendoodle has become a fast favorite for many families. Because of its combination of the Golden Retriever and the Poodle, owners can expect various size options for their Goldendoodle. Since certain sizes can make a dog easier to handle for certain families, it’s important to know just which size is right for you.

So you can see that there is a wide variety here. Anywhere from 15 to 90 pounds is a big difference!

Why are there different sizes?  Which is “best”?  When will the get to their full size?  Let us explain…

There are five versions of the Poodle: Standard, Miniature, Toy, Klein, and Teacup. When it comes to breeding, the Standard, Miniature, and Toy are the most often used. The height of your Goldendoodle will be a blend between what kind of Poodle is used and the Golden Retriever.

Standard Poodles can have a height of 20 to 23 inches tall with a weight of 45 to 80 pounds. Goldendoodles that stem from a Standard Poodle will likely be the taller and heaviest of the versions that you can select from.

Miniature Poodles have a height of 11 to 15 inches tall with a weight of 14 to 18 pounds. Goldendoodles with this Poodle for a parent will be smaller than their Standard versions. They’ll range somewhere between a small and medium-sized breed.

The Toy Poodle has a height of 8 to 10 inches tall with a weight of 6 to 9 pounds. It’s rare for a Toy Poodle to weight anything more than 10 pounds. Goldendoodles that utilize a Toy Poodle parent are going to be small. However, they likely won’t be as small as the actual Toy Poodle because the Golden Retriever’s genes will offset anything too tiny.

The important aspect here is to know the parents of the Goldendoodle that you’re interested in purchasing. If you want a smaller dog, then you should look for breeders who have Miniature or Toy Poodle parents for Goldendoodles.

Activity Levels And Temperament Based On Size

As a general matter, larger Goldendoodles will have higher exercise requirements than the smaller size versions.  That said, they are all active and need daily physical activity to stay healthy and happy

Size plays a minimal role in terms of activity level when it comes to dogs in general. More than anything, it’s the breed that determines how active the dog is going to be. This is because certain breeds of dogs were bred to perform specific tasks. Herders, for example, have a lot of energy because they were bred for running around sheep and herding them. Hunting dog breeds also have a pretty active energy level because they were bred to chase after animals or to fetch fallen quarries.

Larger Goldendoodles will have a higher activity level than their Toy counterparts. This is because Toy breeds aren’t always the most active. They have to expend a lot more energy due to their smaller stature in order to cross the same distance as medium-sized dogs and larger. However, you still try to play with and exercise your Toy Goldendoodle for at least 30 minutes.

Their age is also a determining factor as to their activity levels. Puppy Goldendoodles will require less activity than when they’re adults. Puppies have little bursts of energy but then need naps afterward. Since puppies are growing, too much walking and exercise can actually injure their joints and bones. You should play with your puppy for around 5 to 10 minutes depending on their size and then allow them to nap it off and restore their energy levels.

As adults, Goldendoodles will require exercise based on their size and temperament. Each dog has its own personality and levels of activity. For families who want an active dog, then procuring a larger Goldendoodle may be the best option for you. For those who prefer a quieter dog, then you might want to consider the Toy.

In terms of temperament, again, the breed itself determines the temperament more so than the size. However, you might find that the larger Goldendoodles are more active and thus more playful than the smaller versions of the Goldendoodle. They may be more inclined to perform water sports and play fetch.

Smaller Goldendoodles are just as friendly but they may also be more excitable. Toy Poodles, for example, can be quite excited at certain sounds and bark at them. This behavior may be inherited by your own Toy Goldendoodle. Luckily, it can usually be trained out of them.

Because they enjoy meeting new people, Goldendoodles regardless of size will likely not make for the greatest of guard dogs. Larger Goldendoodles may walk right up to the intruder and greet them. Smaller Goldendoodles, due to their barking habits, might bark and rouse the family from sleep, but they’re just as likely to want to make a new friend as their larger counterparts.

In all, the Goldendoodle is quite a friendly breed no matter what the size. They’re affectionate and gentle.

At What Age Is An Goldendoodle Fully Grown?

In terms of the Goldendoodle, the Toy Goldendoodle will reach its adult size before the others. They’ll likely reach half their adult size around 3 or 4 months and then reach its full height around 6-8 months.

The Miniature Goldendoodle will also reach half of its adult size around the 4-month mark. They will reach their full height around 8 to 12 months.

Finally, the Standard Goldendoodle, which has the most growing to do, will likely need a full year in order to reach its maximum height.

For dogs in general, one year is often how long it takes for the dog to reach its adult size. Larger dogs require a bit more time. Once their adult size has been reached, their remaining years are spent filling out. This means the development of both muscle and fat that is gained through exercise, play, and feeding.

What is the life expectancy of a Goldendoodle?

Since the Standard Goldendoodle is a medium-sized dog, they typically follow the same lifespan for that size. Goldendoodles are expected to live anywhere from 10 years to 15 years. With good nutrition, plenty of exercises, and good health in general, your Goldendoodle can live a long and happy life.

How much attention do Goldendoodles need?

Because they are active, intelligent, and social dogs, Goldendoodles need a lot of attention. In terms of play, they at least need 30 minutes outside with exercise. In terms of attention and affection, you’ll find that the Goldendoodle loves to be cuddled and pet as often as you can give them.

At what age is a standard Goldendoodle full grown?