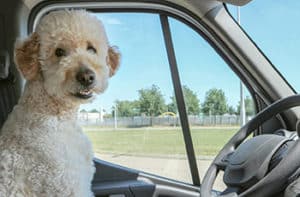 A Goldendoodle will likely never be quite so tiny as a Toy Poodle because of its shared growth from its Golden Retriever side. However, knowing how big Goldendoodles can become and what age they achieve those sizes is important.

What age are Goldendoodles fully grown? How big will they get? Dogs typically take about a year to fully grow. Depending on its parents, a Goldendoodle may reach its full size before a full year. This is the case of Goldendoodles who are Miniature or Small Standard. Large Standard Goldendoodles take around a year to grow.

Some families prefer smaller dogs. They’re easier to take care of and won’t pose a risk of dragging the owner by the leash.

We’ll go into more about the Goldendoodle’s size below!

How Big Will A Goldendoodle Get?

The average size of a Goldendoodle largely depends on the Poodle parent. For families who prefer smaller dogs, you might want to consider having a breeder use a miniature or toy Poodle for your Goldendoodle. This will help curb the size and keep them more manageable for your family. Height is an important aspect of how big your Goldendoodle will become but so is weight.

For a Miniature Goldendoodle, one that is mixed with a toy Poodle, you can expect the Goldendoodle to weight around 15 to 35 pounds. This is quite a small dog can be easily picked up when needed. They also won’t exert as much force on their leash or cause damage when running through the house.

For a Small Standard Goldendoodle, which is mixed with a miniature Poodle, you can expect a weight around 40 to 50 pounds. This is heavier but can still be managed with proper training.

Finally, for a Large Standard Goldendoodle, which is mixed with a Standard Poodle, the weight is around 50 to 90 pounds. This is a larger dog and less easy to carry around yourself. They can also exert a good amount of force on a leash. For families who are concerned about having a larger dog in a smaller space like an apartment, you might want to opt for the smaller sizes of Goldendoodles.

How Long Is A Goldendoodle A Puppy?

The puppy phase of your Goldendoodle begins after birth and depends on its size. For smaller Goldendoodles, they’re a puppy until nine months of age. By that point, they’ve reached their adult size and weight. They might still exhibit some puppy behavior, but physically, they are no longer a puppy.

For larger Goldendoodles, they’re finished with their puppy phase after around 15 months. It takes that much time for them to grow to their adult size and reach their adult weight. To ensure that your Goldendoodle receives all of the nutrition they need during this delicate part of their life, you should keep feeding them puppy food.

If you’re unsure whether or not your dog is underweight, overweight, and if they’re still a puppy, then you can visit your vet. They’ll be able to give you a clearer answer based on your individual dog on whether or not you can start feeding them adult food.

Depending on their size, certain Goldendoodles will experience growth spurts. Even smaller Goldendoodles do, in a sense, but they’re less noticeable. The first six months of the Goldendoodle’s life will be spent growing. In fact, the sixth-month mark is usually when dogs achieve around half of their adult weight.

For smaller dogs, they’ll receive a growth spurt, too, but because of their smaller size, it may seem less spurt-y than larger sizes. By six months, they’re almost already at their full adult weight and size.

Larger Goldendoodles will noticeably shoot up in size over the first sixth months. Once they have reached their adult size and weight anywhere from one year to 15 months, they’ve officially reached their full height. From there, they spend their time filling out. Their weight might increase depending on how active they are and how much they eat.

It’s important to understand how large your dog is going to become. When they’re a puppy, they may seem easy to handle. However, for those expecting larger Goldendoodles, you should understand that they’re going to be facing a growth spurt soon.

It can sometimes be difficult to tell the size of a Goldendoodle based on just its parents. Much like with humans, even children can grow to be larger or smaller than their parents. However, you can select certain Poodles to help influence the size of your Goldendoodle.

For those who also want a smaller dog but are less concerned about smaller spaces and physically managing them, then a Small Standard Goldendoodle will do. This breed is a result of a Miniature Poodle. It can also come from a Standard Poodle that breeds with a Golden Retriever that is a little smaller. 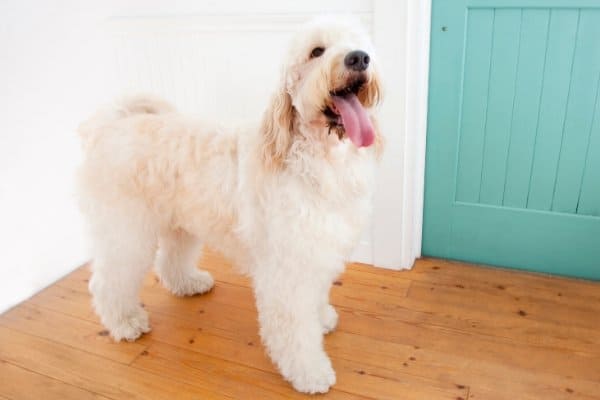 The Small Standard Goldendoodle is the wild card when it comes to the breed. You’re never entirely certain which size you’re going to receive.

Families or owners who want a bigger dog should select the Large Standard Goldendoodle. This is a mix of the Standard Poodle and the Golden Retriever. It’s still classified as a mid-sized dog, so you don’t have to worry about bringing home a Great Dane in disguise.

The Goldendoodle is an active dog. That’s based solely on its breed alone. Both the Poodle and the Golden Retriever loves to play and be played with. They’re also intelligent and require a good deal of mental stimulation in order to prevent boredom. Temperament is not largely dictated by size.

What is the life expectancy of a Goldendoodle?

The lifespan of a Goldendoodle rests around 10-15 years. They are prone to health problems typically associated with both breeds. However, these conditions can be alleviated with a good diet, plenty of exercise, and regular vet trips. Most importantly, a dog requires consistent exercise and mental stimulation to be happy and healthy.

How much attention do Goldendoodles need?

Because Goldendoodles are very social and friendly dogs, they require frequent attention. They need to be played with outside at least for a half-hour. However, some Goldendoodles are perfectly happy just laying at your feet while you watch TV. As long as they are around you, they’re pretty happy.