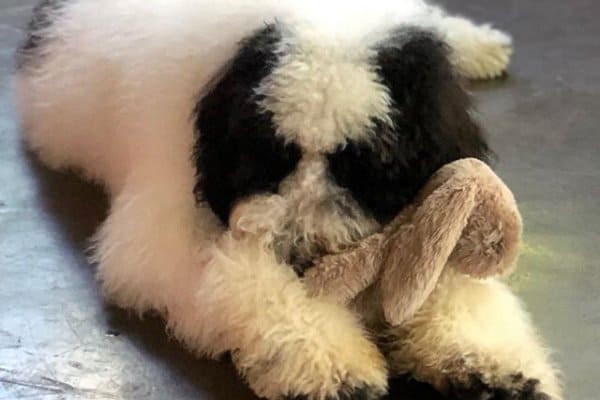 With a beautiful, long, soft coat; a gentle, easy-going personality; and an intelligent, watchful nature, there is a lot to love about a Sheepadoodle.

As puppies, they resemble a cuddly teddy bear, and owners find themselves wishing that their sweet, little puppy would forever stay that size.

Unfortunately, all puppies must grow up. Some will wind up staying relatively small, but others, like a Sheepadoodle, do not.

How big does a Sheepadoodle get? Standard Sheepadoodles are usually 50 – 80 pounds and reach 18 – 28 inches tall at the shoulder, though depending on several factors, some may exceed this range. When a smaller Poodle is used for breeding, the resulting pups’ size will be diminished.

The size of crossbreeds such as Sheepadoodles can vary significantly and is often hard to predict. Several factors determine a puppy’s mature size, but an approximation is possible. Continue reading to learn more.

What Factors Determine a Sheepadoodle’s Size?

Like people, dogs inherit half of their genetic makeup from each of their parents. Some of the inherited traits will be expressed (meaning that you can see their effect) and some will not be.

If you think back to high school biology class, you may recall learning about dominance and recession when studying genes and alleles and how a dominant allele will “win” even if only one is present.

For example, the allele for brown eye coloration is dominant, so if you have one copy of the brown eye allele and one for blue eyes, you will have brown eyes.

With a crossbreed like a Sheepadoodle, things get a little trickier and harder to predict because of the two different breeds involved. Let’s take a look at both parent breeds so you can see how each one may influence your puppy’s future size.

The American Kennel Club (AKC) does not place nearly as much emphasis on an Old English Sheepdog’s weight as it does to the dog’s overall conformation and character, so weight can vary a great deal within the breed. AKC standards indicate that anything between 60 to 100 pounds is acceptable.

It is widely accepted that a puppy’s size is more heavily influenced by his mother than by the father. In almost all Sheepadoodle breedings, the female used is an Old English Sheepdog, which explains why Sheepadoodles tend to be larger on average than the weight range for a Standard Poodle.

Of course, smaller Sheepdogs will tend to produce small puppies and Sheepdogs on the larger side will usually produce bigger puppies. Don’t forget though that the size of the father (usually a Standard Poodle) will influence the puppy’s size as well, so predicting a pup’s future adult size based solely on the mother’s size is not entirely accurate.

The AKC specifies that male Standard Poodles, which are most used when creating Sheepadoodles, be between 60 and 70 pounds and stand over 15 inches tall. This weight range does indeed align with the Sheepadoodle’s average size, but many Sheepadoodles far exceed 70 pounds, especially if the Sheepdog mother was large.

It’s safe to say that the Poodles size limits the final size of a Sheepadoodle litter. If that were not the case, the majority of Sheepadoodles would be much larger than they actually are.

Some breeders choose to use a Miniature Poodle, which is only 10 – 15 pounds and 10 – 15 inches tall, to produce Mini Sheepadoodles. These smaller versions are usually between 24 – 45 pounds and remain below 20 inches tall.

Other breeders market their Sheepadoodles as Moyen Sheepadoodles. This simply means that the Poodle used in breeding was what is referred to as a Moyen Poodle.

Also called medium or Klein Poodles, Moyens don’t fit the weight range of either Standard or Miniature Poodles. Rather, they fall in the middle, typically weighing 20 – 40 pounds and standing 15 – 20 inches tall. This non-standard size is recognized in some European breed clubs but not by the AKC or United Kennel Club.

Moyen Sheepadoodles usually average somewhere around 40 – 55 pounds and will naturally be shorter than a Standard Sheepadoodle. Their temperament should be the same as any other Sheepadoodle’s.

As is true of almost all dogs, whether purebred or crossbred, males are usually both taller and heavier than their female counterparts. Of course, there are always exceptions to the rule, but more often than not, boys will be bigger.

Not all Sheepadoodles are first-generation (F1), meaning they were created using an Old English Sheepdog and a Poodle.

Sometimes an F1 Sheepadoodle is bred to a Poodle, either of standard or miniature size, to further enhance low-shedding qualities or to reduce the size of the puppies.

If an F1 Sheepadoodle is bred to a Miniature Poodle, the resulting puppies would be referred to as an F1b generation, with the “b” standing for backcross, and they would be expected to be smaller than Standard Sheepadoodles.

Some breeders even use Toy Poodles when backcrossing to produce even smaller versions, though artificial insemination is usually required, leading to much more expensive puppies.

Malnourished Sheepadoodles and those who are plagued by intestinal parasites may experience stunted growth, never able to reach their full potential for height and weight.

On the other hand, self-control is not something dogs excel at when it comes to food, and if portion control is not properly handled by the owner, dogs can easily become obese, jeopardizing their health in the process.

While there is no way to tell exactly how big your Sheepadoodle will grow up to be, there are several methods that will provide you with a ballpark figure to go by.

For each method, you’ll need an accurate weight for your puppy. To do this, either bring him to your veterinarian’s office for a quick trip to the scale or hold him in your arms as you stand on your bathroom scale, record the weight, then weigh yourself (I know, it’s never fun) and subtract your weight from the first one.

When your puppy reaches 14 weeks of age, weigh him carefully and multiply that figure but 2.5 to get an approximation of his final weight.

Obtain your Sheepadoodle’s weight when he reaches 20 weeks of age. Divide this number by 20 and then multiply by 52.

If the thought of math fills you with dread, weigh your puppy and let an online puppy growth calculator do the work for you.

In addition to the weight, you will need your puppy’s date of birth, date weight was measured, and you’ll have to select Old English Sheepdog from the breed list, since crossbreeds are not included and your Sheepadoodle’s growth rate will be closer to a Sheepdog’s than a Poodle’s.

When Will My Sheepadoodle Stop Growing?

Large dogs, like Standard Sheepadoodles, take longer to reach their adult size than small dogs do. Generally, a Sheepadoodle will reach his full height by around the 18-month mark though he will continue to fill out as his body gains additional muscle mass and fat until he reaches his second birthday.

When Are Sheepadoodles Considered to Be Fully Mature?

By the time your Sheepadoodle turns 1 year old, many behaviors associated with little puppies, such as accidents, gnawing on fingers, clumsiness, and chewing anything and everything will have disappeared entirely and sexual maturity has already taken place.

As with physical growth, complete mental maturity usually coincides with the second birthday as well, and by the time your big guy turns 2 years old, almost all of the puppy behavior will be a thing of the past and your Sheepadoodle will be considered to be fully mature.