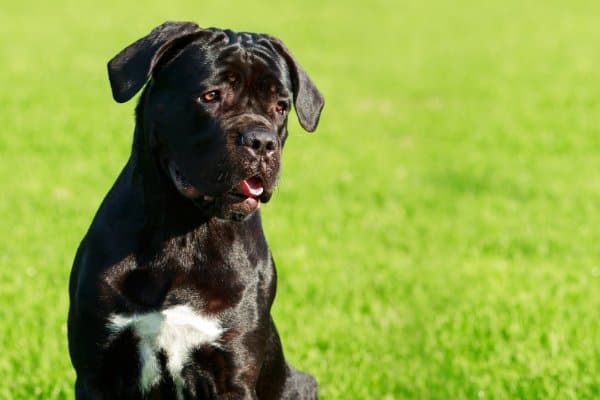 While it may be true that Cane Corsi were bred to have an intimidating appearance, to guard and protect their home and family, and to be confident, assertive, and powerful, the truth is that any dog can be dangerous.

Irresponsible breeding, improper socialization, and lack of training can all result in a fearful, skittish, unstable dog who may engage in dangerous, defensive behavior such as biting. However, because Cane Corsi are so large and powerful, a timid, fearful dog is a very real concern.

How can you help a timid Cane Corso? Understanding why your Cane Corso is afraid and identifying his fear triggers are the first steps. To overcome the fear, gradually allow him to acclimate to the triggers while teaching him to replace the fear with a positive association.

A mature, well socialized Cane Corso should exhibit an air of quiet competence and confidence while maintaining a natural wariness of strangers. Without proper guidance during a puppy’s formative months though, fear, skittishness, and timidness may develop.

Living with a scared, hyper-sensitive Cane Corso isn’t pleasant and could be potentially dangerous. Let’s examine the measures that can be taken to prevent the fear from taking root and how to eliminate it if it already has.

Is My Cane Corso’s Fear Normal?

Before trying to resolve fear issues in your dog, you should be familiar with what is normal and what is not.

Fear periods in puppies are normal.

Constant, irrational fear is not.

All puppies experience two phases during puppyhood known as fear periods, one very early in life and the other during adolescence.

The first fear period occurs between 8 to 12 weeks of age and many times goes unnoticed as the signs are often attributed to them being so young instead of being recognized for what they actually are.

Small puppies display fear in a number of ways. Tucking the tail between the legs, trembling, yelping, hiding, cowering, and even urinating are all ways young puppies show fear.

This stage is characterized by a hesitant curiosity, fear of loud noises, and wariness of new experiences, people, objects, and other animals.

An unpleasant, frightening, or negative experience during this stage of development can have a lasting impact on the pup’s future behavior.

In the wild, this stage would coincide with the puppy’s first few ventures away from the den and the watchful eyes of his mother. This fear period would serve to teach the puppy the difference between things that should be legitimately feared and those that do not warrant a fearful reaction.

The second fear period can take place anytime between the ages of 4 to 14 months and can occur in repeated intervals until maturity.

Older, larger Cane Corso puppies may react to fear unpredictably and quite differently than young pups might. Lashing out, lunging at people and animals, biting, and fleeing are all possible when larger, older puppies are scared.

During a Cane Corso’s adolescence, things that never used to bother him are suddenly terrifying. For example, a neighbor’s flag flapping in the breeze that may have previously gone unnoticed is now a scary object that spooks him easily.

A Cane Corso behaving in this way isn’t trying to revert back to puppyhood in an attempt to be cute. His fears are quite real.

Some experts feel that the sudden, new fears associated with adolescence are due in part to the fact that while the dog may have the body and instincts of an adult dog and has recently begun to feel territorial and courageous, his brain has not matured enough yet to be able to handle these feelings in a mature manner.

This second fear period is a normal part of the maturing process and should disappear by the time the dog is 14 to 16 months old.

Special Note: Cane Corsi were bred to be alert, vigilant guard dogs and will often have a more extreme fear period due to their hyper-alertness.

Showing fear occasionally is normal especially if your dog is still a puppy, but if your Cane Corso is routinely fearful and often skittish, the time to act is now.

How to Help a Timid Cane Corso

Whether your Cane Corso is a puppy or an adult, the process of helping him overcome his fears is the same.

You’ve likely heard that socialization is important for puppies, but with a Cane Corso, socialization should be continued all of his life.

With this breed, early socialization is absolutely critical. Between the ages of 4 to 14 weeks, a puppy’s experiences help to shape and mold his future, adult temperament.

People, animals, objects, and situations that a puppy experiences in a positive way will viewed as normal later in life and not produce a reaction. Any negative experiences, however, may have far-reaching consequences and should be avoided at all costs.

All it takes is one scary experience to impact a dog for life.

All socialization experiences should be positive.

If your puppy has already begun to show irrational fear, you’ll want to proceed with socialization but with great caution as you work to increase your pup’s self-assurance and his trust in you.

Never coddle your dog. This will only reinforce his fears and further destroy his confidence. Your Cane Corso must be able to trust and respect you as the leader.

When your dog shows fear in a situation, stand tall and speak in a normal tone of voice. Redirect his focus to you, move away from the situation, and have an impromptu training session. Ask for a “sit” or “down,” and reward him profusely when he responds and stays focused on you.

Be his leader in every way.

Make a mental note of what exactly scared him so that you can revisit the experience at a later date in a positive way.

Repeat this process every time your dog exhibits fear or is skittish around the unfamiliar. Over time, his fear will be replaced with confidence as he learns to look to you for guidance and direction, a critical step for Cane Corsi.

When your dog has gained some confidence and clearly understands that he can trust you as leader, it’s time to begin desensitization to offending stimuli.

Slowly exposing a dog to less intense versions of his fear triggers and slowly increasing the intensity over time until the trigger no longer produces a negative response is known as desensitizing.

Counterconditioning is the process of replacing a negative response, in this case fear, with a positive association. Pairing desensitization and counterconditioning together is the recommended approach when dealing with a timid, skittish dog.

Before coming up with a plan to help your dog, you must first identify what exactly his fear triggers are so that your plan will be focused. Make a list and work through each issue one at a time, remembering that the process must be gradual.

So you get the idea, here’s an example.

Say your Cane Corso is absolutely terrified by the laughter and squeals of the children’s playground.

A good approach would be to:

Just remember that the entire process will take time and patience and will have to be repeated with each of your dog’s fear triggers, but eventually, your timid Cane Corso will transform into a confident, well-adjusted dog.