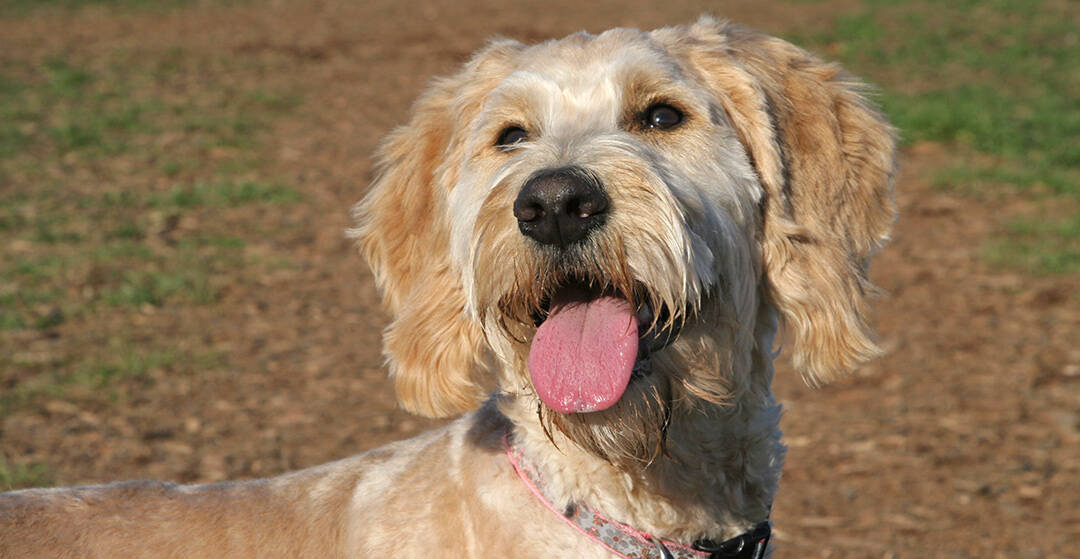 Are Goldendoodles hard to train? No, they are generally quite easy to train because of their intelligence, loyalty, desire to please, and affectionate nature. As with any dog, it’s easiest to train the Goldendoodle when he’s young. For training to be most successful, they should be started early and have a consistent training regiment.

Training shouldn’t be looked at as a daunting task, especially for a Goldendoodle. A well-trained dog is much more enjoyable to be around and much easier for you as the owner.

Our goal here is to arm you with the know-how to get your Goldendoodle off to a great start with potty training, discuss the importance of basic obedience training, and prepare you for the different behavioral phases they’ll go through and how to handle them. Now let’s get into it!

How to Potty Train & Housebreak a Goldendoodle

Housebreaking a Goldendoodle is not as difficult as you might think, but don’t expect it to happen overnight. Despite their high intelligence, they are still animals that have been relieving themselves wherever and whenever they felt the need for several weeks or months. While they will catch on eventually, it won’t happen in one or two days.

As with any training, the key is consistency. If you were lucky enough to get your Goldendoodle as a young puppy, you have the advantage. In most cases, you can begin the housebreaking at around 8 weeks of age. At this age, they’ll need to relieve themselves at least every hour or two, so diligence is paramount! Housebreaking is fairly easy if you’re consistent. These are the times you should bring the puppy outdoors.

Take them outside to the spot you want them to use for potty. If they’re still little, you might want to carry them to the spot to prevent them from going on the porch or too close to the house. Give them a few uninterrupted minutes to do their duty.

Do not interact or play with them. They need to understand that they’re outside for one reason. As soon as they’re finished, say “potty”, pet them, praise them thoroughly and excitedly and give them a treat.

Let them know you’re happy with them and bring them back into the house. Don’t let him stay outdoors to play. That can happen later. In the beginning, they are going to have accidents. When this happens, just take them outside and say “potty”. They may not go because they just finished, but they will come to understand what “potty” means.

Many owners prefer crate training. Dogs will seldom go where they eat and sleep. However, don’t expect them to hold it inside for a long time. They are little and have little bladders. Crate training is good because there is less chance of accidents throughout the house. We talk a lot more about crate training and picking the best crate in this article. Housebreaking your Goldendoodle may take a week or may take two months. Every dog is different, but the key is consistency.

Another tip is to eliminate food and water after a certain time in the evening. It’s unfair to expect a puppy to hold it inside for several hours when they have an open all-you-can-eat or drink buffet 24/7! Goldendoodles are very intelligent animals and they will catch on to what you want in time.

As soon as you get your Goldendoodle home, you should begin basic obedience training. The training he receives as a puppy will stay with him all of his or her life and could even save his life someday.

Because of the Goldendoodle’s sensitivity, it’s important to use positive reinforcement when the dog does what is expected of him. While there a lot of things you can teach your Goldendoodle, here are the things that are most important.

Common Goldendoodle Puppy Phases & How to Handle Them

The Goldendoodle puppy is going to go through many puppy phases. How you handle them will make a big difference in what type of dog they grow up to be.

Puppies bite by nature. They start doing it with their siblings as little puppies and continue to do it because it’s all they know how to do. It’s very common for puppies to nibble on your fingers as you’re petting them. The best way to stop the biting is to stop petting him. Attempt to pet him again. If he starts biting again, stop petting.

If he doesn’t stop biting, just walk away. Dogs, and particularly Goldendoodles, love attention and will eventually catch on that biting is wrong. If it does continue as they get older, gently but firmly say “no”. Despite the fact that Goldendoodles are sensitive dogs, they do need to hear “no” occasionally.

Jumping is something that all puppies do to show their excitement. It’s also something you want to stop to prevent hurting someone. When your dog jumps, you can either gently push him down and say “off” or “down”, or you can turn the other way and just ignore him. In most cases, your dog is jumping to get your attention. By talking to him and giving him attention, even if it’s negative attention, you’re making him want to continue the behavior.

Unbelievably, the best way to teach your dog to stop barking is to first teach him to bark on command. If you know something that makes the dog bark (someone knocking), have a friend or family member do this. When the dog barks, say “speak” and praise him. Continue doing this until he learns to bark on command. Then you can work on “quiet”. Say “quiet” until he stops barking and then praise him.

Puppies are going to chew on things, and there is no way to avoid it other than hiding everything from them, and that is not possible. Chewing is not something they do to be naughty. They do it because they’re bored and/or because they’re teething and it relieves the pain in their gums. Keeping things out of their reach and providing the puppy with chew toys and treats is the best way to get through this phase.

Food Aggression & How to Stop it Early

The earlier you can stop food aggression, the easier it will be to eliminate it altogether. Many owners just assume that it’s a dog thing and, rather than correct the problem, tell family members and guests to just stay away from the dog when he’s eating because the dog doesn’t like it. Giving the dog this kind of control can be dangerous. This behavior should be stopped as soon as it starts.

As soon as you bring your Goldendoodle puppy home you can start with food aggression prevention. The easiest thing to do, is while they’re eating, pet them calmly and touch their ears, tail, and legs. You can also briefly take their food from them while they are eating to get them used to remaining calm while they eat. Repeating this often early on will help reduce the chance of food aggression as they get older.

This is a MUST for families with younger children as they’re bound to disrupt your pup while she’s eating at some point.

When the dog is eating, walk around his dish but not too closely. As soon as he begins growling or showing signs of aggression, walk away. Each time he eats, continue this until the dog seems to relax a little more. Don’t look at the dog or pay him any attention. Just act like you’re walking around the room for something unrelated to him. Try tossing him a treat that you know he likes.

Continue doing this each day until he has so much interest in the treat that he leaves the dish to get the treat. Praise the dog repeatedly for this type of appropriate behavior. Goldendoodles are loving dogs but also very sensitive dogs. They crave positive praise and do not do well with negative interaction.

What are some fun tricks to teach your dog?

Once the dog has mastered basic obedience, there are several tricks you can teach your Goldendoodle. These include:

How long can a dog STAY?

The duration a dog will “STAY” depends on the dog and the training. Service dogs have been known to stay for an hour or longer. Most well-trained dogs will stay for about 10 minutes before they get bored and often forget they were told to stay.

Goldendoodles are a wonderful breed of dog that can provide years of fun and joy to a child or an entire family. With proper training, they can get into competitions and obedience trials or just be a source of pride wherever you take them.