Just one look at a Labradoodle and you can tell they’re cute and cuddly.  But how about their temperament and intelligence? If you’re looking for a dog you can train easily, you’re after a breed that is intelligent, easy-going, and social.

Easily trained dogs are not just smart, they are willing and able to make the association between the prompt and the action. They might understand “Sit” but not be inclined to do it.  With that in mind…

Are Labradoodles Easy to Train? Yes. Labradoodles, because of their highly intelligent and social nature, are easy to train and generally quite eager to learn new tasks. They are pleasers and bond to their humans well. As with all breed, however, early and consistent training are vitally important.

Here are some of the characteristics that make the Labradoodle a good choice as an easy-to-train dog.

Bred from Labradors and Poodles (and in the case of Australian Labradoodles, other breeds including the American and English Cocker Spaniel), Labradoodles are widely noted to be highly intelligent and trainable. As a hybrid or cross-breed, they pull different characteristics from each of the breeds they’re sired from. 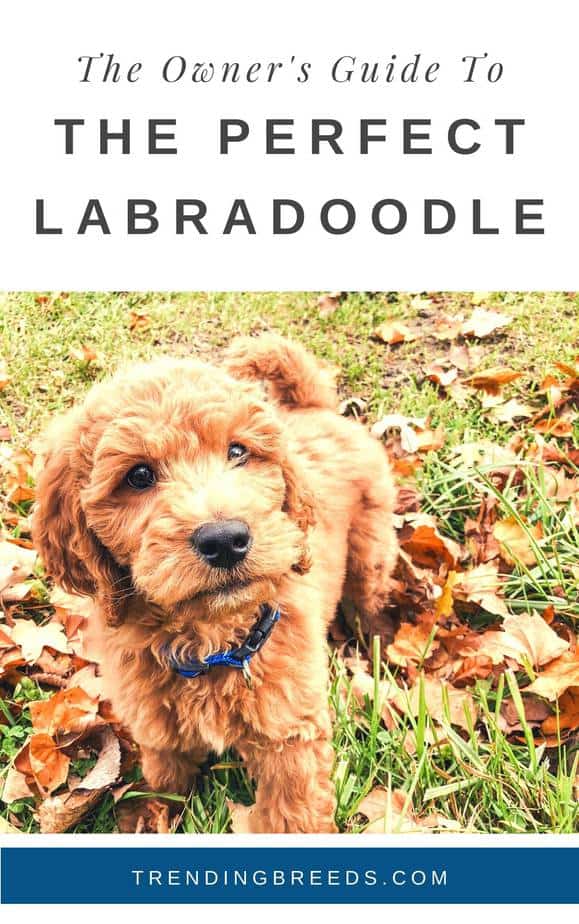 Get Your Copy Today!
Learn More

Socialization is the ability to interact well with other dogs, animals, and humans as well as tolerate various life experiences such as being handled, trained, or swimming. Labradoodles are noted to be very social and friendly, so let’s look at some of the ways to get them socialized quickly and effectively.

Much like children, puppies have a window of socialization early in life. You’ll want to make efforts to help them along with these experience between 3 weeks and around 20 weeks.

If you are not training your dog to be socialized, ready for adulthood, and fun to be around, you’re not doing your job. Start early and get help right away if needed.

Exposure to other dogs in a controlled manner: Dogs you know (friends and family), visiting the local dog park or even doggy daycare. Many experts recommend allowing your dog to meet other dogs while ‘off-leash’. This allows them to express themselves properly and not feel vulnerable because they are confined by a leash.

Being Alone – Separation anxiety: Get your puppy comfortable and used to being in their crate. You can do this by setting aside alone time in the crate each day. Be sure to never use the crate as a punishment – this will quickly backfire on you. The crate should be a place of comfort and protection to them.

Be calm when coming and going. Don’t make your leaving or returning home an exciting moment. Your pup will pick-up on this and add to their emotions and nerves. Try to associate leaving with a treat or toy so they can better deal with the process.

Aggression Prevention: Keep your aggression levels low and don’t be overly anxious to assert yourself over a puppy.  They will understand and respond better to a calm and measured demeanor.

Handling: Puppies need to be handled at an early age to get them used to the experience. Pay special attention to their paws, ears, and mouth. This will get them prepared for a life of vet visits, groomers, and teeth brushing.

Feeding – Animals tend to guard resources like food. Many animals will get tense and nervous when anyone approaches while they are eating.  In general, you can curb this by gradually getting them used to it. Try casually walking up to her and give them another treat in their food bowl, then walk away. You can also touch and handle them as they are feeding. Getting them used to this helps eliminate food aggression (especially important if you have young kids around).

Other people – Here is another area where you’ll just want to be sure you are taking your pup out and seeing other people. The park, extended family visits, going for short walks or even doggy daycare are great options for this experience.

Biting – Play biting happens usually within the first 6 months while they are actively teething.  After that, it should not be happening much. When your puppy bites too hard, make an audible cue for her: “Ouch!” and end the game. AVOID being too aggressive in reacting to this. You are much bigger and stronger than she is. Yelling and grabbing her will likely make the problem worse. Be authoritative but gentle in your response to this. Again seek help early if needed!

Labradoodles have great temperaments as they are a smart, friendly, loyal, active and fun loving breed. They are ready and able to be your loving companion.

This does not mean becoming well trained is just going to happen on its own, however.  Intelligent dogs can be stubborn if left unsocialized and unstimulated. Active and friendly dogs can become reckless and chaotic without boundaries and direction.

That cannot be stressed enough. Keep the 3-20 week window in mind. If you are outside this window, don’t panic…all hope is not lost. Try to find out all you can about their upbringing from the breeder or wherever you’re getting them from.

So now that you know Labradoodles are easy to train, what should you train them to do?

What skills to focus on

Here are some of the essential areas of training every dog owner should work on with their pup. These take time and consistency, so be a patient parent.

How long does it take to house train a Labradoodle?

Generally speaking (and all pups are different), your Labradoodle puppy should be fully house trained by 6-months. This can happen sooner depending on the dog but more importantly, the consistency of the owner. So be patient and understand that their accidents are usually due to you being inconsistent.

When should your Labradoodle start puppy obedience classes?

Basic obedience classes are certainly recommended and can be started between 8 and 12 weeks. They don’t just help with training, they also play a big part in your puppy getting properly socialized.

While you can see that Labradoodles are pretty easy and excited to learn and be trained, it will take some work on your end. It’s uber important that you remain patient through the process and be understanding. Here are some tips to keep in mind as you begin training your pup.

With these things in mind, get out there and train your pup!