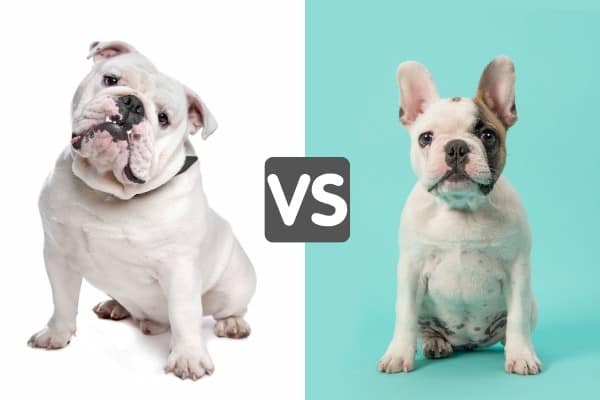 So, you’ve decided that a Bulldog is in your future. Now, the question is, an English Bulldog or a French Bulldog?

Both breeds can be an excellent choice for a new companion, but one is bound to be a better fit for your personality and lifestyle.

While the English and French versions both rank in the top five on popularity charts and have many similarities, they do differ in certain areas, some of which may be pivotal factors in your decision.

Taking a close look at their similarities and notable differences is the best approach to making an informed decision about your future four-legged friend.

This 149-page ebook is the ultimate owner’s guide for the breed – packed with tips, tricks, and answers to the most popular and frequently asked questions. Avoid the frustration, lost time, and wasted money that comes with not knowing how to properly and easily care for your Frenchie.

A French Bulldog is, to some extent, a miniature version of the English Bulldog.

Considering that the former can trace its roots back to the latter, you can expect to see many similarities in the two breeds, and this is indeed the case.

The English Bulldog, according to standards set by the American Kennel Club (AKC), is 14 – 15 inches tall and weighs 40 – 50 pounds.

The ears should be of the “rose” type, folded down and held slightly back. The head is massive with a flat forehead, large jowls, and protruding lower jaw.

The body is barrel-shaped and low set giving a sense of stability and solidness to the overall appearance. The tail is naturally short and may be screwed or straight.

Recognized colors are red, white, fawn, and fallow or any combination of these, and dogs may have the following markings and patterns: black facial mask, black tipping, piebald, brindle, and ticking.

Some breeders produce rare, though not recognized, colors such as chocolate, lilac, blue, and black.

AKC dictates that the French Bulldog stands between 11 – 13 inches tall and weighs less than 28 pounds.

Not all Frenchies will strictly adhere to the standards, but these measurements give you a clear idea of their average size.

French Bulldogs have large, rounded ears that are naturally held upright and open. The head is rather large in relation to the body and has a very compressed muzzle.

Unlike the English Bulldog, a Frenchie’s forehead is slightly rounded, and when the jaws are closed, the bottom front teeth shouldn’t be visible.

Though a French Bulldog is compact and muscular with a “heavy boned” look and thick neck, the body isn’t quite as barrel-shaped as the English version.

Frenchies are born with a short tail that’s either straight or screwed. Head over to this article for more information on the French Bulldog’s tail.

Although the AKC only recognizes fawn, cream, white, brindle, and combinations of these, Frenchies are also available in blue, sable, chocolate, and the ever-popular black.

Markings and patterns include piebald, brindle, ticking, black mask and/or shading, and brindle or white markings.

Be sure to read our comprehensive guide on all the possible French Bulldog colors.

As far as temperament goes, English and French Bulldogs do have some traits in common, but their personalities aren’t identical.

After the fierce “sport” of bull baiting came to an end, breeders of English Bulldogs refocused their goals and worked towards turning this once aggressive breed into a friendly, delightful companion.

Their efforts paid off, and today the English Bulldog is an affectionate, loyal, gentle dog.

With a definite tendency for laziness, the mellow, docile English Bulldog nonetheless is a terrific family dog who gets along very well with children, will bark to alert you of perceived danger, and has a laid-back, easy-going personality.

Rumor has it that an English Bulldog may not be the most intelligent of breeds, but his sweet, calm personality and ability to form close bonds with each family member more than makes up for any lack of brainpower.

A bit on the stubborn side, he would much prefer to lounge around than eagerly participate in a training session, but he is quite capable of learning basic commands.

English Bulldogs have retained a courageous spirit from their bull-baiting days, but they can be rather sensitive too and may easily get their feelings hurt if they are yelled at or treated unkindly.

The French Bulldog is considered to be more intelligent, more playful, and slightly more energetic than his English counterpart.

They don’t tend to bark excessively and love to play (see our recommended toys here); thus, they do very well in apartments.

Frenchies will bond with all family members but often will choose one person as their favorite.

Many French Bulldogs are gentle and playful with children, but others may lack patience and won’t tolerate rough treatment.

It really depends on the dog and the quality of socialization he received when young.

Originally bred to be lapdogs, today’s Frenchies still crave undivided attention and won’t hesitate to engage in clownish behavior to get it.

In fact, this breed actually needs plenty of snuggle time in order to thrive.

Curious to know why they need cuddles? We explain it all in this article.

Overall, Frenchies are gentle, affectionate, even-tempered, adaptable dogs, which is reflected in their enormous popularity.

As is true of all breeds, English and French Bulldogs have certain predispositions to specific health conditions.

Because they are both brachycephalic breeds, many of these conditions are common to both.

Unfortunately, in addition to the ailments shared with French Bulldogs, the list of conditions that plague English Bulldogs is rather long.

They may suffer from bone and joint disorders such as intervertebral disk disease, patellar luxation, shoulder luxation, internalized tail, and hemivertebra.

Skin disorders such as eczema, dermatitis, and allergic responses may be a problem in some English Bulldogs.

Granted, that’s an intimidating list, but know that while the conditions associated with brachycephaly are a real concern, the other conditions are only possible, not necessarily probable.

English Bulldogs usually have a lifespan of 8 – 10 years.

Although the French Bulldog is widely considered to be healthier than the English version, this breed does still have inherent conditions to be aware of.

Frenchies may suffer from the same bone, joint, and skin disorders that are seen in English Bulldogs.

Additionally, issues with the heart such as heart murmurs or heart disease can be a problem stemming from a poor diet, lack of exercise, or a genetic defect.

The life expectancy of Frenchies is generally 10 – 12 years.

Be sure to read all of our Frenchie articles for additional health information and answers to your questions.

Regardless of which breed you choose, routine maintenance such as checkups, clipping toenails, brushing teeth, cleaning ears, and brushing will be necessary.

Although English Bulldogs have a short coat, they do still shed, more so than Frenchies.

Brushing several times a week with a soft-bristled brush, rubber curry brush, or even grooming gloves is recommended.

Long, intensive workout sessions are dangerous for this breed. A short daily walk is about as much as they’ll tolerate. A leisurely stroll for 20 – 30 minutes is typically acceptable.

While Frenchies don’t require quite as much brushing, as they shed less than English Bulldogs, the trade-off is that they’ll need a bit more exercise each day.

By nature, Frenchies are more playful and energetic than their lumbering English counterparts, so meeting their higher exercise needs isn’t too difficult.

A short walk twice per day will meet most Frenchies’ needs as will a couple of brief playtimes.

Check with our Frenchie Exercise Guide for a detailed look at what’s required.

Special Note: Swimming is not a safe form of exercise for English and French Bulldogs.

As delightful as they are, Frenchies do require routine maintenance to stay healthy and free of skin infections, especially around the wrinkles.

This is just one aspect of their care that we cover extensively in The Owner’s Guide To The Perfect French Bulldog.

This comprehensive guide to the breed walks you through breeder and puppy selection, puppy proofing, training, supplies needed, daily requirements, feeding, grooming, and so much more.

It even lays out mistakes new owners tend to make so that you can avoid future frustration and headaches.

It’s a must-have for anyone even considering adding a Frenchie to the family. Grab your copy today!

The price of a purebred dog often depends on several factors such as:

English Bulldog puppies generally cost between $1,500 and $4,000. Those with breeding rights or potential for the show ring can cost quite a bit more.

Here’s How It Boils Down

Deciding between two amazing breeds isn’t easy. If your budget and lifestyle permit, you could get one of each, but for many people, this isn’t an option.

Maybe the following will help you choose.

An English Bulldog Is Right for You:

A French Bulldog Is Right for You: