Poodles have been crossed with other breeds for quite a while now with the aim of producing low-shedding, hypoallergenic crossbred puppies.

Lovingly referred to as Doodles, these Poodle mixes quickly skyrocketed in popularity and are well known for having superb temperaments.

Some of the most popular Doodles include the Goldendoodle, Labradoodle, Cavapoo, and the Bernedoodle, to name a few, but have you ever heard of a Sheepadoodle?

What is a Sheepadoodle? A Sheepadoodle is a cross between an Old English Sheepdog and a Standard Poodle. Sheepadoodles are treasured for their sweet and obedient nature, their gorgeous soft coats, and their tendency to shed little and be well tolerated by allergy sufferers.

So, what is it about Sheepadoodles that makes them so special? Let’s take a look at all the wonderful features of this delightful crossbreed.

How is a Sheepadoodle Produced?

Ordinarily, a female Old English Sheepdog is bred to a male Standard Poodle to create a litter of adorable Sheepadoodle puppies. Pups from a breeding such as this are called first-generation (F1) and can inherit traits from either parent, though many F1 pups more closely resemble a Sheepdog in physical appearance.

Some breeders attempting to increase low-shedding qualities will breed two F1 Sheepadoodles together or breed an F1 to a Poodle, though breedings like this aren’t very common.

Often described as looking like a large, cuddly teddy bear, Sheepadoodles have a fluffy, soft coat that can be rather straight like a Sheepdog’s, have lovely waves, or consist of curls similar to, though not as tight as, a Poodle’s coat.

A Sheepadoodle may inherit a single coat from his Poodle parent or a double coat from the Sheepdog side. Most Sheepadoodles are either solid black or black and white though the rich black color that a pup is born with often fades to a dark gray as the dog matures.

Some breeders are focusing on producing other colors including red and white, tricolor, chocolate, blue, and sable as well as patterns such as brindle and merle though these variations are still considered to be rare.

Full-grown Sheepadoodles typically weigh between 50 and 80 pounds and reach 18 to 28 inches tall at the shoulder. They are sturdy and well-muscled with blocky heads that feature silky, low-hanging ears, broad skulls, and long muzzles. 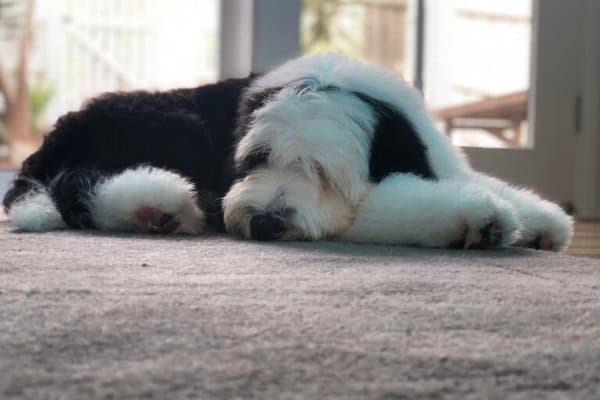 Are There Different Sizes?

Though not as prevalent as standard Sheepadoodles, Mini Sheepadoodles do exist and are the product of a Sheepdog being paired to a Miniature Poodle. They usually only weigh 24 – 45 pounds and are typically less than 20 inches tall.

One of the major reasons Sheepadoodles are so beloved is their remarkable personalities. They are outgoing, gentle, affectionate, smart, laid-back, snuggly, loyal companions.

Playful and energetic when outside, but calm and well mannered when indoors, it’s no wonder that people fall so in love with this crossbreed.

Sheepadoodles are an excellent choice for a family dog. They’ll bond closely with each family member, train easily, and are typically very gentle with children.

Instead of trying to herd little ones like their Sheepdog relatives might, Sheepadoodles prefer to protectively watch over them and will delight in playing with them outside.

Aggression is practically unheard in this friendly breed. They usually get along very well with other family pets and quickly make friends when visitors drop by.

All of that wonderfully soft fur, whether it is straight, wavy, or curly, will need some routine upkeep to remove tangles, prevent mats, and keep the coat looking its best.

Plan on a thorough brushing at least once or twice a week with a slicker brush, though more frequent brushings may be needed during seasonal shedding and for dogs with a coat more like a Sheepdog.

For the sake of convenience, many owners opt to have their Sheepadoodle’s coat clipped regularly by a professional groomer. Others prefer to only have their dog trimmed during the summer months.

Bathing a dog with copious amounts of fur can be a time-consuming job, so you’ll be glad to know that a bath should only be given when absolutely necessary. When you do bathe your dog, be certain to rinse thoroughly and allow the coat to dry completely before brushing it out.

Your Sheepadoodle will also need the fur around his eyes trimmed every so often or pulled back and secured with a hair tie so that his vision is not obstructed.

Aside from coat maintenance, Sheepadoodles, like all dogs, will need to have their nails clipped every month or so, their ears routinely checked and cleaned, and their teeth brushed a couple of times per week.

While all dogs do shed to some degree, Sheepadoodles are generally considered to be low-shedding dogs despite all of that gorgeous fur.

Those that inherit a Poodle-like coat will shed the least while those with a coat more similar to a Sheepdog might shed a bit more heavily.

While no dog is 100% hypoallergenic, Sheepadoodles, especially those with a more Poodle-like coat, are usually fairly well tolerated by those with mild allergies. The vast majority of dander remains trapped within the coat, and therefore doesn’t become airborne as much as it does with other breeds.

How Much Exercise Does a Sheepadoodle Need?

The key to good behavior is often simply making sure that your dog is receiving enough daily exercise. Though bad behavior is rarely a problem with this crossbreed, adequate physical activity each day will discourage your Sheepadoodle from being a little too rambunctious when indoors.

The Golden Rule for puppy exercise, regardless of breed, is 5 minutes of light exercise per month of age, up to twice daily. A growing pup can easily damage his joints and still-developing skeletal system by overexerting himself or by engaging in high-impact activities like jumping, so always supervise playtime and keep exercise periods short.

A mature Sheepadoodle will need about 60 minutes of exercise every day, but this time can be split between a couple of shorter sessions. A half-hour walk or jog in the morning and a high-spirited playtime in the backyard or at the dog park for 30 minutes in the afternoon would suffice nicely.

The majority of Sheepadoodles love to swim, so if you have a pool or live near a calm lake, your Sheepadoodle won’t mind at all getting his workout in the water. Just make sure to allow enough time for him to dry off before it’s time to head inside or hop back in your nice, clean car.

Are Sheepadoodles Easy to Train?

These wonderful designer dogs are people-pleasers at heart and have a reputation for being highly trainable and obedient. They’ll respond best to reward-based training and lots of positive reinforcement.

Remember that early socialization is critical and should be a top priority in conjunction with housebreaking and the teaching of basic commands.

Sheepadoodles tend to enjoy relatively good health, though because they’re a crossbreed, health conditions that commonly affect either parent breed can be an issue.

Note that these conditions are merely possible, not probable, and chances are good that your Sheepadoodle will enjoy a lifetime of good health.

Can A Sheepadoodle Be Registered?

Because Sheepadoodles are a crossbreed, they aren’t officially recognized by purebred clubs like the American Kennel Club (AKC) and the United Kennel Club (UKC). They can, however, participate in club sporting events by enrolling in the AKC’s Canine Partners program or the UKC’s Performance Listing Program.

Sheepadoodles can be registered with the Dog Registry of America, the American Canine Hybrid Club, and the International Designer Canine Registry.

How Much Do Sheepadoodles Cost?

As is true of most designer dogs, prices for a Sheepadoodle puppy can vary quite a bit due to factors such as coat color, desirable markings, and pedigrees. Prices generally fall between $1,000 and $3,000 for a standard Sheepadoodle. Most breeders charge at least $500 more for a Mini Sheepadoodle.