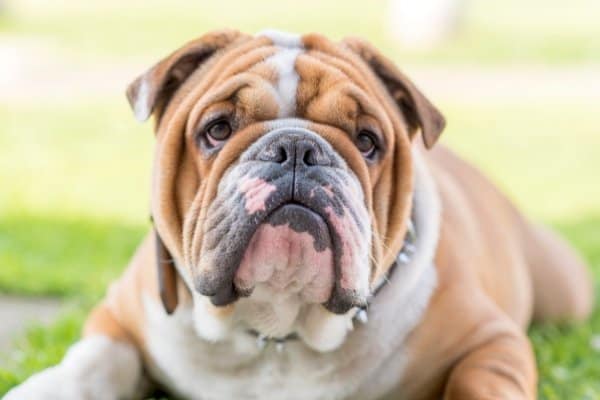 English Bulldog breeders often plan months in advance for their litters, carefully selecting a sire and dam, testing both parents for breed-specific health issues, and even lining up homes for the puppies yet to be conceived.

Whether you’ve carefully planned your English Bulldog’s pregnancy or suspect that she may have been bred without your knowledge, you’ll want to know for sure whether or not she is indeed expecting a litter of puppies.

How can you tell if your English Bulldog is pregnant? A veterinarian can detect pregnancy three weeks or so after mating has occurred. Until that milestone has been reached, look for changes in energy levels, appetite, behavior, urination, nipple size and color, vaginal discharge, and weight.

Let’s look more closely at the signs of pregnancy in English Bulldogs.

Your veterinarian can check for pregnancy as early as three weeks after mating occurred by performing an ultrasound or blood test.

Between days 28 and 35, your vet can palpate the abdomen to feel for developing pups, and around day 45, an X-ray can determine how many puppies there likely are.

If you haven’t made it to the vet yet, be sure to schedule an appointment as soon as possible.

In the meantime, keep a close eye on your pet and look for the following signs of pregnancy.

Pregnancy takes a lot out of a dog, and many pregnant dogs will have an increased desire to rest, even in the early stages.

For many, just a routine walk is enough to warrant a long nap afterwards.

Some dogs, though, continue to act normally for the first couple of weeks after conception has occurred, so energy levels alone are not a clear indication of pregnancy.

Appetite changes are normal during pregnancy and will vary from dog to dog and change as the pregnancy progresses.

Some dogs will eat less than usual during the first month or so after becoming pregnant while others may show no change at all in food consumption.

During the second half of the pregnancy most dogs will have an increase in appetite which will remain constant until the puppies are weaned.

Although she may be hungrier than usual, her stomach isn’t able to hold as much as normal with the puppies taking up more and more internal space, so smaller portions offered more frequently throughout the day will be necessary.

Some pregnant Bulldogs may experience bouts of “morning sickness” just as many women do, though stomach upset may occur at any time throughout the day and may not always result in vomiting.

Usually, her tummy will calm down once she is about one third through the pregnancy.

Deviants from normal behavior are often one of the first clues that your Bulldog is pregnant.

Dogs with an independent personality may suddenly become more clingy, seeking attention and reassurance constantly, and dogs who typically love to snuggle may prefer to be alone.

Don’t fret. Behavior changes are just due to hormone fluctuations and the physical changes your dog is experiencing.

They are only temporary, and once the puppies are born and start to gain some independence, your sweet girl’s regular personality will return.

Any woman who’s experienced pregnancy can relate to this common sign of pregnancy.

As the puppies grow and fill the abdominal cavity, the bladder becomes more and more compressed, and your dog will feel the urge to go outside more often than normal.

About one month into the pregnancy, a dog’s nipples will become enlarged, more prominent, and will appear darker or more pink than usual as blood flow to the area increases.

As the mammary glands continue to develop in preparation for providing nourishment for the coming pups, the teats will grow larger and larger as her due date draws near.

If your dog is pregnant, you may also notice a semi-clear fluid occasionally leaking from the nipples spontaneously or when they are stimulated in any way.

In some dogs, dripping milk may occur as early as one month into the pregnancy, but in other dogs this may not be evident until a week or so before labor begins.

Another sign of pregnancy in Bulldogs is a slight discharge from the vagina.

The secretion usually is of a thick, mucus-like consistency and clear in color, though a pinkish tinge may be seen as well. This is normal and is no cause for concern.

However, if blood is clearly present; the discharge is brown, green, or black; or is accompanied by a foul odor, the pregnancy might be in jeopardy and you should bring your Bulldog to the vet as soon as possible.

Pregnant dogs really don’t tend to gain much weight until the second half of the pregnancy.

So, if you’ve noticed that your Bulldog is steadily gaining weight and can already see her abdomen growing full and large, chances are that she’s already past the halfway point in the pregnancy.

After day 35, appetite should steadily grow, the belly will swell more by the day, and weight will consistently increase until delivery, at which point most dogs will weigh up to 50% more than normal.

Towards the end of pregnancy, most dogs will exhibit some type of nesting behavior in an attempt to prepare for birth.

Some will dig a hole outside, some will seek out a secluded, quiet spot in the house, some may try to burrow through the carpet or couch, and some will drag blankets or other bedding materials to a private corner or closet.

Will a Human Pregnancy Test Work on a Dog?

However, your veterinarian can perform a blood test on your dog to detect pregnancy.

This test for canines measures levels of the hormone relaxin and can be given 22 -27 days after breeding has occurred.

Yes, false pregnancies are fairly common in females who haven’t been spayed and have just finished their heat cycle.

The cause is thought to be the normal hormonal fluctuations during the estrus cycle that may trick the female’s body and mind into believing a pregnancy exists.

Female Bulldogs experiencing a false pregnancy will exhibit many outward signs of being pregnant, even though successful breeding has not occurred, the hormone relaxin is not present, and no embryos are growing in the womb.

Although a false pregnancy can occur without a male ever being present, females in heat who have been in proximity to an intact male, whether or not a breeding attempt was made, are more likely to undergo a false pregnancy.

This condition is also known as pseudopregnancy, pseudocyesis, or phantom pregnancy.

Most pseudopregnancies last between 2 and 4 weeks, and in some cases culminate in the female experiencing a false labor and then “adopting” a special toy or even another animal to be her surrogate puppy.

How Long Does Pregnancy Last?

Compared to the 40 weeks or so it takes to produce a full-term human baby, canine gestation is relatively short with pregnancy lasting an average of 63 days or about nine weeks.

Some dog pregnancies may only last 58 days while others may reach 71 days, but any time in this range is considered normal.

Due to the relatively large heads and shoulders of the puppies compared to the narrow pelvis of the mother, most English Bulldogs will require a Caesarean section.

Most vets will schedule this ahead of time right around day 63. However, dogs don’t always follow our schedules and may go into labor before the surgery date.

Be on the lookout for:

Do not hesitate to call your vet the minute signs of labor are first noted.