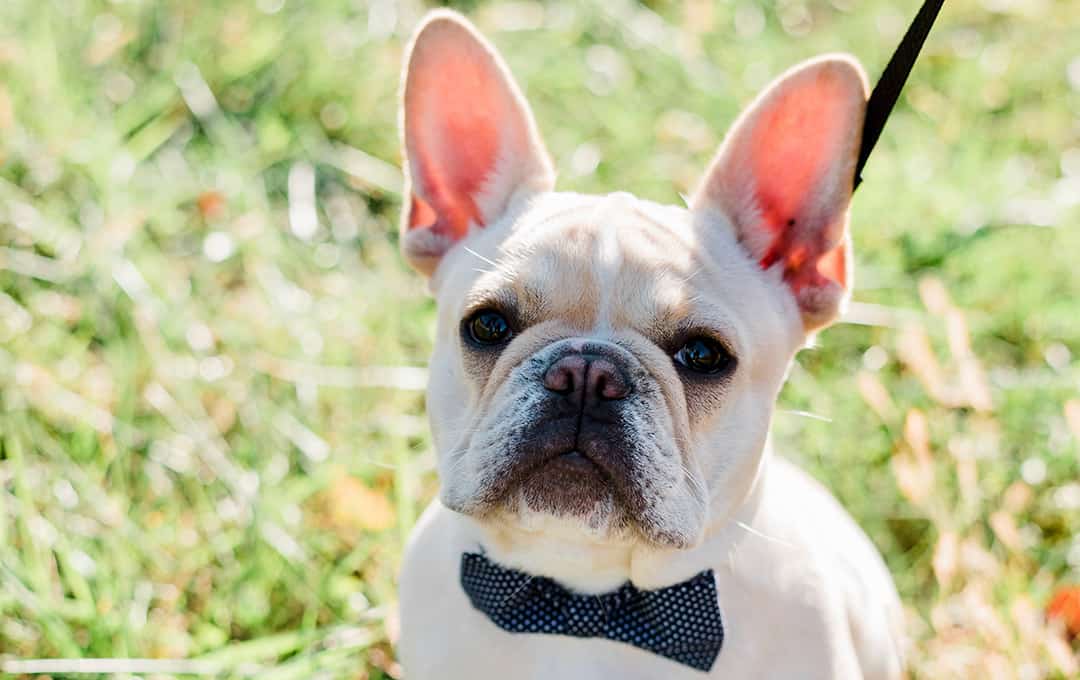 If you’re wanting a French Bulldog, you’re certainly not alone. They are easily one of the most popular breeds these days.

Whether you know the breed well or you’re still doing your research, you’ll definitely come away with some insightful information and a smile on your face after this one. And with that… take it away, Jackson! 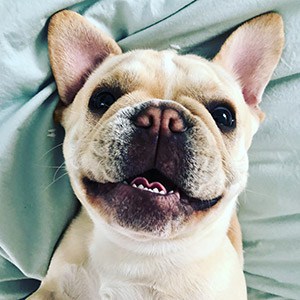 Meet Jackson! Such a stud, right? He’s a 2-year-old Fawn French Bulldog, weighs in at 26 lbs, and is a professional neighborhood watchdog. Oh, and one of his favorite sleeping spots is his cozy cave.

What breeder did you get Jackson from? Would you recommend them?

He came from Fantasia French Bulldogs in Pottstown, Pennsylvania. Shannon came highly recommended to me, and yes I would definitely recommend her as she truly believes in quality AKC-standard breeding.

What made you decide on a French Bulldog? Were you considering any other breeds?

At the time, my now-husband, Patrick and I were living in a 1 bedroom apartment in Jersey City, so we knew we wanted a small/medium size dog that didn’t need a ton of exercise, didn’t shed too much, and wouldn’t bark a lot. French bulldogs kept coming up when I searched for best apartment dogs. I had also seen a few in our building, and the more I saw their squishy faces, and talked to the owners about them, the more I started to realize they were ideal for us. Once I dove into my research on them, I didn’t consider any other breed.

How much did they cost?

Jackson cost us $4,500. His dad was a grand champion and both parents were both clear of a number of health issues. Jackson is AKC registered as well.

How would you explain his shedding habits? Is there anything you do to make shedding more manageable?

He doesn’t shed much on a daily basis but seems to do quite a bit come spring. Since he’s manageable on a regular basis, we don’t do much, other than brush him out every once in a while.

How would you describe his exercise needs? What does daily exercise look like for Jackson?

It all depends on the weather. Mostly, he goes for about 1.5 to 2 miles a day amongst several walks. On days when the weather is bad, whether it’s 110 heat index or freezing temps with 3 feet of snow on the ground, we’ll walk to the end of our block and back, along with pee breaks in the front yard, then back inside. On those days it’s tug-of-war time and running in the house fetching toys to get exercise. On cool and crisp fall days we usually go for one 2-mile walk along with several other shorter walks. 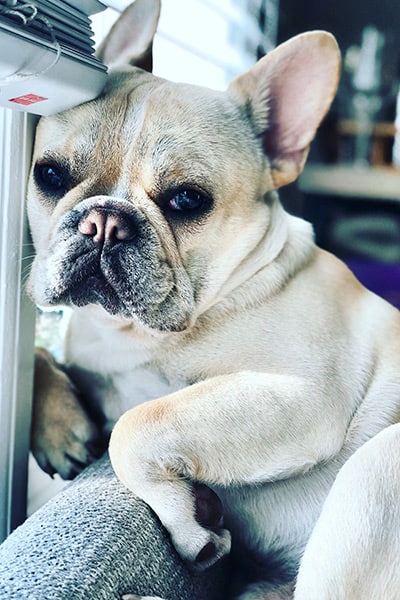 What are some of his favorite things to do?

Jackson’s favorite things to do include snuggling, eating, playing, and looking out the window. He’s allowed on our couch (thank goodness for covers) which is set at the window overlooking our street.

I call him Pawficer Jackson because he watches what everyone is doing, birds and squirrels included. I like to think he’s keeping an eye on the neighborhood to make sure everything and everyone is safe. A lot of the times the neighborhood kids will see him and wave hello. Snuggling on me while he’s napping and we’re watching TV is another favorite of his.

Is he good with kids and other dogs?

Yes, Jackson is good with kids, even if they pull at his ears or neck rolls, or see what he’s doing when eating. When we first got him, we did all of that to make sure he wouldn’t be reactive. He does sometimes try to dominate them, much to our dismay and embarrassment.

As far as other dogs go, he’s super submissive and will go belly up if he’s unsure of a new dog. He also likes to chase whatever dog has the ball or stick. He never wants the actual object, just enjoys the chase.

Another nickname of mine for him is, the referee, when we go to the dog park. If there are two dogs playing together, Jackson will continuously and playfully bark at them. It seems like he’s saying, “Hey, what about me? Don’t you guys wanna play with me?”.

Jackson’s funniest habit is how he sleeps. Since he’s allowed on the couch and likes looking out the window, there will be times when he’s like “okay, neighborhood watch done for now,” and then he ever so slowly flops over backward and falls asleep like that. Could be slightly against the window or laying fully on his back, but it makes me chuckle every single time he does it.

What are some of his favorite toys?

Jackson has other toys from PetCo and Kong that are fun and durable, at least for him. He’s never ripped up a toy and still has the same stuffed dragon I got him (from PetCo) when we brought him home at 9 weeks old.

What are his favorite clothing items or accessories?

Collar or Harness for walking?

Harness all the way. We have one by Frenchie Bulldog and also one by Pawtitas (purchased off Amazon).

What grooming supplies do you use?

Full disclosure, I’ve used the snout soother on my nose and it works so well. I was fighting off a cold and my nose was sore from blowing my nose so much and it helped so much. 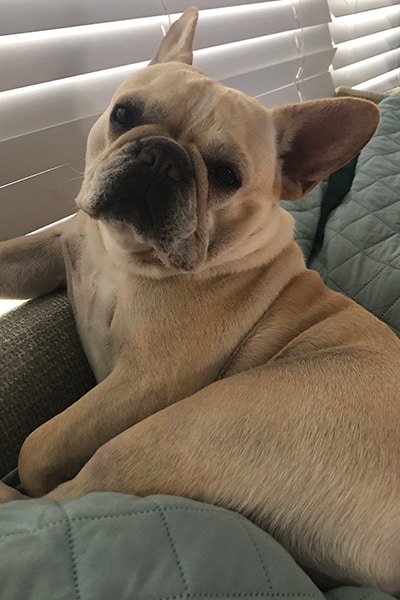 What kind of crate does Jackson have?

He has a 22″ wide Midwest iCrate with a bed that is always left open. He has his own room so the crate is there to go in if he chooses. Most times though he’s in his cozy cave. And a night, he typically sleeps in bed with Patrick and I.

What kind of food does he eat? Does he take any supplements?

Jackson eats adult Royal Canin mixed with The Farmer’s Dog fresh food. He also enjoys blueberries, strawberries, and bananas – whatever is in the house and dog-friendly. I literally feed into this bad habit. Sorry, not sorry.

Do you use any apps or technology to make life easier?

When we first moved to the suburbs we did use Wag! and loved how we could see exactly where Jackson took his daily walks. Long story short, we use someone else now, but having that technology was pretty cool and useful.

When using any dog app, meet the person first and make sure you and your pup are comfortable with one another.

As for a camera, we do have one in his room that we can check in on him when we’re not home. This was another Amazon purchase and the brand is Amcrest. You can listen in and also speak to him, but we don’t do that anymore. I did it once when he managed to escape through the gate and then saw him looking for me, and felt so bad because I wasn’t going to be home for hours. It’s such a nice thing to have to see what he’s doing (98% of the time he’s asleep) when we’re not with him.

Has he ever flown on a plane?

No, Jackson has never flown on a plane.

Does he have any health issues or limitations?

Jackson had two minor health issues, that fortunately didn’t result in anything worse. So other than seasonal allergies, he is a healthy pup, which we’re super thankful for. 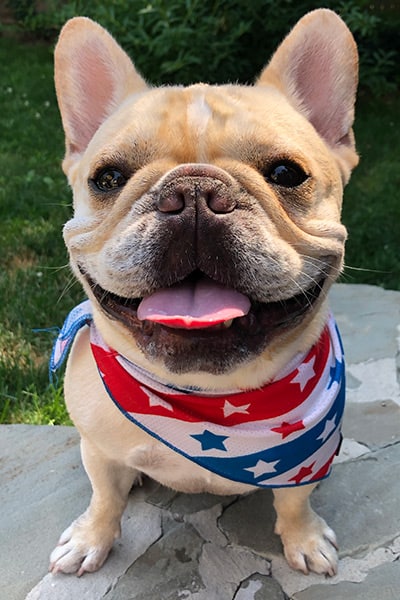 Knowing what you know now, what advice would you give to someone considering a French Bulldog?

If you are considering a French bulldog, take into account everything known about the breed in regards to temperament, exercise needs, possible health issues, and more [We’ve covered French Bulldogs extensively — learn more about them here].

Yes, they are super cute, but here’s the question you need to ask yourself: “is this breed a good fit for your lifestyle and home surroundings?”. If they do make for a good breed for you and/or your family, then consider the next two options:

Reach out to owners and ask where they got their pups from, including any Frenchies you might follow on Instagram. That’s how I got my information.

Do some more research. Be prepared to wait and pay for quality. The breeders you want will only do a few litters a year and may already have waiting lists. Whatever you do, do NOT go onto Craigslist or go through any other site that has puppies listed for free or super cheap. These are puppy mills which basically means greedy/heartless/evil people who only do it for the money and/or have no regard for the well-being of dogs.

Another important thing to consider if you’re looking into a French Bulldog is financials. This really goes for any dog breed, but since this breed can have serious health issues, make sure you have more than enough saved and set aside just for them. A few checkups a year can cost several hundred dollars, let alone, and God forbid, if anything serious happens.

That said, be sure to get pet insurance. Do your homework on this one too, as there are a number of companies and plans to go with.

After putting careful thought into all the above, what you can expect from a French Bulldog that I read somewhere is that they are a clown in the cloak of a philosopher. Frenchies have some of the silliest personalities I’ve ever seen in dogs and have some funny quirks, like sitting back on their butt, back legs in front of them like a person. Then on the other hand, sometimes when I look at Jackson I feel such a soul thinking about his surroundings and taking it all in.

Yes, Frenchies can be stubborn and mischievous at times, but the pure and honest love that they give you, and not to mention laughs, makes all of the trouble they get into and stinky farts they let out worth it. Jackson is my first Frenchie, but he certainly won’t be my last.