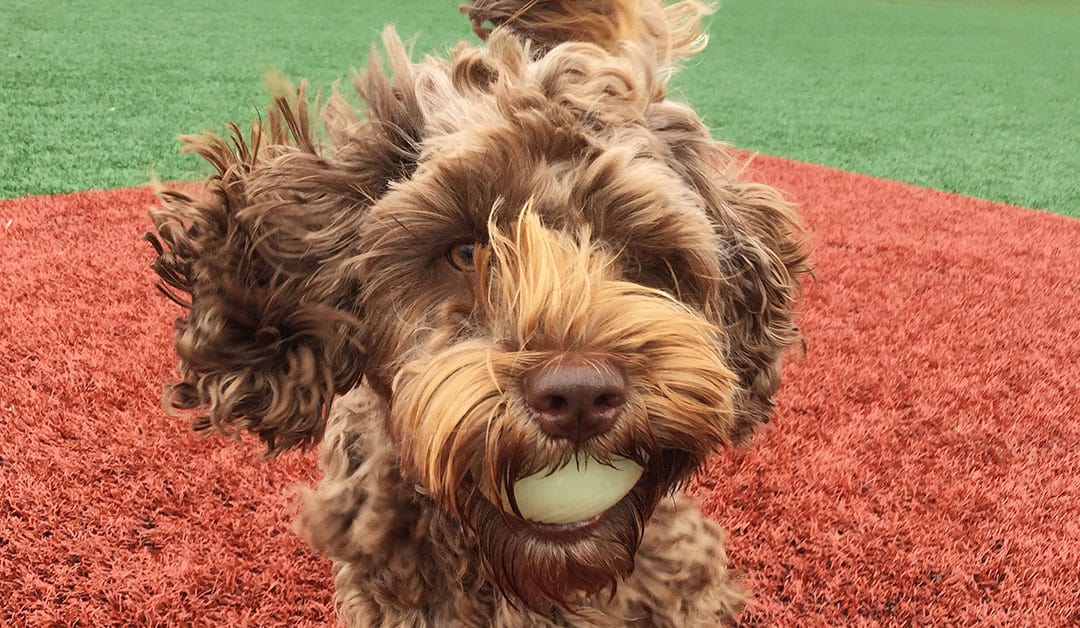 I know when we were considering a Labradoodle, we found it really helpful to pull info from the experiences of others. The problem is, sometimes it can be tough to find something that really paints the picture of the breed well — especially from an owner’s perspective.

We reached out to Anna and asked if she’d share some of her story with her amazing Labradoodle pup, Spooner. So, here it is! Enjoy! 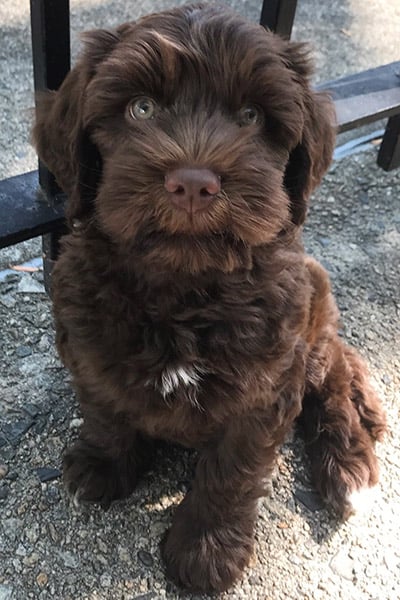 How big is he?

He’s a little guy, about 31 pounds. His mom is a Medium Labradoodle and dad is a Mini Labradoodle, so he’s a mix of the two!

What kind of coat does he have?

His hair is considered wavy but has gotten curlier as he’s gotten older! He was dark brown as a puppy and is now a silvery/light brown. His snout is almost bleach blonde from being in the sun so much this summer! Their coats definitely change as they get older.

What breeder did you get Spooner from? Would you recommend them to friends and family?

We got Spooner from Ocean State Labradoodles in Rhode Island. I would 100% recommend them!

They were absolutely wonderful every step of the way and I am still in close contact with them! They are a breeder who truly cares about dogs and is passionate about what they do. I think her dogs are simply the best. Spooner was everything we hoped and more! He also had a perfectly clean bill of health and absolutely no inbreeding which is really important when choosing a breeder.

What made you decide on an Australian Labradoodle? Were you considering any other breeds?

I was pretty dead set on a Labradoodle. I would always see them in the city (and stalk them on Instagram!) and I just loved how silly and fun-loving they seemed, while also being so intuitive and smart.

We filled out an application and got a call from the breeder saying there was one puppy left. They asked if we wanted him, and if not she would advertise that there was one more. We instantly said yes!

My fiancé and I had just bought a house and realized we would be moving in and getting a puppy on the same day which was crazy but SO worth it. Spooner fit right into our little family and has truly made us SO happy. He’s TRULY the best dog!

How much did Spooner cost?

Spooner cost around $3,000. He was worth every penny! There are so many dogs out there that need to be rescued so we may rescue our next pup, but we wouldn’t trade Spooner for the world.

How would you explain his shedding habits?

Since Spooner is a multi-gen (meaning he comes from a long line of Labradoodles – more on multi-gen Labradoodles here), he doesn’t shed at all! It’s our first dog ever that doesn’t shed so it’s pretty exciting for us! He is completely hypo-allergenic.

Does he like to swim? What’s been his experience with water? How’d you introduce him?

Spooner was afraid to swim at first but this summer he’s really grown to love it! Last year, we had to coax him into the water with his ball, but he was still afraid of the waves. We are so proud of the swimmer he’s become! He LOVES the water now. It’s been a really great way for him to get exercise this summer since it’s been so hot! I would recommend introducing them slowly and throwing the ball in the water for them to ease them in.

How would you describe his exercise needs? What does daily exercise look like for Spooner?

Labradoodles need a lot of exercise. My fiancé and I are lucky because our schedules are really flexible (especially in the summer since I’m a teacher). We are able to take him to the beach or for hikes and trips regularly. We’ve been going to the beach almost every day this summer because Spooner does NOT like being in the heat. He gets tons of exercise swimming and chasing the ball at the beach.

I definitely recommend that anyone getting a Labradoodle ensures they can provide the exercise that’s needed. Spooner could go ALL day! The ball makes exercise easier because he will chase it forever! We live on Boston Harbor and can take him off-leash on the harbor walk. If we’re staying in the city, we do this about 3-4 times a day and it gives him a ton of exercise!

What are some of his favorite things to do?

BALL! He is super obsessed with his orange ball. He could play fetch with it literally all day. It’s great because he gets so much exercise chasing it for hours! He also loves to be with his people and to socialize. He’s a little shy at first but after he meets you once he remembers you forever.

He loves his dog friends too, especially his BFF — a big Golden-mix named Bucky. He also loves the beach and simply being outside. He gets SO excited when we get to the beach and he could stay outside there all day.

Oh, man. Spooner has so many…

What are his FAVORITE toys?

Spooner has many favorites..but all are basically stuffed animals.

His go-to is his stuffed Sun that Stefani from Ocean State Labradoodles gave us the day we picked him up. He prances all around with that daily.

He also loves his stuffed boxing glove, emoji, and really anything furry and cute that he can carry around.

Also his orange “Chuckit! ball”…that’s a huge one. He loves toys and when we’re tired he will dump out his toy bin and completely entertain himself.

He also LOVES my mittens. I actually had to get another pair because he really thinks they’re his. He will carry his mitten all around the house and put it in his bean bag (his bed!) and just cuddle with him.

What grooming tools and supplies do you use?

We brush his hair with a Furminator grooming brush (Amazon) every now and then. We also just use generic dog brushes to make his coat soft. I cut his hair with regular hair cutting scissors.

Does he get professionally groomed? If so, when was the first time and how often?

I have always cut his hair myself. I was nervous to take him to the groomer when he was young and I’ve just been doing it ever since.

Now that it’s summer in Boston and HOT, I try to cut his hair pretty short. People ask me all the time how I cut his hair and I wish I had a method to my madness…I basically just cut as much as I can while he’s still! Since his hair is so wavy/curly you can’t really tell when it’s uneven!

What crate do you use for him?

We don’t use a crate for Spooner because he’s fine on his own in the house. He was really easy to train, fortunately. We got him a bean bag chair that he’s obsessed with. When he’s bored he’ll hide his ball underneath it and flip it over. He also loves jumping onto the bean bag from the couch!

What does Spooner’s diet look like? What kind of food does he eat?

Spooner eats the Grain-Free, Grass-Fed Lamb & Lentil food from Castor and Pollux. We usually put fish oil on it. He’s not very food motivated dog so he usually grazes throughout the day depending on when he’s hungry instead of eating at sets times.

Do you use any apps or technology to make life easier? If so, which do you recommend?

We used a Nest camera in our house a couple of time when we would go out at night. We realized Spooner didn’t do too much while we weren’t at home but it was fun to watch him! Besides that, we haven’t used much technology with him.

Knowing what you know now, what advice would you give to someone considering a Labradoodle?

I could go on about Labradoodles all day. I think they are the smartest, most loving, and silly dogs out there. For someone considering a labradoodle, I would make sure that they have the time and commitment for the exercise and attention they need.

As I mentioned, we are fortunate to be able to give Spooner TONS of exercise and take him to awesome places. He LOVES the beach, hiking, and pretty much anything outdoors. This also helps with mental stimulation (here’s a great resource on Mental Stimulation). Labradoodles are very smart and they need more than just a walk!

Also lots of positive reinforcement! I think this is KEY for any dog but Spooner is so attuned to our emotions and he really thrives off of praise and love!