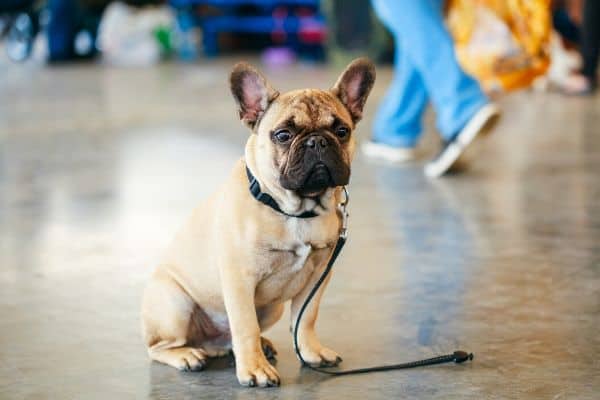 Are you contemplating flying with your Frenchie but concerned about possible restrictions you may have heard about regarding French Bulldogs? If so, you may want to get all the information possible about flying rules and regulations for Frenchies as early as possible.

They can only fly in the cabin area, but they must satisfy the airline’s requirements regarding carrier and weight restriction. There are still some airlines that allow them to fly in cargo but only a few.

Why Do They Have To Fly In The Cabin And Not In The Cargo Area?

French Bulldogs are a brachycephalic breed of dog, which are dogs with short faces or snub noses. These dogs often suffer from brachycephalic airway obstructive syndrome, which makes them literally struggle to breathe.

Brachycephalic dogs like Frenchies can have these difficulties in normal conditions, but they can get even worse at high altitudes in cargo holds where the temperatures can be extremely cold or extremely hot.

Many dogs that fell into this category were dying while in the airlines. The Department of Agriculture reported that between 2005 and 2011, 189 animals died on commercial flights, and of that number, more than half were brachycephalic breeds.

Because of the high number of deaths among this breed, many airlines have banned them from traveling in cargo. It doesn’t mean that they can’t fly. They just can’t fly in cargo. Keep in mind, that you will be required to pay for a “pet ticket” for your Frenchie to fly in cabin. The price will vary by location and airline.

What Kind of Carrier Do They Need To Be In For The Flight?

Frenchies that are flying in the cabin area of a plane must be in an approved carrier. It can be a crate or a carry-on container. It can also be a soft-sided or a hard-sided crate as long as it meets the airline’s size requirements.

They must be well ventilated, leak-proof and must be the type and size of carrier that will completely fit under the seat in front of the dog’s owner. The dog must also be able to stand up and move around freely in the carrier.

It’s worth remembering that most airlines have a weight restriction on the dog when it’s riding in the cabin. In most cases, the weight limit for dog and carrier is 20 pounds.

This can be problematic for Frenchies because they can be up to 28 pounds. Companies like Amazon offer Frenchie carriers, and they state if the carrier is an airline-approved carrier.

Any Size or Weight Restrictions For Carriers?

There are size and weight restrictions on airline carriers for Frenchies. The carrier must be able to easily fit under the seat. If it’s a hard-sided carrier, its dimensions can’t be more than 17.5”Lx12”Wx7.”H.

Airlines can vary slightly in their requirements. For instance, soft-sided carriers on the Boeing 737 MAX 9 aircraft cannot be taller than 10 inches.

It’s important for Frenchie owners to check with the airlines in which they wish to fly so they’re aware of the exact requirements. Keep in mind, also, that the 20-pound limit is for the dog AND the carrier.

Although you want you Frenchie’s carrier to be such that it meets the airline’s requirements, you also want one that will also make the dog as comfortable as possible.

What Are Some Things To Be Aware Of When They Fly? Health Issues?

What about your Frenchie’s physical health? A trip to the vet is definitely in order. You’ll want your Frenchie to have a complete physical to rule out any health issues.

You’ll also be required to provide the airlines with proof of the examination and proof that your Frenchie is current on all his or her vaccinations. The airlines will also require that you have the dog microchipped and tagged with identification in case something happens and the dog is lost. Frenchies are very delicate dogs and it’s not unusual for the dog to become nauseous or carsick when flying.

Avoid feeding the dog before flying, and do not give the dog any medication of any kind. You may be tempted to give him some sort of sedative to keep him calm.

Do not do this because the airline may have you sign a form stating that the dog was not sedated. This is the airline’s way of protecting themselves in case the dog does develop a serious health issue while flying.

Dogs, like humans, can suffer from ear popping, and it can be very uncomfortable for them. Unfortunately, there really isn’t anything you can do to prevent their ears from popping.

Their hearing is much more sensitive than ours is, and they’re going to feel the pressure at different altitudes. If possible, try to get your pup gradually accustomed to different altitudes prior to the day he’ll actually be flying. This won’t eliminate the ear-popping but can lessen the severity of it.

Tips For A Comfortable Flight

I’m not aware of any dogs that actually enjoy flying, but some do adjust after a while. Frenchie’s are very sensitive animals and will need lots of reassurance prior to the actual flight.

Get to the airport as early as possible so the dog has some time to just get used to the different surroundings. You’ll also want to take him for a walk to relax him and tire him out.

Give him something to drink but not too much. The more relaxed your dog is, the better it will be. Try to remain calm because he will pick up on your anxiety.

Any Special Precautions For Flying?

Hopefully, by the time the flight date has arrived, your Frenchie is used to and comfortable with the carrier. Crate training your Frenchie weeks before the actual flight can really reduce the stress and anxiety the dog feels.

Bring along some toys and treats for him during the trip. You want him as happy, relaxed and calm as possible. Do not bring extra towels or heavy blankets to put in the carrier.

These things can just make the dog hotter and can increase the risk of breathing difficulties.

What Is A Flight Nanny And How Can It Help With Travel?

A flight nanny is a professional usually hired through an airline company that assists pets on their flight from one destination to the next. They pick the animal up, along with all necessary food, water, documentation, and supplies, and stay with the animal until it’s safely delivered at its destination.

They’re experienced and highly educated on traveling with pets and know how to recognize health or behavior issues dogs may develop while flying.

Flight nannies can be very helpful to pet owners because of their expertise in this area and are able to stay with the dog throughout every step of the flight. While their services may be expensive, some pet owners feel they’re more than worth the cost.

French Bulldogs usually travel well in cars because they’re social animals that enjoy being with their owners. They’ll handle it even better if it’s something they’ve done since they were little puppies.

They may get carsick, so it’s important you not feed the dog if you know you plan to have him in your car. The less food in his stomach, the less chance of him being carsick and nauseous.

What size is a French Bulldog?

The French Bulldog is in the small breed dog group. They usually stand about 11 inches tall at the withers and weight around 28 pounds as adult dogs.

Do they make travel cages for Frenchies?

Yes, there are several travel cages made for Frenchies. While they may not be made specifically or exclusively for French Bulldogs, they airport-approved as travel crates.

If you’re planning to fly your Frenchie someplace, it’s important that you make sure the crate to intend to use is an airline-approved carrier.

There was a time when traveling with a pet in a car was unheard of much less flying them on a plane. With technology and the importance dogs now play in their owner’s lives, it’s being done every day.

If you’re planning to travel with your Frenchie, it can be the beginning of some wonderful times, especially if they’re flying for vacations and to pet-friendly destinations.