Labradoodles are such adorable, intelligent dogs that it’s understandable why so many people are choosing them as their family pets. Labradoodles are one of several “doodle” dogs, and each of them has its own attributes. How do you choose?

Choosing between a Labradoodle and other popular doodle breeds can be a difficult decision, especially if you’re going strictly by looks because they’re all so cute.

When we hear the words “doodle dogs”, we typically think of the Labradoodle because the Labradoodle was the first hybrid dog to come from combining a Poodle with the Labrador Retriever. However, people took notice and began breeding Poodles with other breeds, creating many new Doodle combinations.

Our goal is to highlight and compare some of the most popular Poodle-mix Doodle dogs to the Labradoodle. Keep in mind that these comparisons are generalizations — all pups are not created equal.

We’ll be comparing these 8 Doodle breeds to the Labradoodle:

Since all have Poodle in their blood, they’re all going to have some similarities, which typically makes choosing even harder. No surprise, but Labradoodle owners will tell you that it would take a lot to top their Labradoodle. However, Doodle dogs in general are among some of the most popular breeds for pets, service dogs, therapy dogs or just family pets.

While some people choose their dogs solely on appearance, others base it on the dog’s size, personality or other factors. Knowing a little more about each Poodle-mix dog can often make it easier to choose if you want a Labradoodle or one of the many other Doodle dogs.

Here is an overview of various types of Doodle dogs and how each of them compares to the ever-popular Labradoodle. 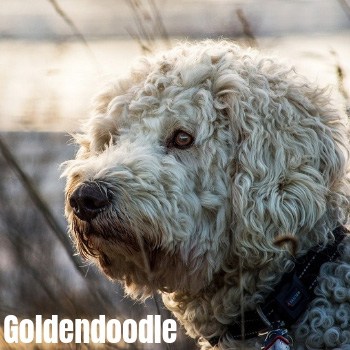 The Goldendoodle dog is a mix between a Miniature or Standard Poodle and a Golden Retriever. If mixed with a Miniature Poodle, their weight and height will be reduced.

Height Range: 18 to 24 inches at the shoulders

Goldendoodles were originally bred as a larger alternative to the popular Cockapoo. They’re friendly, loving dogs but tend to want a lot of attention from their owners and often suffer from separation anxiety when they’re left alone.

Goldendoodles and Labradoodles look so similar that many people (even Veterinarians) can’t tell their difference at first glance. They’re both very similar in size, coat and personality. The Labradoodle and Goldendoodle are both loving and playful dogs.

Differences between the Goldendoodle and Labradoodle: 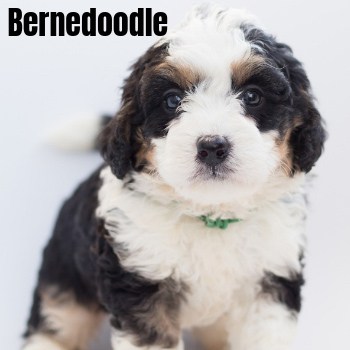 The Bernedoodle is the result of mixing a Poodle with a Bernese Mountain Dog. Their size can vary a lot depending on if the Bernese was mixed with a Toy, Mini or Standard Poodle.

Height Range: 10 to 29 inches at the shoulders

Because the Bernedoodle is a mixed breed, there can be a lot of variation in the litter. There has been a lot of inbreeding of these dogs throughout the years, which has resulted not just in health issues but also temperament problems.

Inexperienced breeders often have puppies that are skittish, hyperactive, stubborn or even slightly neurotic. Unfortunately, Bernedoodles are not the only hybrid dog that occasionally has these problems.

When you’re dealing with two different breeds, you can never know exactly what you’re going to get in a litter. Experienced breeders have the knowledge of genetics and know which sires and dams to mix but only have extensive research and breeding experience.

Although Bernedoodles are very cute dogs, it’s often been difficult to find a Bernedoodle that’s both attractive and with a calm personality. Here are some of the potential differences between Bernedoodles and Labradoodles.

Differences between the Bernedoodle and Labradoodle: 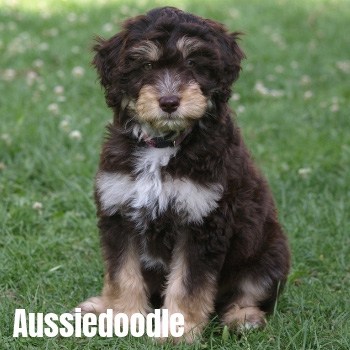 Height Range: 14 to 23 inches at the shoulders

Because of their intelligence, owners are advised to find jobs to keep the dog busy, whether it’s retrieving balls, pulling things around the yard or fun agility work. The Australian Shepherd has always been a herding dog. This trait makes the dog want to keep people together in a group.

They often try to do this with family members, particularly children, by nipping at their legs or bumping into them. What is often mistakenly considered as aggression is just them trying to herd.

Encouraging good behavior consistently at a young age can eliminate excessive herding tendencies with Aussiedoodles. They are also extremely loving and cuddly dogs. There are similarities and differences between Aussiedoodles and Labradoodles.

Differences between the Aussiedoodle and Labradoodle: 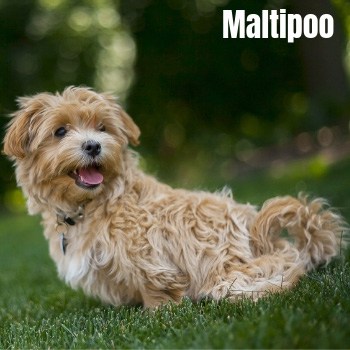 The Maltipoo is a hybrid, designer dog resulting from crossing a Poodle with a Maltese. Because the Poodle is usually either a toy or a miniature Poodle, the Maltipoo is not a really large dog.

Height Range: 8 to 14 inches at the shoulders

Maltipoos can be ideal dogs for first-time pet owners, but work even better for homes with older children or elderly people. They catch on to what you want very quickly, making them easy to train.

Maltipoos are very sensitive to their owner’s needs and wants. They need lots of exercise to avoid pent-up energy, which can result in chewing and damaging property. They differ from Labradoodles in a few ways.

Differences between the Maltipoo and Labradoodle: 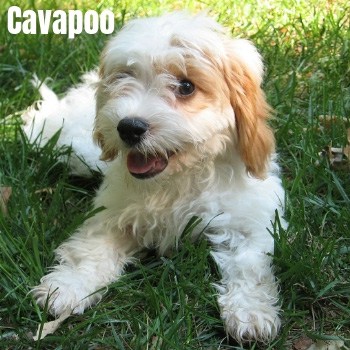 Also known as Cavoodle, the Cavapoo is a hybrid dog that comes from breeding a Poodle with a Cavalier King Charles Spaniel. Cavapoos are intelligent dogs with the potential to be very trainable. However, many would rather sit on their owner’s lap than learn to follow commands or perform tricks.

They are typically bred with Toy or Miniature Poodles, which puts them on the smaller side of Doodle dogs.

Height Range: 9 to 14 inches at the shoulders

They make good family dogs but do better in homes with older children. It’s not that they don’t like small children, but the dog’s small size makes them more susceptible to injuries from small children. Cavapoos are very energetic dogs that will chase a ball indefinitely if allowed. They also do well in agility and obedience competitions.

Differences between the Cavipoo and Labradoodle: 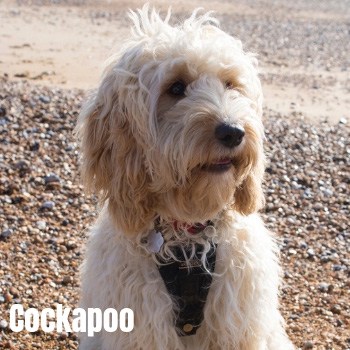 Cockapoos are a cross between a Cocker Spaniel and a Poodle or a mix of two Cockapoos bred together. They’re also referred to as Cockerpoos or Cockapoodles. If there is one word that could describe the Cockapoo’s coat it would be diverse. It might be scruffy and shaggy, or it might be very curly and have various colors and markings.

Height Range: 10 to 13 inches at the shoulders

Cockapoos have a wonderfully cheerful personality and love making their owners happy. They also find pleasure in the simplest things in life, whether it’s cuddling on their owner’s lap, running an agility course, playing the part of a therapy dog, or performing tricks to impress the family. They’re a lovable, happy dog that gets along with just about everyone, including people, other dogs and even cats.

Although they’re not known for being aggressive dogs, Cockapoos may do a lot of jumping, barking or even chewing on things when they’re bored or alone. There are a few differences between the Labradoodle and the Cockapoo.

Differences between the Cockapoo and Labradoodle: 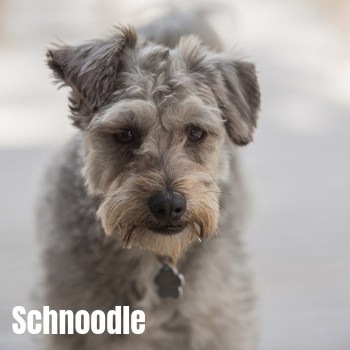 The Schnoodle is a small dog that’s a cross between a Poodle and a Miniature Schnauzer. They’re known for being funny, charming, smart and very alert dogs. Schnoodles make great companion and therapy dogs. They love “their people” and are perfectly content as lap dogs.

Height Range: 10 to 12 inches at the shoulders

Miniature Schnauzers tend to be quite protective of their home and their owners, so it’s important that they receive consistent training, socialization and discipline at an early age. In fact, Schnoodles need socialization more than anything else, and it should start as early as eight to ten weeks of age. Despite being such a small dog, Schnoodles are very sturdy.

The Poodles intelligence and willingness to please their own combined with the Schnauzer’s strength make a dog that does well in performance and competitions. The one thing that both the Labradoodle and Schnoodle have in common is that they’re both good for novice dog owners and are both kid-friendly dogs.

Differences between the Schnoodle and Labradoodle: 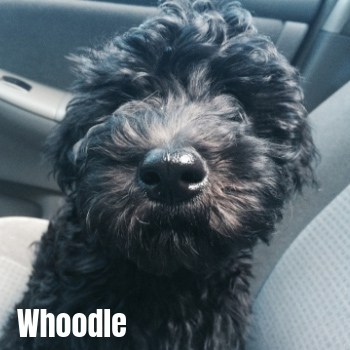 Also known as Sweatenpoo, the Whoodle is a cross between a Soft-Coated Wheaten Terrier and a Standard Poodle, although, they may be also be crossed with toy or miniature Poodles if the breeder prefers a smaller Whoodle. The Whoodle is a great family dog that gets along with people of all ages, whether they’re young children, active singles or elderly individuals.

Height Range: 12 to 20 inches at the shoulders

Because they’re very active and playful dogs, they enjoy a home with a large yard where they can run around and play. Due to their intelligence, they also require a lot of stimulation to prevent them from becoming bored, which can result in behavior problems. They can also have a stubborn streak from time to time, especially when asked to do something they don’t want to do.

The Whoodle is usually born with a dark coat that lightens as the dog ages. Like the Labradoodle, the Whoodle seldom barks and is a relatively quiet dog. Overheating in the summer is common, but they do very well in average and colder temperatures. Because of their terrier DNA, they have the prey drive and are not always trustworthy around cats.

Differences between the Whoodles and Labradoodle:

Doodle Dogs And Why They’re So Popular

What started out as one Labradoodle dog has evolved into many different breeds being mixed with Poodles to create a new kind of Doodle dog. Because Doodle dogs are basically mixed breed dogs that can’t be registered as purebreds, many people wonder why they’re so popular and have become so well-known and sought-after. Depending on who you ask, you’ll probably get the following answers.

We have two young child age 5 and 6 and are looking for a good family dog. We want a doodle dog but are unsure if we should get a puppy or an older doodle dog?

Consider the amount of time your family has each day to devote to the dog. Getting a puppy allows you more bonding time from a young age, but older dogs are more settled and also make excellent pets and family dogs.

We’ve heard that Doodle dogs are hypoallergenic, but there are so many Doodle dogs from which to choose – which Doodle dog would be best?

Paying attention to the parent’s hair can help you choose a dog with fewer allergens. Regular brushing and grooming can help a lot. The first Doodle dog ever, the Labradoodle, was created to help a blind woman and her allergy-affected husband. Labradoodles make excellent dogs for allergy sufferers.

Since all Doodle dogs are mixed breed dogs, why are many of them as expensive as purebred dogs?

Most doodle dogs shed very little, which makes them excellent options for dog lovers with allergies and worth the money. Although no dog is 100% hypoallergenic, as stated above, Doodle coats are as close as a dog will come to being hypoallergenic.

Additionally, doodle dogs are a mixture of Poodles and other dogs with excellent qualities. They often possess Poodle characteristics women love while also having a love of water, hunting and retrieving, which is what makes them popular with men as well.

One of the most important things to factor when choosing your dog is what you have to offer each other and what you hope to have in a dog. While everyone likes having people oohing and aahing over an adorable dog, it’s more important to choose the dog that will best meet your needs and those of your family. If that just happens to be a Labradoodle, consider yourself very lucky!