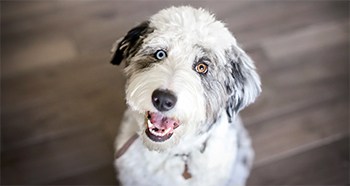 One of the first aspects that a family usually takes into consideration when comparing potential dog breeds is whether or not they shed. And if they do, how much fur can they expect to be cleaning up? If allergies are a concern, the topic of shedding might be at the top of the list.

So, does an Aussiedoodle shed? Like many Doodle breeds, Aussiedoodles are known for being a low-shed to no-shed breed. While you might find hair in the brush after a brushing session, you shouldn’t find clumps of hair everywhere.

An Aussiedoodle’s shedding is similar to how we as humans shed hair occasionally. The amount they actually ‘shed’ is so minimal that they’re commonly referred to as a “non-shedding” breed. Regardless, they are a very allergy-friendly breed.

The frequency of which the Aussiedoodle sheds depends on the coat that it inherits. You can further limit shedding by keeping your Aussiedoodle healthy and by regularly grooming them.

A few different factors affect just how much an Aussiedoodle sheds including their genetics (or their generation) and their coat type. We talk more about this below.

How Do Genetics Affect The Aussiedoodle’s Coat?

Similar to humans, the state of an Aussiedoodle’s coat depends on its parents and its lineage. An Aussiedoodle is bred from a Poodle and an Australian Shepard. As such, it’s important to look at the coat of both of these breeds. This will help the owner determine what the coat of their Aussiedoodle may be like.

Poodles typically have curly hair. It’s a single coat which means that it doesn’t blow out its coat during certain seasons. Blowing out refers to the process in which a dog sheds its coat. It does this to keep cool during the hotter months of the season. It’s also to help the dog rid itself of older hair and make way for new hair.

Because Poodles only have one coat, they don’t blow out as other dogs do. Poodles are typically considered to be hypoallergenic as well. Though this is debatable as no dog it truly hypoallergenic. An Aussiedoodle might inherit their coat primarily from the Poodle part of their genetic pool. If that’s the case, then the puppy might have curly hair.

An Aussiedoodle that favors its Shepherd side may have wavier hair than curly. This requires less grooming and trimming than curly hair.

Ultimately, the parents are responsible for what kind of coat and shedding activity an Aussiedoodle puppy has. Through carefully planned selective breeding, breeders are able to look at the traits of past litters and determine how to more accurately breed for the traits they desire.

In the case of Aussiedoodles (and other Doodles like the Labradoodle and Bernedoodle), breeders will take an F1 Aussiedoodle (F1 = First Generation = Poodle x Australian Shepherd) and breed it back with a Standard Poodle to create pups that shed even less than the original F1. This resulting litter is referred to as an F1b Aussiedoodle or the first ‘crossback’.

What Are The Different Aussiedoodle Coat Types?

Aussiedoodles have two types of coats–wavy and curly. The curls come from the Poodle side of their family. Curly hair typically requires more grooming than wavy hair.

This is because curly hair can become matted more easily. Those who have a curly-haired Aussiedoodle should brush their dog daily. This keeps the curls clean and doing what they do best–curling!

The wavy hair typically comes from the Australian Shepherd side of the genetic pool. It’s longer than the curls but also requires less grooming and brushing.

Owners should only have to brush their wavy-haired Aussiedoodles either once a week or once every two weeks depending on their dog’s activities.

Aussiedoodles possess a single coat. This limits the chances of blowing their coat out since they don’t have any undercoat that needs to push forth. The single coat is courtesy of their Poodle heritage.

This is Mera the Aussiedoodle at about 14 weeks old. Super cute, right? We reached out to Mera’s parents on Instagram and this is the exact brush they use (Amazon).

Want to see more of Mera? Check her out on Instagram.

Because they come from the Poodle, which is considered to be as close to a hypoallergenic dog as you can get, many wonder what that means for the Aussiedoodle. The simple answer is that they are not hypoallergenic (no dog truly is). It’d be more accurate to say they are ‘allergy-friendly’.

Because they have limited shedding, the Aussiedoodle is extremely allergy-friendly. They shed far less than other breeds and mixes of dogs.

Aussiedoodles that have curly hair shed even less than those with wavy hair. So, if allergies are something that plagues the family, then having a curly-haired Aussiedoodle may be an excellent choice.

Grooming can also help make Aussiedoodles further allergy-friendly. Pollen and dirt can collect on a dog’s hair over time. By giving them a regular wash, that pollen and dirt can be removed from their hair. One will likely also find that they shed far less if regularly groomed, too.

Do They Lose Or Blow Out Their Puppy Coat?

All dogs blow out their puppy coat. However, the Aussiedoodle does so with far less shedding than other dogs. Instead of large clumps of hair being strewn about the house, the Aussiedoodle may only shed a little here and there. It makes removing the hair easy. It also requires less vacuuming.

The important question that should really be asked is if they blow their coat again. They do not. Even though Australian Shepherds blow their coats throughout the year, Aussiedoodles do not.

The Poodle in their genetic pool gives them a single coat that doesn’t blow out according to the season. As such, families typically only see a small amount of shedding from their dog throughout the year.

How Can I Limit Shedding?

Typically, they should be taken to the groomers once every two to three months. Not only will this keep their shedding limited but it also reduces the chances of their hair matting.

Aussiedoodles who have wavy hair typically need less trimming. Owners should schedule them for the groomers once every three or four months. Obviously, Aussiedoodles who spend a lot of time outside may need to be groomed more often than those who are primarily inside. Being outside and prone to rolling in the dirt and grass can dirty up a dog faster than those who roll around on the carpet in the home.

Brushing is another excellent method of limiting how much your Aussiedoodle sheds. Curly-haired dogs should be brushed daily. It helps to prevent matting and keeps the hair clean and soft. Wavy-haired Aussiedoodles should also be brushed but with less frequency.

Once a week can work just as effectively as once every two weeks. Again, an owner may need to increase how often they brush their Aussiedoodle depending on how frequently they spend time outdoors.

Finally, Aussiedoodles should also be scrubbed and cleaned. Curly-haired coats should take baths once every week or once every two weeks. Wavy-haired coats can typically get away with once a month.

Do Aussiedoodles need to be brushed often?

Do Aussiedoodles mat easily like other Doodle dog breeds?

Aussiedoodles can mat easily if they are not groomed regularly. To prevent this matting, which can be unhealthy for the dog, owners should brush and trim their dog’s coats every two to three months. This is especially true in the case of curly-haired Aussiedoodles. Otherwise, matting will occur far more easily.