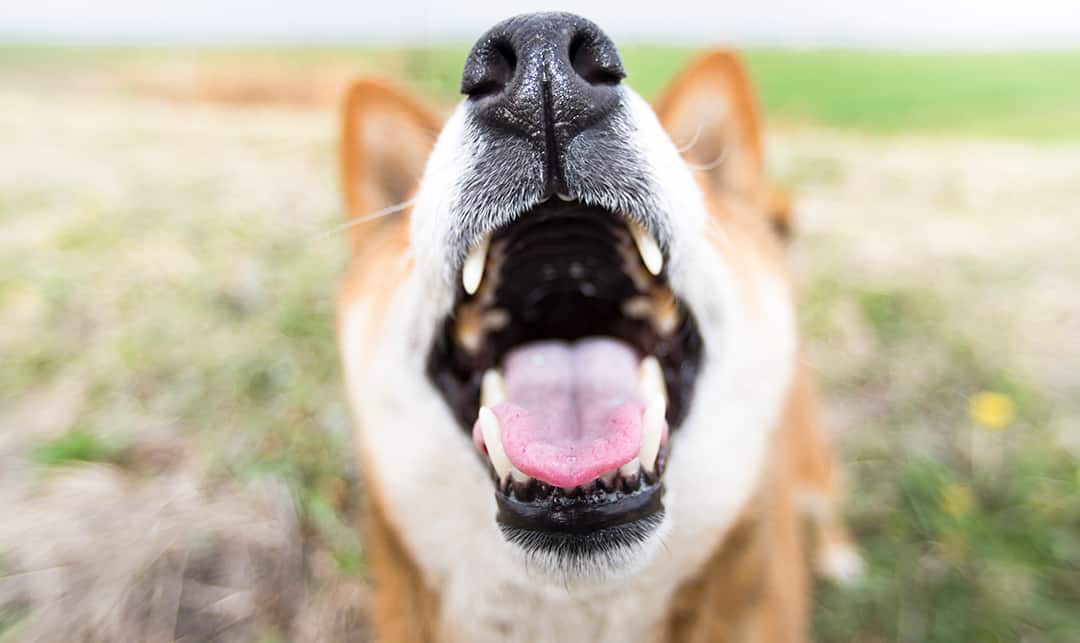 Shiba Inus are classified as a “basal” breed, meaning that they are closer to the original root of the family tree than most other breeds. Believed to be very closely related to wolves genetically, the Shiba Inu has retained many “primitive” traits such as strong prey drive, howling, resourcefulness, and the urge to roam.

Do Shiba Inu bark a lot? Shiba Inus are not usually excessive barkers. They will alert you to danger, however. One of the most vocally capable of breeds, they’re able to produce a wide variety of sounds such as howls, screams, growls, yawns, huffs and barks, but don’t do so very often.

On occasion, owners might have an issue with barking that needs to be corrected. The key is to understand what is triggering the behavior before attempting to correct it.

Why do dogs bark in general?  What is considered “excessive” and how do we correct this?

General Causes of Barking in Dogs

Shiba Inus, who are indeed capable of a vast range of vocalizations, do not generally bark all that much. Howl, whine, huff – yes. Gurgle, yodel, shriek – definitely. Moan, growl, loudly yawn – all the time. Oh and yes, the famous Shiba scream. Nuisance barking though, not so much.

Dogs do, however, bark for a wide variety of reasons, some of which are helpful such as alerting their family to the presence of danger. Sometimes, they seem to bark for reasons beyond understanding or simply to drive owners insane.

If you find yourself with a dog whose barking is becoming a problem, discovering why the dog is barking so much is the first step in resolving the issue. Once the root of the matter has been determined, correcting the behavior is often quite easy.

Let’s take a quick look at some of the most common causes of nuisance barking.

When a dog has not been introduced to a vast variety of situations, people, experiences, animals, and sounds, fear of the unfamiliar often materializes, resulting in a dog that feels the need to bark at anything and everything.

If your dog barks at every new sound, sight, smell, or situation he encounters, poor socialization is often to blame. He simply does not have the skills or confidence to behave appropriately when faced with a new experience. For more on proper socialization, check out our detailed guide, here.

Obviously, dogs are unable to express their needs, wants, and emotions with words. They do, however, desire to make these feelings known and sometimes use barking to get their point across.

To express, “Dinner is late and I am slowly wasting away. Did you forget me?” a dog will bark, sometimes repeatedly while standing over his empty bowl.

Other times a bark will mean, “There is a big, scary guy about to ring the doorbell. I really think you should know about this!”

Mental stimulation is important for dogs of any breed, perhaps even more so for intelligent Shiba Inus. Dogs are cognitive creatures who require frequent opportunities to stretch their mental capacities. When not presented with enough thought-provoking activities, smart dogs can become bored and resort to barking to help pass the time.

Loneliness is another common trigger of bouts of annoying barking. Though not common in Shiba Inu, who tend not to mind being alone, many breeds crave lots of human interaction and will make their displeasure at being left alone known by barking repeatedly.

Feelings of anxiety, indecision, and frustration can frequently lead to barking issues. For example, dogs will often bark with anxiety when they realize that their carefree road trip has suddenly come to an end at the veterinarian’s parking lot.

When faced with a difficult choice such as when the owner has a treat in one hand and throws a favorite toy with the other, a dog will often bark as he struggles to make up his mind as to which opportunity he desires more.

Frustration also often results in barking. Owners who are crate training a new puppy commonly deal with frustration barking. The new puppy is unhappy and frustrated at being separated from his family and does not hesitate to make his feelings known.

While the Shiba Inu is not bred to bark often, other breeds are and each dog is an individual.  Here is where knowledge of the parents are helpful.  Did your Shiba’s mother or father bark a lot?

The barking trait was intentionally bred into many working breeds of dogs, especially those used for hunting like those in the Terrier Group. These feisty dogs were bred to bark as a way of alerting their handler of their location which often happened to be underground as they rooted out prey.

Other breeds such as German shepherds were purposely bred to bark as part of their protective duties. However, any dog that is actively trying to protect his family or domain will bark. This instinctive trait is deeply rooted and is actually a desirable attribute.

Healthy dogs have lots of energy to use up every day. When not given any other means to expend that energy, dogs often release the pent up tension by, you guessed it – barking.

How to Discourage Excessive Barking

Shiba Inu can be timid, even fearful, of people and things that they are not accustomed to, and the result can be barking or even worse, aggression. Properly socializing your dog as soon as possible is critical to avoiding this behavior and should be continued for the rest of his life.

Socialization involves effort on your part but is well worth the results. A well-socialized dog can encounter new people, animals, and situations confidently and without fear and therefore not feel the need to bark at everything he sees. Don’t neglect this critical element if your goal is a happy, well adjusted Shiba Inu.

Training your Shiba Inu reinforces the notion that you are the leader and he is to follow your direction. Some individual dogs make take a bit longer than others to accept this fact, but be persistent and he will get the idea.

Shiba Inus respond much better to positive training methods that reward with food than forceful or aggressive methods.

When training him not to bark, the general idea is to ignore bad behavior and reward the good. Easy, right? Well, patience and consistency will definitely be necessary.

Try not to ever inadvertently reward nuisance barking. While it may be tempting to yell at him to be quiet, he will think that you are merely joining in the racket, or he may learn to fear you, which is even worse. You want his respect, not his fear.

Ignore the barking (do not even look at him) and reward your dog with a treat the instant he quiets down, and he will learn that barking earns him nothing, but being quiet earns him a treat.

While it may sound crazy, teaching your dog to “speak” on command first often makes teaching the “quiet” command easier. You see, the dog will bark when you ask him to, then quietly wait for the next command. During this quiet waiting,  give the “quiet” command and reward. Soon, he’ll learn to associate the word with being quiet.

Although they are not hyper dogs, Shiba Inus do require a good bit of daily exercise. Be sure that your dog is getting sufficient vigorous exercise each day so that he won’t be full of energy and ready to bark the night away. A tired Shiba Inu is usually a quiet Shiba Inu.

Are Shiba Inus hard to train?

Shiba Inus can be tricky to train due to their independent thinking, strong wills, and stubbornness. These traits can make training challenging, but certainly not impossible. Lots of time, patience, and consistency will be needed to effectively train a Shiba Inu.

Aggression can be an issue, especially towards other dogs. Shiba Inu tend to be possessive of their territory, food, toys, and family and will at times aggressively defend their “belongings.” However, dogs from reputable breeders who have been trained and well socialized should not be aggressive.