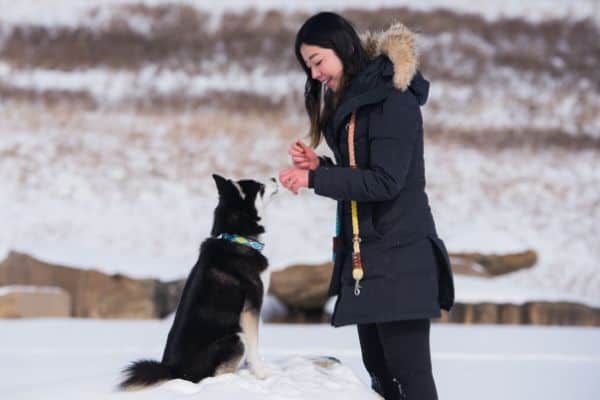 Pomeranian Huskies, more commonly called Pomskies, are undeniably adorable with their pointed ears, fluffy coat, and curled tail. Because they often closely resemble the Siberian Husky’s side of the family but remain relatively small at 20 – 30 pounds, they have become wildly popular with Husky lovers who wish for a smaller version.

Playful and energetic, Pomskies do well with active individuals and families who enjoy spending time outside. They are very intelligent and, with plenty of yummy treats and praise, can be trained to do a variety of tricks.

They usually get along quite well with other dogs and make friends easily with strangers. The fact that they are ideal for those living in apartments, small homes, or condos begs the question…

Do Pomskies bark a lot? Although Pomskies may inherit tendencies to vocalize from either parent breed, a comfortable, well-adjusted, properly trained and socialized Pomsky should not be prone to excessive barking. Corrective measures can usually stop nuisance barking behavior.

Much of what you read about Pomskies touts all of the Pomsky’s positive characteristics but leaves the possible noise level unaddressed. Let’s take a realistic look at how much or how little barking you can expect when sharing your life with a Pomsky.

Pomskies are one of the most recent additions to the list of crossbred, designer breeds. It’s nearly impossible to make a blanket statement as to their barking tendencies because two separate breeds contribute to the mix, and a Pomsky may take after either one or wind up somewhere in the middle.

So, let’s take a quick look at both of the parent breed’s barking habits.

Siberian Huskies are not usually big barkers. That is not to say that they are silent dogs. Quite the opposite actually. They are capable of producing a wide variety of noises when they see fit.

Their vocalizations include yipping, howling, whining, “singing,” “talking,” and everything in between.

Pomeranians are alert and protective by nature and won’t hesitate to sound the alarm if they pick up on anything amiss. Unfortunately, they have a reputation as being on the yappy side. Unless they are well trained, their high-pitched barks can become a nuisance quickly.

So, one parent breed rarely barks but produces a great variety of other vocalizations, and the other parent breed is rather notorious for bouts of excessive barking. What does this mean for their offspring, the Pomsky?

Well, it simply depends on which parent breed the Pomsky takes after more.

Broadly speaking, most Pomskies will not be nuisance barkers as long as they have been well socialized, correctly trained, and receive plenty of daily exercise and mental stimulation.

Dogs bark for many reasons. Some are obvious, like when he joyfully barks at your arrival home, his favorite toy is stuck under the couch, or when the doorbell rings. At other times, the reasons may not be quite as apparent. Some common triggers include:

You know your Pomsky better than anyone. Take the time to observe him closely to identify and rectify the trigger that’s causing him to bark. You might just be surprised by what you learn.

Dealing With a Barking Pomsky

It’s important to note that barking is a natural behavior for dogs and is one of the ways that they communicate with us. There is, however, a big difference between acceptable or desired barking (e.g., you want your Pomsky to bark to ward off an intruder) and nuisance barking.

Here are some tips for dealing with annoying, repetitive barking.

Breaking the barking habit will require a good deal of self-control and patience on your part. That means no yelling at the dog even when he’s kept you and the neighborhood up half the night. If you yell, he’ll likely think you are joining in the game and will be more encouraged to continue the behavior.

The basic rule to deal with barking is to ignore the bad behavior and reward the good. Ignore all that incessant noise? Yep. See what we mean about self-control?

The instant that there is a pause in the barking, say, “Quiet,” and give him a treat. When the barking resumes, ignore it again and wait for him to pause. Give the command and reward immediately. Eventually, he’ll get the idea that quiet is rewarded and barking earns him nothing.

Because excessive, unused energy and boredom are often to blame for unnecessary barking, boosting your Pomsky’s amount and intensity of daily exercise and providing stimulating puzzle toys may be enough to stop the problem barking.

Remember, a tired, satisfied Pomsky is usually a quiet Pomsky.

Other Behavior Problems/Quirks With Pomskies

One issue that all Pomsky owners should be aware of is a high prey drive. Many Pomskies just can’t resist chasing after any small furry creature who happens to be in their line of sight. For this reason, Pomskies should be kept on a leash whenever out in public for their own safety.

Some Pomskies can be a bit stubborn if what you are suggesting they do doesn’t fit with their agenda. Don’t lose hope though. Even the most headstrong and opinionated Pomskies will usually come around to your way of thinking with time, patience, and positive reinforcements.

Pomskies are quite athletic and excel at both digging and jumping, a combination that makes them proficient escape artists. Extra care and precautions should be taken before letting a Pomsky out to play in the yard unsupervised.

A fun Pomsky quirk is that due to their sled dog heritage, many Pomskies simply adore the snow and will happily spend hours tunneling through drifts and kicking up sprays of the wondrous white stuff as they dash around the yard with sheer joy.

Yes. Howling is a common vocalization among Siberian Huskies, so don’t be too surprised if your Pomsky responds to sirens, music, or long, quiet nights with an eerie, mournful howl.

Howling is one way a dog communicates with other canines to identify himself or indicate his location, but many believe that it is sometimes used to express loneliness as well.

To test this theory, try spending more quality time with your Pomsky and arrange for him to regularly meet some four-legged friends for playtime, and see if the howling episodes cease entirely.

Did you know? A dog’s howl is totally unique to them and can be heard for miles away. Dogs can differentiate who’s who simply by the individual pitches and tones of a howl.