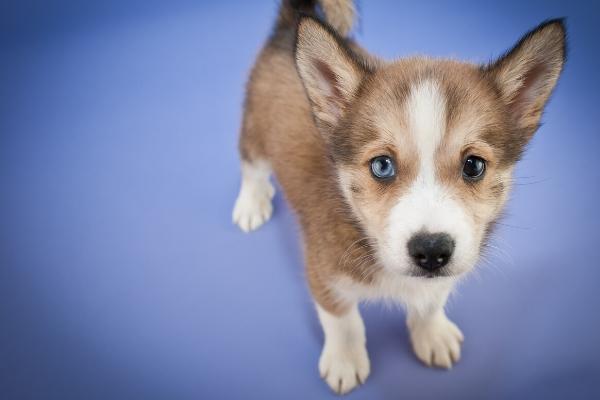 Pomskies are rapidly trending in the world of designer breeds and with good reason. Interestingly, Pomskies were gaining attention before they were ever actually created.

Thanks to a viral picture of a Finnish Lapphund puppy that was mislabeled as a Pomsky, the idea of breeding a Siberian Husky to a Pomeranian was hatched.

Once the first litter of Pomskies was born in 2012, the demand for these cute little guys skyrocketed and continues to today. What makes them so popular? Well, considering that they’re playful, loving, smart, confident, active, and inquisitive, the answer is clear.

It doesn’t hurt that they resemble Huskies but don’t require nearly as much room. Did we mention that they’re positively adorable too?

How much does a Pomsky cost?

The price for a Pomsky can vary a great deal depending on several factors including markings, eye color, size, pedigree, and quality. It can range from as little as $500 to more than $5,000.

As you continue reading, you’ll learn why Pomsky prices vary so much and gain some valuable tips for when you’re ready to start looking for a Pomsky of your own.

Sure, with a quick search, you can probably find puppies priced to move quickly. Will they be top quality and come with health guarantees? Probably not.

If you keep looking, you’ll find puppies on the opposite end of the price spectrum too. Do you really need a show or breeding quality pup? Probably not.

For an affectionate, energetic family companion, your best bet will be to look at reasonably priced Pomskies from reputable, well-established breeders. We took the liberty of finding some for you so you can get a good idea of actual, real-world Pomsky prices.

All of the breeders listed perform health and genetic testing on their dogs prior to breeding and raise their dogs indoors as part of the family to jump start the socialization process.

Here’s our complete list of Pomsky breeders across the US, including those who ship puppies.

What Impacts the Price of a Pomsky Puppy?

Rather, there’s greater demand for certain markings and the breeders feel justified in charging more for these characteristics. That’s supply and demand in action for ya.

More often than not, the smaller the puppy is predicted to be as an adult, the higher the price will be. Smaller Pomskies are in high demand, so, as with those showing ideal markings and eye color, they usually come with a higher price tag.

Breeding Pomskies is an expensive endeavor. In addition to routine health screenings and genetic tests for parent dogs, breeders must also pay for artificial insemination along with its associated blood tests.

If the resulting litter contains fewer puppies than were expected, breeders are forced to raise the puppies’ price in order to cover their own costs.

The pedigrees of the parent dogs can also affect the price of puppies. If multiple winnings in the show ring appear on either parent’s pedigree, you can expect to see that reflected in the puppies’ price tags.

Pomskies who are F1 generation, the product of a purebred female Siberian Husky and a purebred Pomeranian male, tend to cost less than puppies resulting from two Pomskies (F2) or backcrosses of a Pomsky to an original parent breed (F1B).

F1B and F2 generation puppies take much more time and effort to produce, so the higher price is indeed justifiable.

The location of the breeder may also impact the price of a Pomsky puppy. Though not a hard and fast rule, breeders in rural areas generally charge less for their puppies than breeders in large cities do.

Breeders in or near big metropolitan areas simply have a greater number of people to market their puppies to and thus can charge more.

The quality and reputation of the Pomsky breeder can be big factors when it comes to puppy pricing. Those who have spent years working towards solidifying breed standards and producing the healthiest, highest quality pups can and should charge more than an inexperienced backyard breeder.

Because these designer dogs are in such high demand, breeders seem to have popped up everywhere recently. Do they all have the breed’s best interests in mind?

Sadly, no. When searching for a Pomsky breeder, you’ll definitely need to know what to look for.

What to Look For

1. A quality Pomsky breeder should have both Siberian Huskies and Pomeranians.

After all, that’s what it takes to produce Pomskies, right?

The only exception might be if the breeder purchases Pomeranian semen from a stud service. If this is the case, the breeder should be willing to show you documentation and photos of the litter’s sire.

Expect them to pepper you with questions about your family life, finances, and experience with dogs.

They aren’t just being nosy; they’re determining if you’d be able to provide a proper, stable home for the puppy.

3. All of a breeder’s dogs should appear happy and healthy and be kept indoors in a clean, odor-free area.

Good breeders should gladly let you meet the parent dogs and see where the puppies live. All of the dogs present should be friendly and should not display any fear of humans.

4. Responsible Pomsky breeders will provide lots of information about Pomskies.

From general to information on health issues, routine vaccinations and deworming, and basic puppy care. They should take the time to answer your questions and give you their contact information should problems arise down the road.

5. Proof of health screenings and genetic testing for the parent dogs should be shown upon request.

Most breeders will also present you with a contract to sign showing a record of care that the breeder has given the puppy and a list of your responsibilities as the new owner.

6. A clause stating that you agree to spay or neuter the puppy by a certain age is fairly standard.

There are numerous warning signs that a breeder is less than ideal. Spotting one or more of the following red flags is a good indication that you should look elsewhere.

Don’t be disappointed if the first few breeders you meet don’t live up to your expectations. Purchasing a Pomsky is a big step, and you want to be sure that your puppy’s breeder has done everything they can to give your pup a great start in life. Don’t settle for less.

There are plenty of reputable breeders out there. Check with the Pomsky Club of America, the International Pomsky Association, and the Pomsky Owner Association for lists of breeders who adhere to strict guidelines and truly care about Pomskies.

Can I Adopt a Pomsky Puppy?

Because Pomskies are still so new, finding one to adopt may require some extra digging. Your local animal shelter, Petfinder, and Adopt-a-Pet.com are all good places to start. Pomsky groups on Facebook and other social media are great sources too. Rescue organizations for Siberian Huskies or Pomeranians sometimes run across Pomskies as well. Here are a couple to get you started:

Note: When looking to adopt a Pomsky, know that many breeders now list their litters as being “up for adoption” instead of “for sale” in order to make purchasing a puppy seem less like a business transaction.