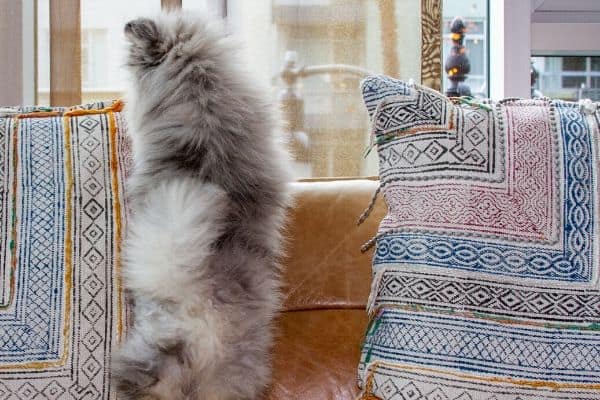 Of course, it would be nice if you never had to leave your dog behind, but for most people, this isn’t the reality. Jobs, children, and hectic schedules all compete for our time and attention.

For dog owners, finding a balance between keeping our dogs happy and fulfilling our daily responsibilities can be a constant struggle.

Some dog breeds like Basset Hounds and Chow Chows are usually content to lounge around for large portions of the day and don’t seem to mind all that much when they’re left alone for hours.

Other breeds like Vizslas and French Bulldogs tend to be more clingy and prefer to be by your side at all times. So, what about the ever-so-popular Pomsky? Let’s find out.

Do Pomskies do well home alone? Pomskies can do quite well home alone if they are well trained and exercised beforehand. For best results, gradually get them used to being alone a little at a time.

If their social, physical, and emotional needs are not met, naughty behavior may result.

If the thought of leaving your Pomsky home alone breaks your heart, you’re not alone. How long is too long and what can you do to ease the transition for your little buddy?

Keep reading to learn the answers to these common concerns and more.

How Long Can I Leave a Pomsky Home Alone?

The answer here is dependent on several components such as age and maturity level, amount of training, individual temperament, and overall confidence of the dog in question. Generally though, Pomskies who are well trained, sufficiently exercised and mentally stimulated regularly can be acclimated to being alone for about 8 hours.

Let’s examine some common factors that will influence how long a dog can be left alone and how well they’ll handle it.

Pomskies who are completely housebroken, thoroughly trained in house rules, and are provided with plenty of physical and mental exercise shouldn’t have much trouble being left alone as long as they’re allowed to adjust over time.

Of course, some Pomskies won’t do as well as others and will need some additional time and training to get used to the idea, but many Pomskies will have no issues at all.

The key to success is to make the process a gradual one. Begin by leaving for just a few minutes at a time. With each successive trip, increase the time that he’s left alone. Soon, being left alone will be an ordinary occurrence and you can head off to work worry-free.

Tip: Many owners recommend getting a wifi camera (I use this one) so you can make periodic check-ins on your pup while you’re away. This is especially comforting when you begin the process of leaving them for longer amounts of time.

Puppies are another matter entirely. Due to their immature, small excretory systems, they need to answer nature’s call much more frequently than adult dogs do and can’t be left alone for very long.

The basic rule for a puppy’s ability to “hold it” is 1 hour per month of age. So, for example, a 4-month-old pup can only be expected to go for 4 hours between potty breaks.

Expecting a young puppy to not have any accidents when left alone for long periods is both unrealistic and unfair to the dog. If you must be gone for hours at a time, arrangements should be made with a friend or family member to swing by your house and take the puppy outside.

Keep in mind that frequent human interaction is a critical part of the socialization process. Spending the majority of their time by themselves can be detrimental to the puppy’s mental development and behavior.

The amount and quality of training a Pomsky has had plays a major role when it comes to being left alone. Potty training, rules such as no eating the furniture or barking for hours on end, and basic commands should be firmly established before you attempt to leave your Pomsky for an extended period.

Pomskies who take after their Siberian Husky moms may have some difficulty adjusting to being left alone. Huskies, by nature, have a pack mentality and much prefer to be in constant contact with other pack members (you and your family).

On the other hand, Pomskies who take after their Pomeranian dads may be more independent and quickly adjust to being king of the castle while you’re gone.

Most Pomskies, though, will fall somewhere in the middle of their parent breed’s temperaments. It all really depends on your individual dog.

Both Siberian Huskies and Pomeranians are intelligent, active dogs, so the same can be expected for Pomskies. Those who enjoy lots of daily exercise and are routinely stimulated mentally will typically feel satisfied and relaxed enough to behave well when left alone.

Pomskies with loads of energy or who are bored from a lack of mental stimulation will frequently find their own ways to entertain themselves and burn off that extra energy. Their human companions are usually quite displeased when they return home to find belongings destroyed and their house in shambles.

Any dog lacking in confidence or unsure of where he stands in the family hierarchy will likely be fearful and miserable when he finds himself all alone at home.

Conversely, dogs who have been well socialized and are therefore confident in many situations and are certain of their rank in the family will typically adjust much easier to being left behind.

How Many Hours Is Too Many?

Experts agree that anything over 8 hours is too much for an adult dog. If your Pomsky tends to be nervous or destructive when left for an extended period, his maximum time limit might be significantly less.

Your dog will let you know when you’ve left him alone for too long. Other than obvious signs like having an accident, be on the lookout for drastic changes in behavior.

Even if you must be gone for up to 8 hours a day, it’s best if you can pop in at home during your break to spend some time with your Pomsky. If that’s not an option, try to enlist a family member or trustworthy friend to check on your four-legged pal and take him for a quick walk at least once during the day.

Professional dog walking and pet sitting services like Rover, Wag!, and PetSitter.com are available in many cities if family and friends aren’t available. Privately run doggy daycare facilities can be found in most towns, and both Rover and Wag! offer this option as well.

Things to Make Alone Time Easier For Your Pomsky

Because Pomskies are so social and affectionate, those first few times you leave him alone will be hard on both of you. Try some of the following tips to make your furry friend as comfortable and content as possible when you must leave him behind.