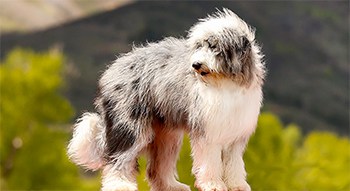 Aussiedoodles are a beautiful hybrid breed resulting from mixing a Poodle with an Australian Shepherd. Because these are two very different breeds, they also have very different hair coats. How you choose to comb or brush them can drastically alter their appearance.

In the spring and the fall, the undercoat becomes dead fur and has to come out to make room for new hair. This does require some brushing. Poodles, on the other hand, are single-coated dogs that have hair rather than fur.

Because of this, they’re not really known for shedding and don’t usually have that doggy smell often found with double-coated dogs. If the Poodle’s hair is not combed and trimmed periodically, it will become matted and tangled. Poodles do need to be groomed regularly.

Do Aussiedoodles need grooming? Because they have hair rather than fur, Aussiedoodles should be occasionally groomed to keep the length of their coat under control and make managing it easier for the owner. The frequency of grooming will depend on the dog and the owner’s personal preference.

Aussiedoodles have little to no undercoat and have hair rather than fur. If they do shed, it’s not very much. Even the F1 generation, which is 50% Poodle and 50% Aussie, tend to shed very little if at all!

Don’t be worried, having a dog that needs grooming isn’t as bad as is might sound. We’ll be breaking it all down for you, including the cost of grooming and its importance, how to avoid mats, bathing, and common hairstyles.

How Much Does It Cost To Groom An Aussiedoodle?

Grooming your Aussiedoodle yourself is much less expensive than if he was taken to a professional groomer. You’ll need to invest in a quality clipper, guards, combs, brushes, and scissors. Most of these are one-time expenses.

With some practice, you can do a lot of the grooming yourself, but most owners don’t have the time, expertise, or confidence to do the grooming themselves. The cost of having your Aussie groomed by a professional groomer depends on several factors.

An average cost for grooming is $50 to $90, but what this all includes may vary from groomer to groomer. That’s important to understand. A standard grooming package generally covers shampooing, brushing, haircut, ear cleaning, nail trimming, and teeth brushing.

Other groomers may charge a per-hour fee. It’s important to get the prices prior to having the dog groomed to avoid any unpleasant surprises. Even in the case where a groomer may charge a package price of $50 to $90, there may be additional fees if the dog requires extra grooming.

That’s sometimes the case is unexpected things come up like them finding mats (more on those painful devils later). A Doodle dog like the Aussiedoodle who has not been groomed regularly may come to the groomer all matted and tangled. In a case like this, the owner may find himself paying additional fees for additional services.

Regular grooming of your Aussiedoodle is very important for several reasons.

Mats – How to Avoid Them Through Proper Brushing

The best way to avoid mats is to groom your Aussie regularly. While some Aussie owners brush their dog a few times a week, others brush them daily. Just brushing them alone isn’t as important as brushing them properly.

One of the biggest mistakes Aussiedoodle owners make when grooming is brushing over the top of the hair and not getting down to the skin.

Using a slicker brush, begin by brushing against the lay of the coat once or twice. Then brush through layer after layer making sure you’re brushing in the direction it grows. The important thing is to always make sure you’re getting right down to the skin.

How Often Should You Bathe an Aussiedoodle?

An Aussiedoodle does not need to be bathed very often. Some owners bathe their Aussie only a few times a year while others choose to bathe them every two months.

A lot of it will depend on how much time the Aussie spends outside and how dirty he gets. If he’s the type that enjoys rolling in the dirt, and many Aussies do, he’s going to get dirtier and require more frequent cleaning. If this is the case with your Aussie, you may want to let the dirt or mud dry and then brush it out.

Brushing his hair can go a long ways towards keeping him clean and eliminating the need for baths. Bathing the Aussie too often can strip the skin of its natural oils and make the skin too dry.

When you do bathe them, use a shampoo and conditioner for sensitive skin and because to rinse it out thoroughly to avoid skin irritations.

You can line up a dozen Aussiedoodle dogs, and you’ll probably find that they all have their own appearance and hairstyle. It’s all a matter of personal preference. Some Aussie owners prefer almost a complete shave from head to toe.

The advantage of the complete shave is that the dog is cooler in the summer months, and it will be a while before the dog will need another trim and a trip to the groomer.

Some owners like their Aussie to have the appearance of a Cairn Terrier. They cut the hair on the head and face but leave some hair on the muzzle and give him some eyebrows.

Some like longer hair on the ears while others want the ears the same length as the body hair. Many owners want their Aussie to have the same haircut as you see on a Poodle with the balls on the ankles and tail.

The most popular cut among Aussie owners is still the “puppy cut” where all the hair is neatly trimmed and the same length. The haircut possibilities for Aussiedoodles are almost endless.

When should an Aussiedoodle first go to the groomer?

You should take your Aussiedoodle to the groomer for simple things like baths, brushing and nail clipping at a young age (10-12 weeks). This will help them get accustomed to the groomer, noises in the shop, the different surfaces, and even the smells. It’s a great part of the socialization process (you can read all about that, here).

Your Aussiedoodle shouldn’t need a real haircut until they’re about six months old. This is the age when they begin losing their puppy hair and getting their adult coats. This is also the time when matting can occur if the dog is not properly groomed. Avoid taking the Aussie to a professional groomer until he’s completed all his puppy shots.

How long will an Aussiedoodle’s coat get?

Grooming is an important part of dog ownership regardless of breed. Even a short-coated dog that doesn’t shed is going to need some sort of grooming even if it’s only occasional to keep the dog looking his best. When started at a young age, grooming your Aussie can be a real bonding time between you and your four-legged companion.