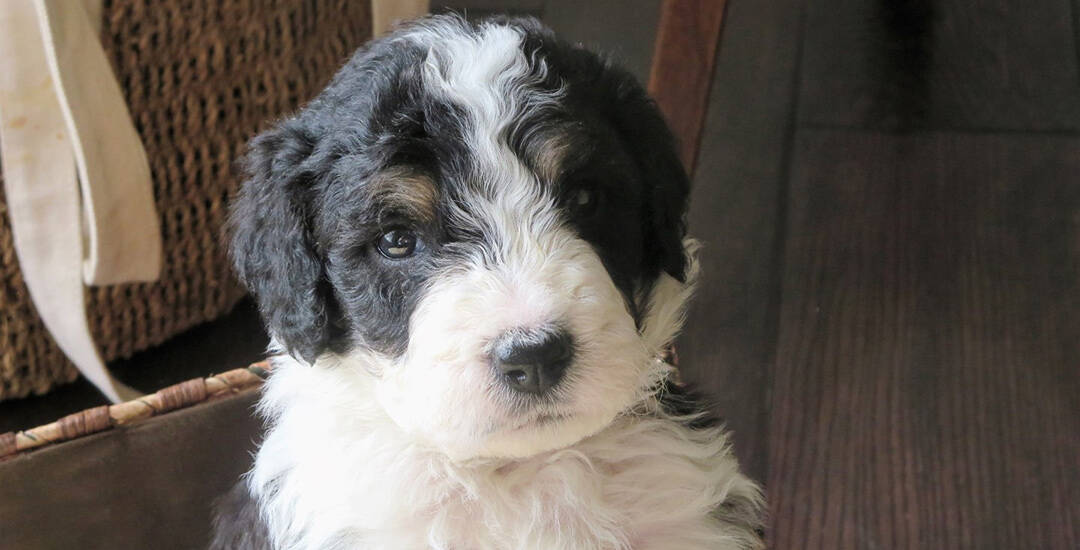 Bernedoodles are a cross between the Bernese Mountain Dog and the Poodle. As a crossbreed, they have what is called ‘hybrid vigor’. Also known as heterosis, hybrid vigor is used to describe the crossbreeding of two breeds with dispositions to different sets of health problems. Breeders are looking to eliminate bad traits like disease and increase the gene pool with more “positive” traits. Even with such purposeful breeding, there are still diseases and health issues these hybrids can be predisposed to, and the Bernedoodle is no different.

Do Bernadoodles have health issues? Yes, they are still susceptible to some health issues and diseases, including hip and elbow dysplasia, eye and heart disease, and Von Willebrand Disease. Reputable breeders will screen their breeding stock for these common conditions and diseases to increase the likelihood of healthy offspring.

A veterinarian will be helpful in diagnosing not just your pet’s current health issues but also in helping to predict what diseases might emerge.

The same goes for diseases that the Bernese Mountain Dog is prone to developing. In fact, breeders of these dogs state that eliminating many of these health issues common with purebreds is what led to them initially crossing the breeds. Therefore, Bernedoodles are considerably healthier dogs than purebred Poodles and purebred Bernese Mountain dogs at least in terms of hereditary diseases. However, they are still prone to certain health issues related to both the Poodle and the Bernese Mountain Dog. Their general good health also equates into a longer expected life span.

Getting a Bernedoodle? If you’re in the process of researching Bernedoodles, I highly recommend the book “Bernedoodles: A Head To Tail Guide”. Finding the right Bernedoodle puppy can be confusing and costly. In it, Sherry Rupke, the woman credited with creating the Bernedoodle, shares tons of info from selecting the perfect dog to choosing a quality breeder and more.

What Health Issues Come From Bernese Side

As stated above, despite the Bernedoodle being a relatively healthy breed, they may still develop certain health issues from one side of the family or the other. For instance, Bernese Mountain Dogs have a high rate of death from fatal cancer – much higher than most other breeds. Poodles, on the other hand, aren’t prone to developing cancer, so Bernedoodles are much less to develop cancer. Some of the health issues that may come from the Bernese Mountain Dog side include:

What Health Issues Come From Poodle Side

As you can see, there are a couple of health issues common to both breeds, which makes the importance of testing even more important.

Getting a Healthy Bernedoodle

All generations of Bernedoodles have the possibility to develop some type of health issue, but mixing the two breeds together was an attempt by breeders to eliminate problems that are more common with one of the parent breeders. For instance, the Bernese is prone to developing Progressive Retinal Atrophy. Breeding two Bernese together is going to increase the chance that the puppies might also develop this disease.

When you’re buying a Bernedoodle, getting a healthy dog is one of the most important things. Breeders can’t always give a 100% guarantee of good health for a puppy it sells because sometimes things just happen even with the best of care. However, with so many canine diseases being hereditary, genetic testing can reduce the risk of getting an unhealthy dog. We share some helpful tips for working with reputable breeders in this article.

Because Bernedoodles may be prone to developing diseases from both the Poodle and the Bernese Mountain Dog side, responsible breeders can have tests performed on their breeding stock to determine the health of the parents, grandparents and beyond. These tests would/should be performed on both parent breeds.

If you’re considering getting a Bernedoodle, you should ask the breeder for the results of the following tests. Many responsible breeders will have the test results for multiple past generations, too.

There is no guarantee that your Bernedoodle is going to develop these diseases, but because they’re health issues common with either the Poodle or the Bernese Mountain Dog or both, it’s important that your dog or its parents be tested for as many of these health issues as possible.

A reputable and responsible breeder will not have an issue with testing his breeding stock because he does not want to sell puppies that might be unhealthy. Nor does he want an unhealthy bloodline. Many breeders do these tests on their own so they’re able to offer the buyers some sort of health guarantees.

What Is The Lifespan Of A Bernedoodle?

Since the Bernedoodle is still a relatively new breed that’s only been around since the early 2000s, there is not a lot of information about this dog’s lifespan. With the information breeders do have available, they believe this breed to be healthy stock with an average life expectancy of 12 to 15 years.

How much exercise should a Bernedoodle get to stay healthy?

Bernedoodle dogs need to have regular exercise to keep them from becoming bored and to promote better weight and overall good health. They have a medium energy drive, and the amount of exercise a Bernedoodle needs may vary from one dog to another. Typically, they should get about one hour of exercise a day, which can be walking, running or playing fetch. Two half-hour sessions per day, if possible, often works very well for Bernedoodles.

How often can you bathe a Bernedoodle?

As much as you may want to bathe your Bernedoodle often to keep him looking good, smelling good and to keep his coat shiny, try to avoid bathing him too often to avoid stripping his coat of important oils. Professionals recommend not bathing Bernedoodles more often than every couple of months. If the dog happens to like rolling in the mud, you may want to just rinse him off or allow it to dry and brush it out. Always use shampoo for dogs and not human shampoo.

Bernedoodle owners are often very happy with their Bernedoodles because they’re adorable, intelligent, fun and just a big bundle of joy. Their overall good health makes them a healthier breed, which also makes for happier owners because few things are more distressful than loving and losing a beloved Bernedoodle pet! Being informed dog owners and aware of possible health issues can be beneficial to you and your Bernedoodle.