The Labradoodle is one of the most in-demand of the cross-breeds and known for being one of the original designer dogs. They were first bred during the late 1980s by Wally Conron, an Australian breeder seeking a suitable guide dog for a woman whose husband was allergic to dogs.

After a lot of trial and error, Conron successfully bred his finest female Labrador Retriever and a Standard Poodle and created the first Labradoodle. The breeding process has since evolved; allowing various sizes and coat colors to emerge.

What sizes do Labradoodles come in? Today, there are 4 size varieties of Labradoodles that we commonly see: Petite/Micro, Miniature, Medium, and Standard. They range from under 1 foot at the shoulder and under 10 pounds, to over 2 feet at the shoulder and 75+ Pounds. We’re going to cover the sizes and nuances of each later on, but here are the size and weight ranges for each. 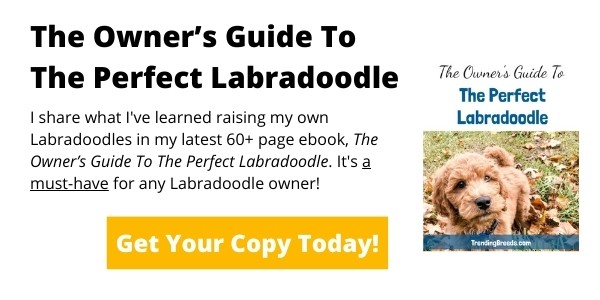 What Is A Multi-Generational Labradoodle?

Multi-Generational Labradoodles are the puppies born from five consecutive breedings and whose parents are both an F3 generation or higher. This selective breeding process helps breeders achieve litters of puppies with the traits and characteristics they are looking for. With Labradoodles, one of those desired traits is a low-shedding coat.

Generational breeding terms are often used by breeders. Here are some of you will likely encounter when researching Labradoodles:

We go more in-depth on the Multi-Generational doodle and explain the advantages of them in this article. It will also help describe any differences between the generations.

The Miniature Poodle is believed to have originated by cross-breeding Maltese and Hannes dogs to create the smaller toy and miniature breeds. The Truffle dog is also in the ancestry of the Miniature Poodle. The Miniature Poodle was used to hunt truffles in England, Germany, and Spain. They were favored by French nobility and became famous as companions. The breed is recognized as a non-sporting dog by the AKC.

Height: Between 10 and 15 inches tall at the shoulder

The Standard Poodle is the largest and oldest of the breed that the AKC recognizes. The breed originated in Germany as hunting and waterfowl retrieving dog. The standard clip of standard poodles made it easier for them to swim when retrieving and helped the dog’s joints stay mobile and keep him warm in the winter.

Height: At least 15 inches at the shoulder

There are four varieties of Labradoodles, each with distinct size and weight characteristics. Keep in mind that the size of each will vary depending on the breeding stock used by different breeders. However, an experienced and reputable breeder should be able to quite accurately predict the size pups will reach at maturity.

That said, this will help give you a baseline on the various sizes of Labradoodles. When comparing and selecting a breeder to work with be sure to ask them about their specific litters.

You may see them called Petite, Micro, and even Toy depending on the breeder. These are a happy, fun-loving size pup that are affectionate and easy to train. You might even see them competing in Agility and Competitive Obedience competitions. This size is tougher to find and you’ll likely pay a premium when you do find them.

Height: 21 and 24 inches at the shoulder

Although every dog has a different temperament, there are similarities among Labradoodles, depending on the variety of Poodle it’s bred to.

The Petite Labradoodle is an energetic, active dog who is an affectionate dog for any family. The petite loves to play and have fun with their family but is content to keep herself entertained. However, the Petite Labradoodle loves attention, is eager to please her owner. These dogs are friendly and like meeting other people and pets. Petites are extremely intelligent, making them easy to train. Many Petite Labradoodles are trained to be therapy dogs.

Miniature Labradoodles are very friendly and playful. They have a lot of energy and are very social; mainly due to the breeds. Although Poodles sometimes can be standoffish with strangers while Labradors exude personality, puppies can have dominant traits from either breed. Labradors can get lonely and have bouts of boredom if they’re left alone too much, so they need a lot of physical and mental stimulation.

Medium Labradoodles are like the other varieties in that they love to play and spend time with their owners. These dogs usually behave well, but if they’re kept inside too much, they can become restless and unhappy.

The temperament of Standard Labradoodles depends mainly on the personality of his parents. In this article, we cover the 5 main personality characteristics found in Labradoodles, which will give you a great idea of why they are so popular. Since Labradors and Poodles are very social breeds of dog, Labradoodles usually are happy with good dispositions. These dogs are excellent with children of every age, are enthusiastic, and eager to learn new things.

Not all Labradoodles look the same. Since these dogs aren’t currently recognized as a breed by the AKC, there isn’t a breed standard as there is for purebred dogs. Labradoodles can vary considerably in appearance, size, and temperament.

All of the coats do require grooming. So be prepared for some upkeep no matter which you choose. We give you plenty of tips and let you know what to expect in our grooming article.

The coat color of Labradoodles depends on their breeding. Since the dogs have the genes of a Poodle, their coats may be a variety of colors. Here are some of the most commonly seen Labradoodle coat colors:

The dog’s coat may have abstract patches of color including brindle, sable, or white. Their coats may even bleach out or lighten when they’re out in the sun, which is normal for a breed that’s so active.

Although Labradoodles were initially bred to be hypo-allergenic, not all of them have this trait. Some puppies in a litter may be hypo-allergenic while others aren’t. The dogs that do shed tend to shed less than other dog breeds. Labradoodles have broad heads, eyes that are expressive, and floppy ears. These dogs do require frequent grooming, but shouldn’t appear to be overly groomed.

Labradoodles have a lot of energy, require training beginning when they’re puppies, especially for those who are large. The dogs should have a considerable amount of exercise. Labradoodles are loyal to their owners but are very friendly, and usually warm up to people they meet for the first time. Both Labradors and Poodles have distinct characteristics.

The curly-coated Poodle is an excellent choice to be bred to a Labrador. The dogs are highly intelligent, playful, and friendly. When bred to be Labradoodles they make a delightful addition to any family. The variety of coat colors of Poodles are influential in the appearance of Labradoodles.

Here are some of the most commonly seen Poodle coat colors:

Do All Breeders Use The Same Parent Breeds?

Although the original Labradoodles were the result of breeding a Labrador with a Poodle, not all breeders rely on the same parent breeds. The Australian Labradoodle Association has approved several breeds to develop the Labradoodle breed even further, including:

The longevity of a dog breed is an indicator of the health of the breed. Generally speaking, healthy dogs that are cross-bred live longer lives than pure-breed dogs. When dogs are inbred, the risk of the dogs being carriers of a gene that causes diseases specific to that breed is higher than dogs that are a mix of two or more breeds.

What Are the Pros and Cons of Cross Breeds Versus Pure Breeds?

Pure breed dogs are the result of true breeding which means their character and appearance can be predicted from one generation to the next. However, mixed-breed dogs don’t breed true, which means the character and appearance can vary with each puppy born in a litter. By contrast, mixed breed puppies generally have more stamina and are healthier than pure-breed pups.

Another reason that a cross-breed like a Labradoodle is an excellent choice for novice and experienced dog owners is that is the gene pool isn’t as limited as it is with purebred dogs. When there’s less genetic diversity, litter sizes tend to be smaller, and the survival rate is lower than it is with a mixed-breed litter.

What is the life expectancy of a Labradoodle?

One of the best things about welcoming a Labradoodle into your home is that they have long lifespans. The standard Labradoodle can live anywhere from 10 to 15 years old, but some have survived into the late teens.

How much attention do Labradoodles need?

Like all dogs, Labradoodles love attention and companionship, but that doesn’t mean you have to spend all your time playing or going for walks. Labradoodles are always eager to please their owners and enjoy spending time with you.

What care do Labradoodles need?

Before you become a Labradoodle parent, you should find out everything you need to know about their care from the breeder. Although most dogs have an independent streak, they require their owners to make sure they get lots of love, attention, and excellent care from your veterinarian.

Although all Labradoodles require grooming, some only need to be brushed while others need frequent trips to the groomer. The more wool-like or curly the Labradoodle’s coat is, the more grooming is required; not only to keep their coat free of tangles and get rid of loose hair but to help keep their skin in good condition.

The Labradoodle’s coat must be brushed several times a week, and thorough brushing is essential. These dogs have coats that repel water, so if they get muddy, let them get dry, then brush them to remove the dirt. Although Labradoodles don’t require frequent baths, occasional bathing is a necessity.

New Labradoodle owners need to know how often their dog should see the vet. The answer is that it depends on the dog’s age and general health. Puppies need to see the vet every three to four weeks for vaccinations until they’re 16 weeks old. At the age of six months, your Labradoodle can be spayed or neutered.

From the time your Labradoodle reaches maturity at about one year of age, he’ll see the vet once a year for a general wellness check-up. After the round of vaccinations when they’re puppies, Labradoodles usually have their boost vaccines every three years. However, the time frame for vaccines depends on state law.

A lot of veterinarians now recommend that your dog come in for a check-up every six months once they reach the age of about seven. Some dogs start to have mobility or other issues, and the veterinarian can prescribe the best treatment to keep your dog healthy and happy.

What kind of food do Labradoodles eat?

Each dog has different tastes and dietary needs. The food you feed your Labradoodle depends on their age, size, and level of activity. Puppies require food that has the nutrients that help their bones and muscles to develop properly. If you’re going to feed your puppy dry food, check the ingredients list.

The dry dog foods that are the highest quality have some meat or poultry listed as the first ingredient. You don’t want to buy any food that has any grain listed as the main ingredient, because your puppy will be digesting a lot of fillers instead of food with needed vitamins and minerals. There are a lot of excellent dry dog foods on the market that are natural and don’t contain any artificial ingredients or fillers.

The popularity of the Labradoodle breed has made for a variety of options when it comes to size and color combinations. Whether the compact energetic nature of the Petite or the Size and versatility of the Standard, there’s a perfect doodle out there for everyone.