Intelligent, adorable, and best of all, hypoallergenic! That’s the Maltipoo for you.

The endearing cross between the loving, affectionate Maltese and the intelligent Toy or Miniature Poodle, Maltipoos are a designer dog breed that has been gaining popularity in leaps and bounds in recent years.

Hybrids combine the features of two different breeds and enjoy the best of both worlds. On the one hand, you’ve got the gentle, trusting Maltese, and on the other, you’ve got the intelligent, trainable Poodle.

Other articles you would like: How Much Does A Maltipoo Cost? and Maltipoo Breeders By State

Facts About The Maltipoo

The result of such a combination can be nothing less than the perfect companion dog; the Maltipoo.

If you were wondering about this diminutive, oh-so-adorable breed, this blog post is for you.

We’re going to look more closely at this hybrid that has captured the hearts of so many, shed some light on their instincts and behaviors, and hopefully help you decide whether you’d like to bring one into your life.

The history of Maltipoos is a short one and not very well-known. That might be because designer dogs only started to be developed in earnest in the 1990s.

The term “designer dog” is used to describe a cross between two purebreds, and the practice of breeding designer dogs began as early as the 1800s.

It was originally done in an attempt to create a new type of dog that would be more resistant to disease and pests.

However, the popularity of designer dogs really took off in the 1990s, when breeders began to focus on creating dogs with specific physical traits.

This led to the creation of many popular designer dogs, such as the Labradoodle, a Labrador Retriever-Poodle mix, and the Cockapoo, a Cocker Spaniel-Poodle mix.

Breeders started to cross Poodles with Malteses in the hope of developing the ideal companion dog that doesn’t shed.

In addition, the new hybrid would be calmer than the Poodle, which can be a high-strung or nervous dog. Hence, the Maltipoo was born.

Today, the Maltipoo is one of the most popular of the hundreds of different designer dog breeds, and their popularity shows no signs of waning.

To understand the Maltipoo, we need to understand a little about the two parent breeds from which they come.

The Maltese is thought to be descended from one of the ancient toy Spitzes of the Mediterranean region. The exact area of origin of the Maltese is unknown but is largely believed to be Malta.

The breed became popular among European nobility in the Middle Ages and has been featured in many works of art from that period.

In more recent history, the Maltese has been a favorite companion of all kinds of royals and celebrities from Queen Victoria to Marilyn Monroe.

Today, the Maltese is still prized as a beloved pet, and its gentle nature and affectionate disposition make it an ideal companion for people of all ages.

Despite their modern image as fancy show dogs, Standard Poodles were originally bred in Germany to hunt waterfowl. They were (and still are!) athletic, intelligent, and highly trainable, leading to their popularity explosion all over Europe.

They soon made their way into France, where they were frequently employed to perform in circuses.

To make traveling easier, the circus Poodles were soon bred down in size, leading to what is now the Toy and Miniature Poodles.

To this day, Standard Poodles are athletic canines that make excellent duck hunting dogs, while Toy and Miniature Poodles are mostly found as companion dogs, beloved all over the world.

Because the Maltipoo is a mixed breed and Poodles vary in size, there is no definitive answer to the question of how big a Maltipoo can get.

Teacup Maltipoos can range from 4 to 8 lbs, but some have been known to grow up to 20 lbs. They are small dogs that stand 8 to 14 inches at the shoulder.

They have a wavy or curly, medium to long coat that sheds very little. Both the Poodle and the Maltese are hypoallergenic breeds, so it is unlikely that a Maltipoo will trigger any pet allergies.

Their coats are most commonly cream or off-white, but can also be black, red, blue, gray, brown, bi-colored, or tri-colored, depending greatly on their Poodle parent.

The temperament of a Maltipoo is a dream come true. After all, they were bred to be the perfect companion dog.

Maltipoos have loving dispositions that adore their owners. Playful and affectionate, they are known for their loyalty, trainability, and intelligence.

Taking after their Poodle parent, they are eager to learn, are quick to pick up new tricks and commands, and love to please their owners.

However, they are sensitive dogs and will only respond to positive reinforcement. Any harsh corrections or treatment might have your Maltipoo shutting down, becoming aloof, fearful, or losing interest in training.

Despite their small size, Maltipoos can be fearless dogs who will stand up to larger dogs if they feel their pack is threatened.

This courageous streak coupled with their affectionate nature makes the Maltipoo hugely popular with all kinds of owners including seniors, families with young children, first-time dog owners, and everything in between.

The Maltipoo is a small dog with modest needs. However, they are energetic, athletic canines that need their daily exercise to stay physically stimulated.

A Maltipoo with excess energy and no outlet to burn it out on is liable to cost you a pretty penny in chewed-up shoes and furniture!

Although they are active dogs that can be prone to bursts of energy, their small stature doesn’t require an immense amount of exercise. A 30-minute walk a day and loads of playtime in between should keep a Maltipoo physically healthy.

In addition, Maltipoos are intelligent dogs and need mental stimulation to stay happy. Interactive dog treat dispensing toys should keep them occupied for a while, or a Kong filled with their favorite stuffing.

In addition, they might also do well in agility and obedience training. They enjoy learning new things and will happily work for treats.

Although Maltipoo sheds very little, they have medium to long, lustrous coats that need frequent grooming and an occasional haircut at the groomer.

400;”>Grooming requirements for a Maltipoo can vary depending on the length of the coat you allow your dog to grow. The most important thing to remember is that a Maltipoo’s coat is very susceptible to matting, so it’s important to brush regularly.

Daily brushing is ideal, but if that’s not possible, try to brush at least three times a week.

In addition, you’ll need to trim your Maltipoo’s nails every two to three weeks and bathe him or her every four weeks or so or whenever needed.

In addition, your Maltipoo will need its eyes and ears cleaned regularly, as well as its teeth brushed.

Smaller dogs are more susceptible to eye conditions, and regularly wiping down the eyes from dust and debris as well as removing tear stains can help prevent eye infections or complications.

A Maltipoo’s floppy ears also will need more frequent cleaning as floppy ears tend to create a warmer, more moist environment for bacteria and wax to build up, leaving the pooch vulnerable to infection.

Lastly, small dogs are more vulnerable to dental problems. First, they have smaller mouths, which means that their teeth are more crowded and more likely to become plaque-covered.

Second, small dogs typically have less jawbone density than large dogs, which can lead to tooth loss and gum disease.

Finally, many small dog breeds have high levels of tartar production, which can further contribute to dental problems.

Maltipoos are relatively healthy dogs with a lifespan of 10 to 15 years (yay!). While many external factors dictate their lifespans such as diet, exercise, and lifestyle, the health of any dog is greatly determined by its genetics.

Maltipoos will, of course, take over the genetic predispositions of the two parent breeds, who commonly carry a few health conditions.

White shaker syndrome is a condition that affects small dogs. The syndrome is characterized by tremors and weakness, and it can be very debilitating for affected dogs.

Unfortunately, there is no cure for white shaker syndrome, and the condition is often severe.

However, there are some steps that dog owners can take to help their dogs deal with the symptoms of the condition.

For example, owners can provide their dogs with a comfortable place to rest, and they can give them food and water regularly.

Additionally, owners should avoid exposing their dogs to stressful situations, as this can trigger a seizure. Although there is no cure for white shaker syndrome, taking these measures can help to improve the quality of life for affected dogs.

Luxating patella is a common knee problem in dogs that occurs when the kneecap (patella) slips out of place. This can cause pain and lameness in the affected leg.

While luxating patella is most commonly seen in small breeds, it can occur in any size of a dog.

Treatment for luxating patella depends on the grade of the condition. Luxating patella is a common knee problem in dogs, but with early diagnosis and proper treatment, most dogs can make a full recovery and go on to have a long, happy life.

Legg Calve Perthes (LCPD) is a condition that primarily affects small breed dogs. It is caused by the interruption of blood flow to the head of the femur, resulting in avascular necrosis (AVN).

LCPD typically affects puppies between the ages of 4 and 6 months, although it can occur at any age.

Symptoms include limping, hip pain, and lameness. If left untreated, LCPD can lead to joint deformity and arthritis. Early diagnosis and treatment are essential for the best possible outcome.

Conclusion For Facts About The Maltipoo

If you are looking for a small dog that is great with kids and other animals, the Maltipoo may be the perfect fit for you. These dogs make wonderful companions and will always be happy to see you.

The Maltipoo will suit almost all kinds of owners and households and are also very low-maintenance, so they are perfect for people who lead busy lives.

We hope this article has shared some useful information about this endearing, adorable breed!

For more information about the Maltipoo Breed, check out the video below: 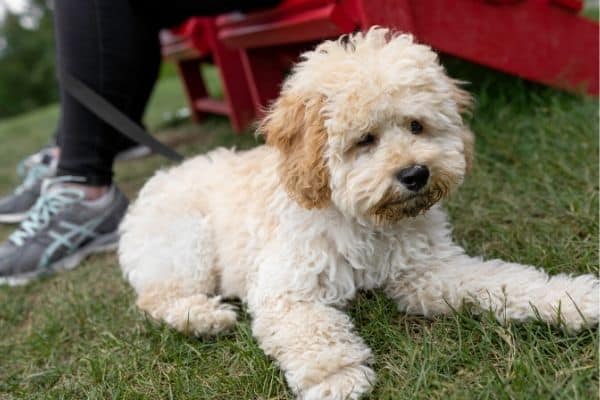 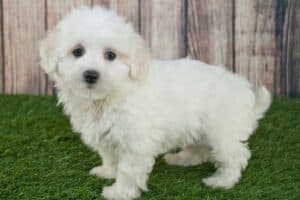 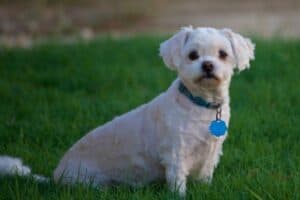 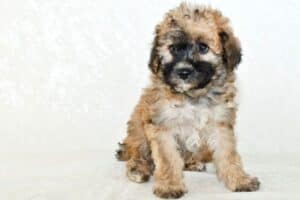 How Much Does a Maltipoo Cost? Actual Breeder Prices (2023)