Two things that really irk me…wrinkles and dog hair being shed all over the place. I grew up with dogs, but they were the ‘family dog’ so I didn’t necessarily have much say in what kind we got. As an adult in the quest for a dog of my own, I naturally set out to find one that was non-shedding. I was drawn to the Labradoodle because of their activity levels, their friendliness and intelligence, and the look of their coats. But the big question that still needed to be answered…

Labradoodles are known for being a low-shedding to no-shedding dog breed. But it really depends on the Labradoodle and their genetics. For instance, an F1 Labradoodle (50% Poodle, 50% Labrador) is more likely to shed than a Multi-Generational Labradoodle (where both parents are Labradoodle). The short answer is that in most cases, shedding is extremely minimal to non-existent.

It shouldn’t even be considered shedding…

A lot of people say it’s really not shedding since shedding is a constant process, usually. For a Labradoodle, it’s more like how we, as humans, lose hair here and there or have some damage which causes breakage. I definitely agree. Bottom line, you won’t be chasing fluff-balls all around the house like you would with other breeds. And your favorite black dress or pants, they won’t be caked with fur. You won’t see fur flying when you pet them.

In my experience, it’s nothing compared to what you’d see with a purebred Labrador…German Shepherd…or Golden Retriever. Not even close. I sweep up more leaves and twigs (two of Oliver’s favorites) than I do hair, hands down.

In fact, I don’t even notice his hair. He was laying across my lap as I typed this up and not a single hair. This is the reason people call Labradoodles ‘non-shedding’ because they lose such small amounts of hair. I’d go so far as to say I lose more hair than he does. 🙂

Don’t just take my word for it! I share what other owners say about their Labradoodles’ shedding habits down below.

A ton of people have allergies to dogs. It’s said that over 10% of the world’s population has an allergy in some regard, experiencing coughing, sneezing, face pain, itchy eyes, and even tightness in the chest (source). Scary stuff!

According to the Australian Labradoodle Association of America, the Labradoodle was originally bred in Australia with the hopes of creating a hypoallergenic breed (source). A service dog was needed for a visually-impaired woman whose husband’s health was affected by allergies.

Fact: There are no ‘Hypoallergenic’ dogs.

Why is that? Because the allergens dogs produce come from their:

So even if you’re able to find a dog that doesn’t shed at all, they’ll still have dander, saliva, and urine. And on top of that, they still drag in dust and pollen from being outdoors.

I’d say that while they’re not hypoallergenic (allergy-free), Labradoodles are more allergy-friendly than most breeds. Most people allergic to dogs are actually reacting to the proteins found in their saliva and urine. When a dog licks itself, the protein in the saliva attaches to their hair and skin. The skin dries and eventually falls off as dander. They also shed their hair – both of these things release the most common allergens into the air, causing affected people to react. The fact that a Labradoodle sheds far less than most other breeds should reduce the allergens, but not eliminate them completely.

If you’re interested in another allergy-friendly and low shed breed, be sure to check out Bernedoodles. They are a beautiful hybrid cross between a Bernese Mountain Dog and Poodle.

Do Labradoodles Shed Their Puppy Coat?

As a puppy, Labradoodles’ coats are extremely soft and relatively easy to care for. This is especially the case if you brush and comb them often (we cover everything you need to know about grooming a Labradoodle in this article). As Labradoodles get older, their coat will begin to change as their permanent coat starts to grow in. This is a gradual process and usually starts somewhere between 6-12 months. During this process, a Labradoodle’s coat will start to fill out and begin to thicken, which causes tangles and matting.

It’s more important than ever that they are brushed frequently (every day would be best). For this, we’d recommend using a slicker brush to help this process along. There are a ton of different brushes out there, but here’s the one we use and recommend on Amazon. 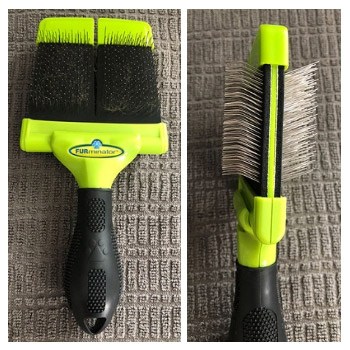 Also with the permanent coat can come changes to the appearance, texture, and color. The coat may become wavier…or get a little curl to it…or it might even lighten or darken. If you’ve seen your pup’s parents, you might have a better idea of how the Adult coat will end up looking.

Make Way For The Adult Coat

This is the point where many Labradoodle owners throw in the towel, take them to the groomers, and have them shaved. It’s time-consuming and will certainly test your patience, but it will all pay off. As the permanent coat grows in, the puppies coat needs to be ‘pulled out’ through lots of brushing and combing. This is a much different process than what you’d see with other breeds (like German Shepherds) that ‘blow their coat’. You’ll notice the puppy coat (super soft and fluffy fur) coming out in the brush — this is a good sign.

Also, make sure that you’re brushing down to the skin. Many times, people don’t brush their Labradoodle to the skin and mats will form below the surface. It can be helpful to use a comb to check your work and ensure you’re not missing any mats.

Mats are dense clumps of fur in a Labradoodles coat, caused by lack of brushing or just plain bad brushing. When a Labradoodle puppy is going through their coat change, the matting is usually caused by the dead puppy coat tangling with the permanent coat that’s trying to grow in. Not only are mats extremely ugly to look at, but they can also put your dog in a great deal of discomfort. If not addressed, moisture can get trapped between the skin and mat, causing bacteria to grow and infection to set it. Mats can occur anywhere on the coat, but here are some of the most problematic areas:

Removing mats is a time-consuming process and can be painful for Labradoodles. Keep up with maintaining their coat to prevent mats from forming.

Do some Labradoodles shed a lot?

Yes, it’s possible to get a Labradoodle that sheds more like a typical shedding breed. Many F1 (first generation) Labradoodles will shed quite a bit, in fact. When this happens, it’s because they inherited more of the shedding coat from the Labrador side. To get a Labradoodle with a more predictable and proven coat, look for a Multi-Generation (Multigen) Labradoodle. Since both of their parents are Labradoodles, you’re more likely to get the low-shed coat you’re looking for.

How can I tell if my Labradoodle will shed?

The best way to tell if your Labradoodle will shed is to talk with the breeder. Finding a breeder of Multi-Generation Labradoodles is best because they are able to breed out unwanted characteristics (like shedding) much better. Ask the breeder for references of people who have pups from the same Dam and Sire (mom and dad) you are considering.

Also, ask the breeder to meet the mom and dad of the litter. This will not only give you an idea about their coat but also their temperament and size as well. If you’re planning on working with a breeder, be sure you check out the must-ask question list for breeders in this article.

Are there different coat types for Labradoodles?

Yes. Labradoodles have 3 main coat types: Hair, Fleece, and Wool (also called curly). The most common and most sought-after coat is the Fleece coat. The Hair coat, because of its close resemblance to the Labrador’s coat, tends to shed more than the other two coat types.

Is a Labradoodle a good family dog?

Labradoodles aren’t one of the most popular poodle mixes just because they’re low shed. Their friendly loving nature makes them great dogs for families. They are typically high-energy and do best with a family that has time to run them and keep them active.

“None. Mine is a f1b though, so 3/4 poodle. He obviously sheds some when I brush him, but doesn’t technically “shed”.”

“A moderate amount – still like 1/4 at most of what a lab sheds. F1 with a straight coat, definitely more lab like.”

“He only sheds when I brush him”

“I have an f1 and she doesn’t shed much. I try to make sure I brush her coat out a couple times a week. I don’t notice much hair in the house (unless I vacuum under the couch).”

Yes, a Labradoodle will lose hair. But so will you! Don’t let a few tufts of hair coming out when you brush them deter you. With a little education and researching breeders, you should be able to find a Labradoodle that meets the no-shedding claims they’re known for.