I’m the proud owner of a Doodle dog (Labradoodle) named Oliver. And I can remember reading about the importance of a dematting comb very early on.

I mean, it was one of the top-suggested tools on many of the puppy supply lists I came across. I never thought I’d need it because I was going to be the most diligent dog brushing owner out there.

But I bought the Safari mat removing comb on Amazon, and put it in the cabinet, ‘just in case’. Well, it found its way out of the cabinet recently and did exactly what I needed it to do. 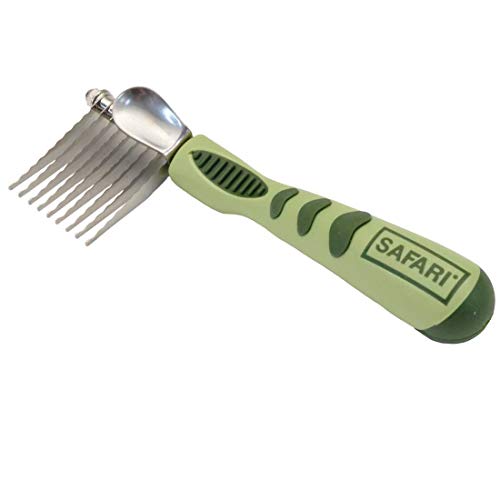 It cut through the mats easily

Oliver actually got mats in his ears. He likes the sprinkler a lot and when wet mixes with dirt, it’s a recipe for mats.

The comb itself has a smooth bottom edge which makes it easy and safe to slide along their skin to get under the mat. The top edge is sharp and serrated — that’s what you want to you can cut through the mats easily. It basically splits the mats apart, making it easy for you to comb them out.

It’s well made and fits nicely in your hand

Depending on the mats you’re facing, you could be holding this thing for a while. I really like that it has a comfortable grip and a place for your thumb to rest.

Here are some other details about it

This Safari dematter is used by tons of other Doodle owners, too.

I saw one owner, with an Australian Labradoodle, talking about how the “comb is pretty amazing, simply put.” They really liked it for its sturdy feel and slim teeth which made it easier to get through their pups thicker coat.

At the time I’m writing this, this thing has almost 2,400 reviews and stands at a 4.6 star rating on Amazon. And a large majority of the people reviewing it have Labradoodles and Goldendoodles.

Read the Amazon reviews for yourself. You’ll see what I mean.

And the funny thing is, a lot of people talk about how they found this comb in the first place…they were told about it from a fellow dog owner with the same breed as them. That’s honestly how I find most of the tools I use with Oliver.

It’s sad because so many people don’t even know something like this exists and are actually cutting the mats out of their Doodle with kitchen scissors or something.

One of the reviews I read on Amazon was from a lady with a 10-month-old Goldendoodle who was getting mats from licking. That’s exactly what she was doing. Cutting the mats out…carefully, so she didn’t leave him with huge bald-patches.

She said she can’t believe she’d lived without it and will be recommending it to other Goldendoodle owners!

Why getting mats out it so important

Mats are dense tangles in a pup’s coat that are usually caused by a lack of brushing or incorrect brushing technique. It’s really common for Labradoodles, Goldendoodles, and other Doodle breeds to get mats.

You might not have known this, but Mats can actually cause quite a bit of discomfort and even pain to your pup. And because they are usually close to the skin, they hold in moisture. Severe matting, if not addressed properly, can cause bad irritation to their skin and even open up, causing an infection.

Where do mats usually occur?

Matting can theoretically happen anywhere on their coat. But here are the areas you should check most:

I’ve seen some really extreme cases of matting that are downright disgusting! When it gets to that point, a groomer usually steps in and has to shave the dog’s entire coat off.

How can you prevent mats in the future?

Hands-down, the easiest way to keep your dog mat-free is to brush them regularly (2-3 times a week). I like to use a comb like this one to check their fur for tangles.

The nice thing about the comb is that it can easily get down to their skin.

That’s one of the biggest problems actually. People ONLY use a brush and think they’re doing a great job. But they’re only brushing the top layer of the dog’s coat…while mats are forming underneath.

Get yourself this comb. And a slicker brush like this.

Comb them first to make sure they don’t have any tangles, then brush them out with the slicker brush to finish things off.