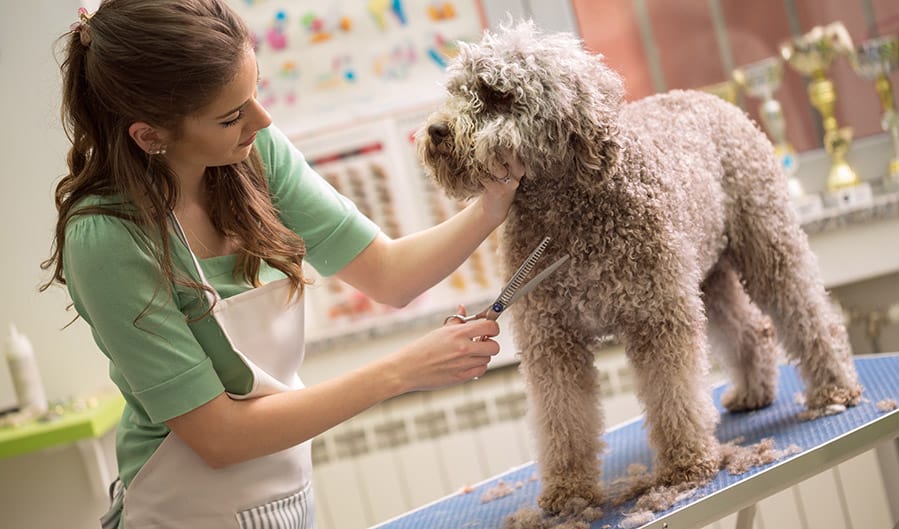 Like many dog lovers out there, one of the things that attracted us to the Labradoodle breed in the first place was their amazingly soft and teddybear-like coats. But that coat doesn’t come without cost and will require a little TLC on your part.

Do Labradoodles need grooming? Yes, it’s recommended that a Labradoodle be professionally groomed every 6-8 weeks. Exactly how often they need grooming depends on the dog’s coat type and the owner’s preference for their appearance. It’s also critically important to brush and comb your Labradoodle between clippings to prevent matting.

I own 2 Labradoodles and in my personal experience, both pups start looking a little shaggy around the 6-week mark.

I can usually tell it’s time for a grooming session when I start having trouble seeing their eyes.

I highly recommend searching for a groomer before you bring your Doodle home. Try to find one that has experience with Labradoodles.

This will help you avoid the nightmares I ran into with my first pup, Oliver (I share that experience in my best-selling Labradoodle book).

But you’ll also need to take them in for a “puppy cut” early on. This is an important set in getting them comfortable with your groomer.

To make the grooming process as easy as possible…make sure you take good care of their coat at home.

I cover all that in the next section – so read on!

Early on, we relied on our breeder and other Labradoodle owners for recommendations on what supplies and tools to use. I wanted to make sure we had everything ready when we brought him home, so we could start the routine from day one.

You can find some of our favorite grooming tools and supplies, here.

Caring for a Labradoodle’s coat really isn’t bad as long as you put in the effort and keep up with it. But it’s important to know what you’re getting into.

Importance Of Brushing And Combing

Regardless of the coat type of the Labradoodle (more on that down below), combing and brushing are extremely important. It’s essential with any breed, really. Not only does it keep your pup looking good and mat-free, but it also helps in the bonding between you and your dog.

3 Tips For Success With Brushing

As they get older and their coats longer and thicker, brushing becomes critical. Without proper care, Labradoodles are prone to matting. Mats that are left to worsen will result in your pup having to get shaved. How embarrassing would that be!?

#1 Best Seller
The Ultimate Labradoodle Guide Get Your Copy Today!

There are 3 coat types seen in Labradoodles and Australian Labradoodles. Because they are cross-breed or hybrid dogs, there’s always the chance a pup’s coat can have characteristics of more than one type (we’ve included some of these possible variations for you below). You should also know that your pup’s coat will look different depending on the length you keep it.   To get a better idea of what your pup’s coat will be like, ask your breeder to see pictures of past litters from the same parents.

The Hair coat is sometimes called a straight (or slick or flat) coat because it’s, well, usually pretty straight. This coat more closely resembles that of a purebred Labrador Retriever. It’s not going to produce the same look you associate with a Labradoodle. In fact, I’ll sometimes confuse them with a normal Labrador. This coat is not nearly as desired as the Fleece and Wool coats.

Probably the most common and most sought-after coats of the Labradoodle, the Fleece coat is characterized by it’s wavy and extremely soft texture. It’s the coat that most people associate with a Labradoodle.

The Wool coat is made up of small tight curls which makes it more dense to the touch – it most closely resembles that of a Poodle. As the coat gets longer, the curls tend to become tighter.

So a Labradoodle only has genes from a Labrador and a Poodle. No other breed. You might have seen things come up in your research about Australian Labradoodles.

An Australian Labradoodle starts with a Labradoodle and can have hints of Irish Water Spaniel and Curly Coat Retriever (and possibly others). Breeders have included these other breeds in attempts to perfect their low-shed and low-allergy traits.

FUN FACT: We had no clue there was a difference between a Labradoodle & Australian Labradoodle until after we brought our pup (Oliver) home. So if you are just starting your search, you already know more than we did at that stage! If you’re still in the research process, our Labradoodle Buyer’s Guide is definitely something you should check out.

How much does a Labradoodle groomer charge?

A groomer will likely cost you $50-75 to have your doodle groomed. But it’s definitely possible for you to learn to clip your pup at home. It would save you money over time, but you’d need to invest $50-100 to get clippers and shears.

Can you have your Labradoodle groomed by any groomer?

Most quality groomers have the skills to groom a Labradoodle. The question is more of ‘do they have the experience with different Labradoodle grooming styles’. You should call and talk to the groomer before making an appointment to see if they are experienced with that breed. We recommend you search the internet and Instagram for some styles you like. Take these along and show the groomer what look you’re wanting.

Well, There You Have It!

We’ve covered a ton here, but hopefully, all your questions have been answered. Don’t let the fact that Labradoodles need grooming and a little more care than the average pup deter you from the breed. They are amazing dogs and well worth the extra time and investment.