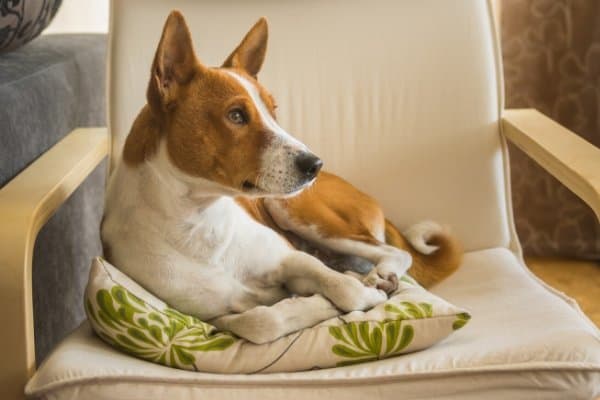 A fastidiously clean, relatively small dog known for being odorless and barkless, at first glance, the Basenji appears to be the ideal breed. There is, however, much more to this unique breed, as new owners quickly discover.

Although Basenjis can be affectionate, rewarding pets and typically do well with children, they also are famous for a fiercely independent and sometimes aloof nature and can be a challenge to train.

They are indeed known as barkless dogs, but is this really an accurate nickname and can you expect them to always be totally silent?

Why don’t Basenjis bark? It’s thought that the shallowness of the Basenji’s laryngeal ventricle limits the ability of the vocal folds to vibrate sufficiently enough to make the barking noise. Some believe the ability to bark was purposely bred out to avoid attracting predators to villages.

Of all of the Basenji’s personality quirks, perhaps the most intriguing is the inability to produce a normal-sounding bark.

Let’s take a closer look at their vocalizations and methods of communication and check out some other dog breeds known for not barking (too much).

Why a True Bark is Very Rare

While the exact cause of a Basenji’s inability to bark is a bit of a mystery, it is commonly believed that the internal structure of their throat is the underlying cause. You see, while the Basenji’s throat contains the same basic features as all other dogs, there is a slight difference that makes them unique.

The ventricle of the larynx is more shallow in Basenjis and is believed to limit the ability of the vocal folds to vibrate sufficiently enough to make a classic bark sound possible.

This theory was reached after several autopsies were performed on Basenjis who had been transported from Africa to the U.S. as young pups and therefore represented the truest strains of the breed in the country at that time.

The inability to bark is believed by some to have been intentionally bred into the breed long ago in their native land of Africa. Others think that it is a naturally evolved trait that developed over time.

Either way, not barking at every little noise may have helped the breed survive its semi-wild existence and proved them useful to African hunters as stealthy, cunning sighthounds and to villages as dependable watchdogs as they were not constantly making noises which would attract large predators.

What Vocalizations Do Basenjis Make?

While a true, classic-sounding bark is indeed quite rare, Basenjis are far from being totally silent and are capable of (and fond of) producing a wide variety of other sounds, some comical, some ear-piercing and some common to breeds of all types.

One of the Basenji’s trademarks is the “barrooooo” sound. Not quite a howl, not quite a yodel, but somewhere in between. Howling and yodeling , by the way, are two different sounds and are both frequently employed by Basenjis to express unhappiness, communicate with other dogs, gain attention, “sing” along with musical instruments and sirens, etc.

Hair-raising shrieks and human-like screams are commonly reported by Basenji owners and have led to more than one incidence of police knocking at the door ready to rescue the abused woman or children that the neighbors reported.

A few Basenjis have been reported as being able to “talk.” After hearing a certain word or phrase such as “I love you,” or “Mama,” repeated over and over, they can rather effectively reproduce the phrase with a surprising level of human-like inflection.

Some owners swear that their dogs actively try to mimic the sounds of other animals, which as you can imagine, often leads to confusion and head-scratching as the owner spends hours searching the house for the wayward animal that they assume found its way inside.

Like other dogs, Basenjis can also make the usual assortment of growls, whimpers, and whines. Some owners claim that their dogs occasionally produce a bark-like noise that sounds more like a “boof” than a pure bark.

Still other owners claim that once in while their Basenji does make a normal-sounding bark. Because of the design of the Basenji’s larynx, a true bark really shouldn’t be possible, and the possibility exists that at some point in time a different breed was added to the dog’s genetic line, either intentionally to enhance or eliminate another trait or by accidental breeding.

Do Basenjis Communicate in Other Ways?

Basenjis, like all dogs, do not rely solely on vocalizations to communicate. Body language is actually a dog’s primary method of communication with vocalization used as a secondary measure.

The problem is that many people don’t pay attention or bother to learn what their dog is trying to tell them.

Spending time quietly observing your dog and his physical responses to various situations is one of the best ways to learn how to correctly read your dog’s body language. Excellent books on dog communication are available as well and can be a huge help when learning to interpret and differentiate between similar body signals and postures.

Tip: The key to correctly interpreting a dog’s body language is to look at the entire dog, not just the ear position, tail carriage, facial expression, etc.

Are There Other Dog Breeds That Don’t Bark Much?

Dogs have been intentionally bred to fulfill certain roles for many, many years. Some breeds were created for jobs such as watchdog, herding livestock, and tunneling underground to search out vermin, where barking was a great asset. For other breeds, the ability to remain quiet better suited their particular roles.

Breeds such as the Alaskan Malamute, the New Guinea Singing Dog, and the Siberian Husky almost never bark, though like the Basenji, do make plenty of other vocalizations including howling.

It’s true that many small breeds like Chihuahuas can be on the yappy side, especially when they have not been properly trained, but others like the Pug and Japanese Chin are known for being calm and quiet.

The Bull Mastiff was created to silently stand guard, bravely protecting gameland from poachers. Another breed developed for quietly standing guard is the wrinkly Chinese Shar-Pei, and the fisherman’s helper, the Newfoundland, never had much use for noisy barking when working at sea.

There is a long list of other breeds that have the reputation of being fairly quiet. Unlike the Basenji, they are capable of barking, they just choose to save it for when it is truly necessary.

Here are some of the more commonly known breeds that are often touted for their quiet demeanors.

Note that of the above breeds, several are sighthounds, also known as gazehounds. The Afghan Hound, Borzoi, Greyhound, Rhodesian Ridgeback, Saluki, and Whippet as well as Basenjis all hunt primarily by sight and speed instead of by scent as a Basset Hound does and are known for being calm, laid-back, and relatively quiet.

Do Basenjis really keep themselves clean?

Yes. Basenjis can often be found licking themselves all over much like a cat does (Vizslas do this too!). The short coat doesn’t tend to trap dirt and debris like thicker or longer coats do and while they do shed, the amount of mess is negligible compared to other breeds.

As an added bonus, Basenjis do not get that unmistakable doggy smell like most other dogs.

Can a Basenji be a good watchdog?

Yes. Basenjis are blessed with keen eyesight, and, thanks to those large ears, superb hearing. They are naturally alert, intelligent, and wary of strangers and won’t hesitate to let you know when something is not quite right.