Though Whippets are perhaps most well known for their gentle, sweet temperaments and their amazing sprinting abilities, they were once also highly valued for their competence as hunters. This sighthound breed was so skilled at quickly snapping up small game that they soon earned the nickname “snap dogs.”

The nimble Whippet was indeed so treasured by their owners for putting food on the table and earning much-needed cash at various sporting games that they were kept safely indoors with the family. Today, they’re still enjoying pampered lives and are excellent companions. Though they are praised for being quiet and calm when inside, people often wonder if this is really true.

Do Whippets bark a lot? No, Whippets are not known for being very vocal. They may bark to alert you to creatures outside or if the doorbell rings. Some bark when playing or to communicate a need. Whippets may also whine, sigh, or even howl occasionally, but growling is rare.

In the following, we’ll discuss some common causes of barking, how to keep it to a minimum, and a few other issues to look out for.

Be sure to read through to the end where we share what actual owners have to say about their Whippets barking habits.

Why Do Whippets Bark?

Barking is common to all dogs including Whippets. It is one of the major ways dogs communicate with both people and other dogs. While most Whippets are relatively quiet, especially when indoors, sometimes they will bark. Let’s look at the most common reasons for barking.

The Joy of Playtime

The sheer excitement of playtime or the anticipation of play can often elicit a few barks. Some Whippets may bark while joyfully running after a flying tennis ball while others may bark at the mere sight of the ball in the owner’s hand. It really depends on the individual dog and his level of excitement at any given moment.

When a Whippet is playing with another dog, or better yet, another Whippet, barking is often heard. Of course, no one can say for sure what exactly is being communicated when dogs bark to each other during play, but one thing is obvious – they sure are having fun doing it!

The Owners Have Been Trained

If you find yourself dashing to your Whippet every time you hear a bark, guess what. Yep. You have been trained. Whippets are quite intelligent and will soon learn that barking leads to a reward, usually in the form of coveted attention. Don’t be embarrassed. Many owners have fallen for this trap.

To Communicate a Need

Sometimes a Whippet may bark in order to communicate a legitimate need. How else is your dog going to let you know that someone forgot to feed him dinner or that it is too cold outside and he needs to be let back in? Maybe a treasured toy is stuck under the couch or it’s time for a potty break. A bark or two is certainly understandable in situations like these.

Too Much Alone Time

Whippets are very loyal dogs and love to be with their families. They are even sometimes called Velcro dogs for their tendency to stick so close by. If for some reason they feel ignored or are left alone for a long time they may bark as if to say, “Hey! What about me?”

There Is Something to Bark About

When someone is approaching the house or a critter has the audacity to walk through “his” yard, a Whippet may sound the alarm.

Although Whippets are so friendly that they do not make good guard dogs, canines have an inherent sense when something is wrong or when danger is present. The instinct to alert his “pack” will often take over in situations like these and barking will result.

Many Whippet owners report that their dog barks with joy whenever a family member returns home whether it’s after being gone for hours or just a quick trip to the mailbox. Any absence is noted and any return is celebrated. Now that is love.

How to Minimize Whippet Barking

It is important for you to be able to differentiate between acceptable barking and nuisance barking. Annoying barking is usually not an issue with Whippets, but some are admittedly more vocal than others.

All of the above-stated causes of barking are perfectly normal and should not result in discipline. After all, you want your dog to feel comfortable enough with you that he wants to communicate regularly. This is a sign of trust and devotion – exactly what you should aim for in any relationship.

On the other hand, excessive barking can drive everyone in the household crazy and cause your rapport with neighbors to quickly spiral downhill. Persistent barking that occurs for more than 5 minutes is usually considered to be excessive. Chances are that you won’t have this problem with a Whippet, but if he barks more than you’d like, there are ways to control it.

Sometimes dogs bark at things simply because they are not used to them or are afraid. If you suspect this might be the reason for the annoying noise, some additional socialization will help.

Introduce your Whippet in a positive, upbeat way to whatever it is that sparks the urge to bark. Whether he barks at new people, animals, or unfamiliar objects, allow him to be properly introduced to help him realize that it really isn’t so scary after all.

Two common causes of nuisance barking are pent-up energy and boredom – a bad combination. The solution is easy. Increase the amount of daily physical activity and be sure to provide opportunities that challenge your dog’s mental abilities. A tired Whippet is a quiet Whippet.

It is possible to satisfy a Whippets exercise and mental needs at the same time. Have you considered agility training? A basic backyard course is rather easy to set up and will definitely challenge him. You can pick this set up on Amazon pretty inexpensively.

Hiding treats around the house and yard will also accomplish both tasks at once. Get creative to get him moving and thinking more.

Check out our guide to mental stimulation, here

While it may be tempting to yell at your dog when the barking just won’t stop, don’t do it. Take a deep breath and remember that your dog will only view your yelling as participation in the fun. Instead of added to the noise, patiently wait for a pause in the barking, and instantly reward him for being quiet. As hard as it may be, ignore the bad behavior and reward the good. Over time, he will learn that quiet earns a reward, not barking.

Crate training, when done correctly, provides your Whippet with a “room of his own” where he’ll feel safe and relaxed. The key is to teach the dog to associate crate time with comfort and security – never punishment.

When you need some quiet time and don’t want your dog underfoot, let him enjoy a nice nap in his crate. Just be sure there is a comfortable blanket or bed for him to snuggle into and that he’s had his exercise first so he’ll be sleepy.

Here’s the Crate We Recommend 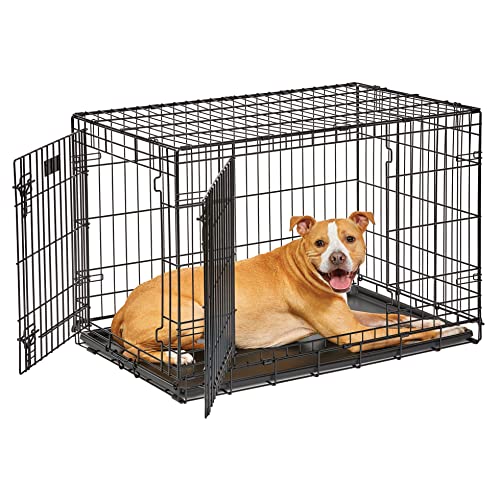 Other Behavior Problems With Whippets

Whippets occasionally suffer from separation anxiety when frequently left alone for long periods. This breed is very people-oriented and their desire for companionship is strong. Separation anxiety can lead to nuisance barking and destructive behaviors as well, so plan on being at home as much as possible to prevent these issues.

Another potential problem to be aware of is the breed’s strong prey drive. The instinct to chase after furry creatures is deeply ingrained and some Whippets just can’t control it. This can lead to disaster if your dog gets away from you, especially near a busy street.

Whippets are very athletic and, believe it or not, you may walk into the kitchen only to discover your Whippet on top of the counter helping himself to a snack. Some Whippets are described as springs ready to “boing” when the time is right and seem to have the idea that what is theirs is theirs, and what’s yours is theirs too!

What Owners Have to Say About Their Whippets…

Reasons their Whippet barks… “You hold a ball in the air without throwing it for longer than five seconds, the other whippet isn’t playing fair, the blankets are being frustrating and she can’t get under them on her own, the favorite food dish is empty even though the other one across the room is full, the neighbor’s dog “Belle” is anywhere within 100ft of our house, or the neighbors call Belle’s name.”

“Ours tends to be a more vocal whippet. He barks at cats in the yard and he tends to get chatty if he feels like he’s not getting enough attention with being pet or playing.”

“Mine barks when I’m holding a ball and she wants me to throw it. She is also very chatty in general.”

“Only when there’s a squirrel on the bird feeder. It’s not guaranteed and only because he’s been taught to. We have a theory that’s it’s only one specific squirrel, his mortal enemy. Other than that he’s pretty silent.”

“My whippet would scare himself when he barked.