Shih Tzus are very loving dogs, and you can usually see the love when looking into their eyes.

Unfortunately, other times, you look at their eyes and see something’s off, and that’s because Shih Tzu eye problems are pretty common.

What are the most common eye problems in Shih Tzus? Shih Tzus have short noses and bulging eyes, making them more prone to several different eye problems, including bacterial infections, eyelash issues and irritation, corneal ulcers, glaucoma, proptosis, cherry eye, and more. These issues can cause discomfort and vision loss in severe cases.

With attention and care, you can recognize symptoms before the issue develops into a serious one.

In the following, you’ll learn the signs of common eye problems and how to care for your Shih Tzu’s eyesight.

Their very large and exposed eyes make them prone to infections and irritations, and the discharge from their eyes is a welcoming environment for breeding bacteria.

So, be vigilant in looking out for symptoms of common Shih Tzu eye problems.

Shih Tzus have eye secretions that appear on the fur just below their eyes. Unless frequently cleaned, a buildup of these secretions can attract dirt and bacteria. Ultimately, it can lead to an eye infection.

Symptoms: Watery discharge or tearing, redness of the eye, sensitivity to light, pawing or rubbing at the eye

Treatment/Prognosis: Antibacterial eye drops from a veterinarian is often the course of action. Frequent removal of the glandular secretions can help avoid getting an eye infection again.

Dry and irritated eyes in Shih Tzus can happen because of many different things, like a distemper infection, trauma to the tear glands, antibiotics containing sulfa, and the lack of tear-producing tissues, which is usually inherited.

However, dry eyes in Shih Tzus are often an immune reaction that destroys their tear glands.

Treatment/Prognosis: Cyclosporine ointment or drops will suppress the immune reaction that causes dry eyes and irritation. Another option is surgery, where a saliva duct gets transplanted to the upper eyelid to provide necessary lubrication to the eyes.

Because of their protruding eyes, there’s a higher risk for Shih Tzus to have corneal ulcers resulting from an injury to their eyes. If the eye gets scratched deep enough, the cornea may ulcerate.

If you see a small round spot on the eye that has started to get slightly discolored, it’s also a good indication of an ulcer on the cornea.

Unfortunately, these scratches to the eyes are often not visible, so the dog could have this eye problem without you knowing.

Glaucoma in Shih Tzus can be a problem by itself or be caused by an infection, but usually, glaucoma happens because the liquids produced inside the eye don’t drain away properly.

If not treated, the problem can result in blindness.

Treatment/Prognosis: It depends on how severe the glaucoma is and its cause, but when there’s already blindness, the best thing to do is to remove the affected eye.

Both eye conditions are common in Shih Tzus, although not usually a combination of both.

Symptoms: Signs include excessive tearing, eye redness, and apparent swelling around the eyes.

Treatment/Prognosis: Lubricating ointments may help relieve symptoms. In terms of treatment, entropion and ectropion may require surgical correction, which involves removing a section of the eyelid to reverse its rolling.

This eye problem in Shih Tzus happens because of the eyelashes (as opposed to eyelids) or facial hair that grows toward the eyes, rubbing the eye’s surface in the process.

Trichiasis can also happen due to poor healing of eyelid wounds.

Symptoms: Excessive tearing in one or both eyes with no perceived real cause

Treatment/Prognosis: It’s usually corrected by surgery after a week of antibiotics and lubricating ointments.

This eye condition in Shih Tzus is where the eyelashes are abnormally located in their eyelid margin. There will be an extra row of eyelashes that will rub against the surface of the dog’s eye.

Signs: Tearing, redness of the conjunctiva, inflammation or ulcer in the cornea

Treatment/Prognosis: A veterinary ophthalmologist will remove the extra eyelashes and destroy their roots to keep them from growing back, either through chemical freezing or electrolysis.

This is one of the more unsightly eye problems in Shih Tzus. It resembles a bright, red cherry and happens when the prolapsed gland of their third eyelid pops out.

The condition is common in smaller dogs, especially breeds with short muzzles like Shih Tzus.

Symptoms: There’s only one symptom for the cherry eye: a circular red mass that protrudes from the side of the eye. It can happen on one or both eyes.

Treatment/Prognosis: Medical or surgical, depending on the diagnosis of the veterinarian. The vet may prescribe eye drops if the problem is new and recent, and if the medical treatment fails, the next course is surgery.

Shih Tzus have small eye sockets compared to their large eye size. Proptosis happens almost always because of severe trauma to the head, causing the entire eyeball to become displaced.

It can be caused by a dogfight, getting hit by a blunt object, choking, or stumbling and falling, any of which can cause head injuries resulting in this condition.

Treatment/Prognosis: Two things can be done if the dog has proptosis: either put the eye back in place or remove the eye if necessary.

PRA is an inherited eye disease recognized in 86 different dog breeds, including Shih Tzus. It destroys the retinal cells, which eventually leads to blindness.

Shih Tzus often get late-onset PRA and are usually not affected until they mature or reach a year old.

Symptoms: It will begin as night blindness, which usually starts between 2-5 years of age, developing into vision loss and, ultimately, blindness.

Treatment/Prognosis: Unfortunately, there is no cure for PRA.

Retinal detachment in Shih Tzus may be caused by inflammation, trauma, vascular diseases, or congenital defects. The condition occurs when the retina gets separated from the eyeball itself.

Treatment/Prognosis: Medication could be utilized when retinal detachment is caught early, but surgery is often needed.

Pigmentary keratitis or keratopathy is a frequent cause of blindness in dog breeds like Shih Tzu.

It’s a painful condition where the once-clear cornea starts to get opaque and scarred, which leads to impaired vision.

Symptoms: Redness and increased eye discharge are common; the eye can start appearing cloudy or white because of scarring.

Treatment/Prognosis: There is no cure for this eye problem, but treatments are available to halt its progression. Surgery slows the pigment from forming and damaging eyesight but rarely stops it entirely.

How Do I Know If My Shih Tzu Has an Eye Infection?

Some common symptoms that indicate your dog could be suffering from an eye infection include:

Is It Common for Shih Tzus to Lose an Eye?

Shih Tzus are prone to eye problems that can cause eye trauma and blindness, and when that happens, removing the eye is sometimes the best course.

At What Age Do Shih Tzus Commonly Go Blind?

The age at which blindness can occur in Shih Tzus  depends on several factors, so there really isn’t an estimated age that the problem is most likely to occur.

However, most eye problems in Shih Tzus that can result in blindness start when they are just two years old, although it will take up to five years for their retina cells to die.

What Can I Use to Clean My Shih Tzus Eyes?

You can use a wet cotton ball, soft washcloth, or dog eye wipes, like this pre-soaked pads, to wash and clean the area surrounding your Shih Tzu’s eyes, starting from the inner corner of the eye going outwards. 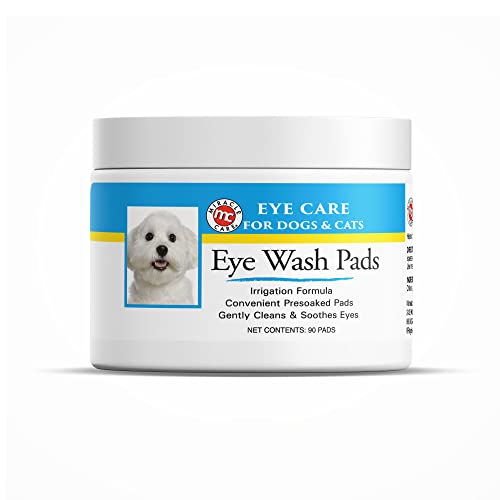 As such, it’s important to treat any sign of distress as something serious and seek a veterinarian before the problem worsens.